A claim that the novel coronavirus was never detected in the major Chinese cities of Beijing and Shanghai has been shared repeatedly on Facebook, Twitter and Instagram. The claim is false; both Beijing and Shanghai, China's two most populous cities, have reported confirmed COVID-19 cases and deaths since January 2020. 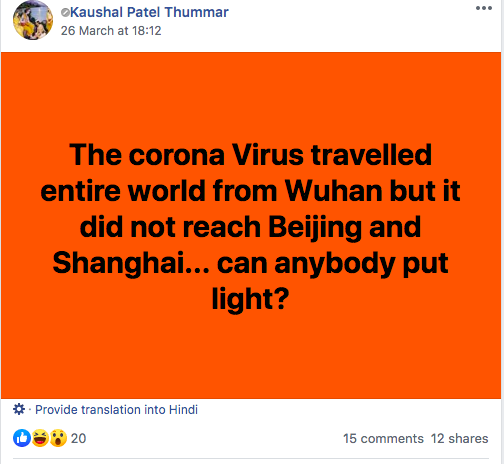 The text post reads: "The corona Virus travelled entire world from Wuhan but it did not reach Beijing and Shanghai… can anybody put light?"

The novel coronavirus, which causes the disease COVID-19, was first detected in the Chinese city of Wuhan in late 2019. As of April 13, 2020, COVID-19 has killed more than 106,000 people and infected nearly 1.7 million others worldwide, according to the World Health Organization.

As of April 12, 2020, Shanghai, China's financial hub, has reported 607 confirmed cases of COVID-19, while the Chinese capital of Beijing has reported 589 confirmed cases, according to statistics from China's National Health Commission published by state news agency Xinhua.

Following the viral outbreak, authorities also shut down major tourist attractions and cancelled Chinese New Year celebrations in both Beijing and Shanghai as the cities scrambled to stop the spread of novel coronavirus, reported here by AFP.