An image showing a purported tweet from Donald Trump reading "THE NEXT 30 TO 60 DAYS WILL BE THE BIGGEST DRAINING OF THE SWAMP EVER" has been shared hundreds of times on Facebook. The image is misleading; the image shows a screenshot of a hoax account purporting to be the US president.

The claim was posted to Facebook by a New Zealand-based user here. The post have been shared over 200 times. 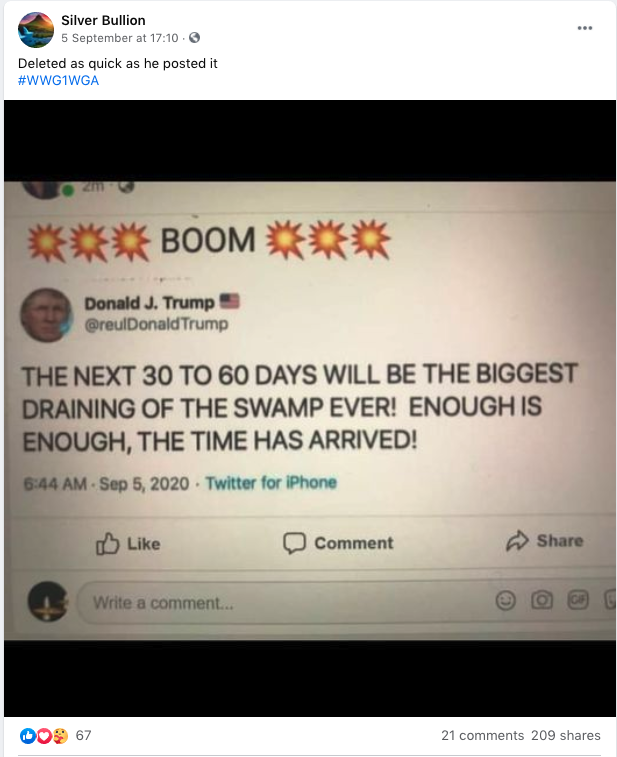 A screenshot of the misleading image, taken September 8, 2020.

Also Read: Did Nancy Pelosi Say She Will Resign If Donald Trump Is Re-elected?

The image features a screenshot of what appears to be a tweet from the US President Donald Trump.

The tweet reads: "THE NEXT 30 TO 60 DAYS WILL BE THE BIGGEST DRAINING OF THE SWAMP EVER! ENOUGH IS ENOUGH, THE TIME HAS ARRIVED!"

The Facebook post's caption reads: "deleted as quick as he posted it #WWG1WGA".

A similar image was also shared hundreds of times here, here and here.

The image, however, is misleading.

The image clearly shows the handle of the account where the tweet originated from as @reulDonaldTrump, while the actual Twitter handle of the US president is @realDonaldTrump. Trump's real account can be seen here.

Trump's tweets are also accompanied by a blue tick after his username, which means Twitter has verified the account.

The tweet featured in the widely shared misleading screenshot doesn't include the blue tick after the username, rather in the profile's photo.

The caption WWG1WA is a reference to the widely debunked conspiracy theory QANON, which AFP has reported was recently removed from Facebook for its ties to violence.