Social media posts shared thousands of times attribute comments describing the dangers of the coronavirus and criticizing those who do not take it seriously to Dr. Anthony Fauci. This is false; the National Institute of Allergy and Infectious Diseases -- which Fauci heads -- said he has "never used" some of the language the comments contain, and a Facebook user said she authored the original version.

"From Dr. Fauci," begins a July 17, 2020 Facebook post, before discussing the impact of well-known viruses including chickenpox, herpes and HIV.

"Now with COVID-19, we have a novel virus that spreads rapidly and easily. The full spectrum of symptoms and health effects is only just beginning to be cataloged, much less understood," it says.

"For those in our society who suggest that people being cautious are cowards, for people who refuse to take even the simplest of precautions to protect themselves and those around them, I want to ask, without hyperbole and in all sincerity: How dare you?" the post says. The comments have been attributed to Fauci on Facebook here and here and on Twitter here and here, but have also circulated without his name attached, including here and here.

Fauci, 79, has advised six presidents since becoming head of the National Institute of Allergy and Infectious Diseases (NIAID) in 1984, and led US government efforts to counter diseases including HIV/AIDS. But he has become far more widely known during the coronavirus crisis, and has been increasingly drawn into conflict with President Donald Trump.

The comments being attributed to Fauci is just the latest example of text written by others circulating on social media under a famous person's name. AFP Fact Check has previously debunked posts falsely attributed to Tim Allen, Ron Howard and Serena Williams.

The general sentiment of the comments -- that people should take the coronavirus seriously -- is in keeping with Fauci's stance, but he is not their author.

NIAID told AFP by email that "he has never used language like this," citing lines including "how dare you risk the lives of others so cavalierly" and "how dare you behave as though you know more than medical experts."

Facebook user Amy Wright said that she in fact wrote the comments, having posted the text on Facebook on June 14 with the opening: "Here is my take."

In comments on the post, Wright confirmed that she wrote it, and also expressed surprise that it was being misattributed. 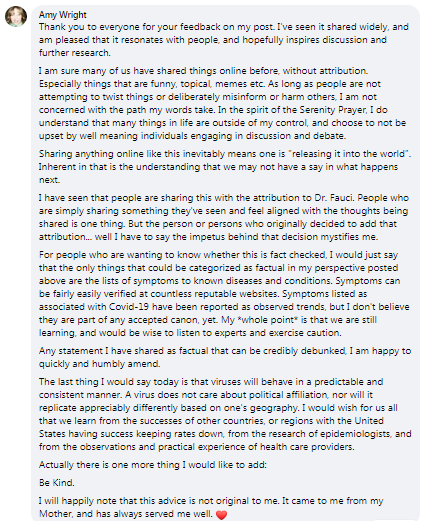 "I have seen that people are sharing this with the attribution to Dr. Fauci. People who are simply sharing something they've seen and feel aligned with the thoughts being shared is one thing," she wrote.

"But the person or persons who originally decided to add that attribution... well I have to say the impetus behind that decision mystifies me."

AFP Fact Check has debunked more than 560 examples of false or misleading information about the novel coronavirus crisis. A complete list of our fact checks on the topic in English can be found here.

Claim :   Dr. Anthony Fauci wrote a post describing the dangers of the coronavirus and criticizing those who do not take it seriously.
Claimed By :  Posts on Facebook and Twitter
Fact Check :  False
Dr. Anthony Fauci Anthony Fauci National Institute of Allergy and Infectious Diseases Chicken Pox President Donald Trump Donald Trump COVID-19 COVID-19 Outbreak COVID-19 Pandemic Coronavirus Coronavirus Pandemic Coronavirus Outbreak COVID-19 Vaccine COVID-19 Cure Coronavirus Cure Coronavirus Vaccine Face Masks Face Mask Mask Masks
If you value our work, we have an ask: Our journalists work with TruthSeekers like you to publish fact-checks, explainers, ground reports and media literacy content. Much of this work involves using investigative methods and forensic tools. Our work is resource-intensive, and we rely on our readers to fund our work. Support us so we can continue our work of decluttering the information landscape. BECOME A MEMBER
📧 Subscribe to our newsletter here. 📣You can also follow us on Twitter, Facebook, Instagram, Youtube, Linkedin and Google News