Donald Trump Jr, US President Donald Trump's eldest son, tweeted that the flu killed 75,000 Americans last year and nearly none this year, suggesting that deaths are being miscounted to "manipulate the truth" about the coronavirus pandemic. This is false; US Centers for Disease Control and Prevention (CDC) has counted about 8,000 flu deaths so far in 2020, which are reported separately from COVID-19 deaths. Last season's flu killed between 24,000 and 62,000 Americans, not 75,000.

"We went from 75,000 flu deaths last year in America to almost 0. Does anyone actually believe that? Or do you think there may be allocation games being played to manipulate the truth?" Trump Jr tweeted on October 26, 2020. The post has been retweeted more than 26,000 times. 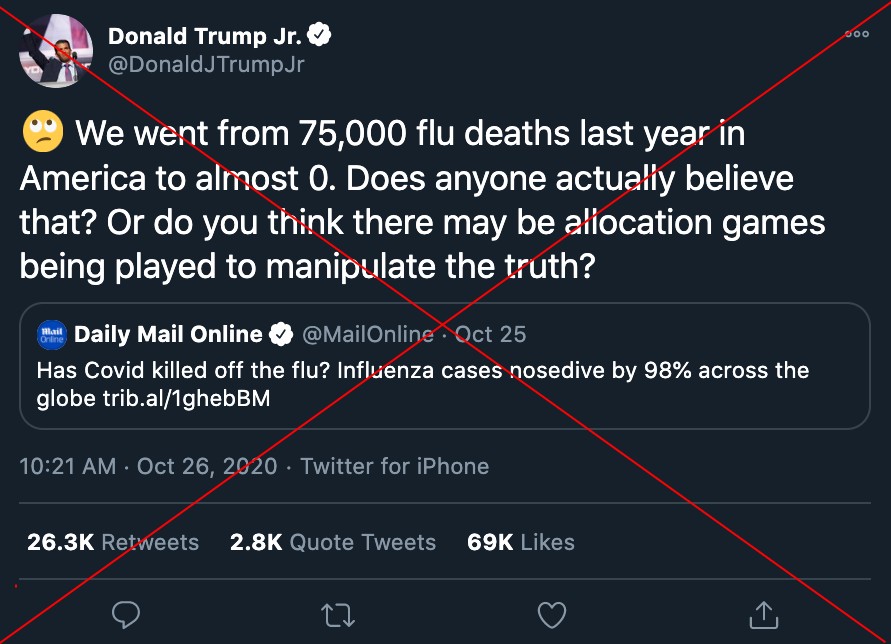 Screenshot of a tweet with a false claim, taken on October 28, 2020

Trump Jr's tweet quickly spread to Facebook, where screenshots of it were shared thousands of times, including here, here and here.

Also Read: Trump And Biden Camps Target Each Other With Misinformation Campaigns

The tweet cites an article from UK outlet the Daily Mail, but this story refers mainly to World Health Organization (WHO) flu data from Australia and Chile, southern hemisphere countries that already had their flu season during US summer months.

"It was unexpected and very surprising but literally there was nearly no flu this year in the Southern Hemisphere," she said. "So we hope that the situation will be the same in the Northern Hemisphere."

Briand explained at the conference and in another video that lower flu rates in the Southern Hemisphere are likely thanks to public health measures undertaken to prevent the spread of Covid-19, like physical distancing and frequent hand washing.

"We cannot be certain that this will be the case for the Northern Hemisphere in this fall and winter, but we can hope for the best."

A CDC study published in September concluded that decreased flu cases during the Covid-19 pandemic in Australia, Chile and South Africa indicate that efforts to tackle coronavirus -- teamed with flu vaccines -- "could substantially reduce influenza incidence and impact in the 2020–21 Northern Hemisphere season."

Tracking flu in US

The CDC tracks flu data by season, the exact dates of which vary year to year, but span from fall to spring of the next year. Flu fatalities are estimated weekly based on death certificate data by the National Center for Health Statistics (NCHS), part of the CDC.

The NCHS estimates that more than 8,000 Americans died from the flu so far in 2020, according to a tally of its weekly data, not "almost 0." The same tally method yields around 7,250 deaths recorded in 2019.

The data comes with caveats: this 2019-2020 burden range is not yet finalized, and numbers are updated as new data is reported. In addition, because flu is not a reportable disease in most areas of the US, surveillance doesn't capture all US cases of flu that occur. The CDC "provides these estimated ranges to better reflect the larger burden of the illness."

Since about six months remain in the current US flu season, it is too early to have a full picture of the severity of the illness.

Misinformation about the flu and COVID-19 undermines US health officials' efforts to fight both viruses.

Libby Richards, associate professor at the Purdue School of Nursing in Indiana, warned that getting a flu shot is "more important than ever this year". She said that severe cases of Covid-19 and the flu require the same life-saving equipment.

A second set of claims echoed mistrust about the number of flu cases in the US.

"Covid cured the flu," declares an October 21, 2020 post which features an image of a Fox News broadcast comparing 2019 and current case counts. 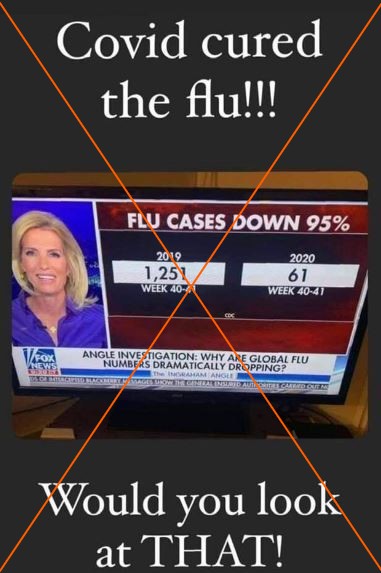 Similar claims are circulating on Facebook here, here and here.

These claims are part of a larger pattern of distrust and skepticism about the severity of COVID-19, which has killed more than 227,000 people in the US, the largest death toll of any country in the world.

AFP Fact Check previously reported on the false claim that the CDC included flu and pneumonia deaths in the COVID-19 death count. The NCHS only records those who died from COVID-19 in its toll for the disease.

In August, President Trump retweeted a false claim that the CDC cut the national COVID-19 death toll by 94 percent.