A video has been viewed thousands of times on Facebook, Twitter and YouTube alongside a claim it shows a US soldier spreading the novel coronavirus, COVID-19, by wiping his saliva on a subway train handrail in the Chinese city of Wuhan in October 2019. The claim is false; the video circulated in reports in March 2020 about an incident on a subway in Belgium; the Belgian transport body said the man in the video had been arrested over the incident.

The 27-second video shows a man on a subway train lowering his facemask before lick his fingers and rubbing them on a handrail.

The simplified Chinese text superimposed on the clip translates to English as: "During Military World Games/American person spread virus/Pay attention to this/The United States is evil".

Also read: Message Claiming Coronavirus Can Last Up To 8 Hours In Air Is Misleading 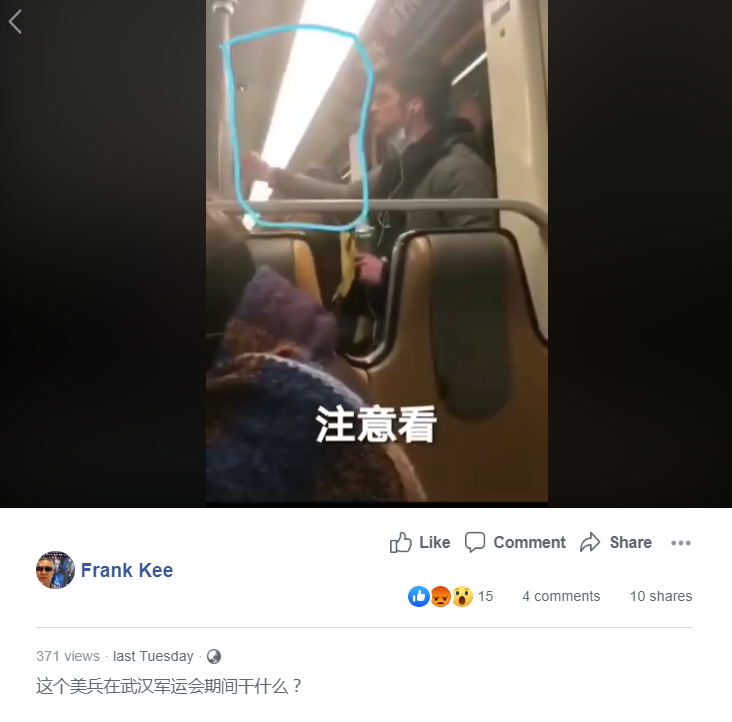 The post's caption, written in a mix of English and simplified Chinese characters, reads: "Just to share this clip and its comments from China: Wuhan's security cameras all recorded American soldiers' itinerary route at that time. This American soldier, as the Military World Games was going on, had already worn a mask. Started to spread the epidemic virus by taking subway. Let's take a detailed look at his hand movement, from the mouth to the handrail, from which we will know the evil and vicious heart of Americans. Poor Wuhan citizens, they were then infected by the merciless epidemic virus."

COVID-19 was first detected in the central Chinese city of Wuhan in December 2019 and has since spread worldwide. According to data from the World Health Organization (WHO), the pandemic has killed more than 14,510 people and infected some 332,930 others globally.

A combined keyword and reverse image search using keyframes extracted from the video found this March 11, 2020 article by UK-based newspaper The Independent, headlined: "Coronavirus: Man arrested after licking his fingers and wiping them on pole in train".

The report reads, in part: "A train passenger has been arrested after he was filmed licking his fingers and wiping them on a vertical handrail in Belgium.

"Belgium's transport authority, the Societe des Transports Intercommunaux de Bruxelles (STIB-MBIV), replied to a social media user who posted the video that the man was drunk and arrested by police."

A screenshot of the footage is included in the article, credited to Twitter user SoulOff, alongside a caption that reads: "A man who was filmed licking his fingers and wiping them on a handrail on public transport was arrested by Belgian authorities".

Below is a screenshot of The Independent article: 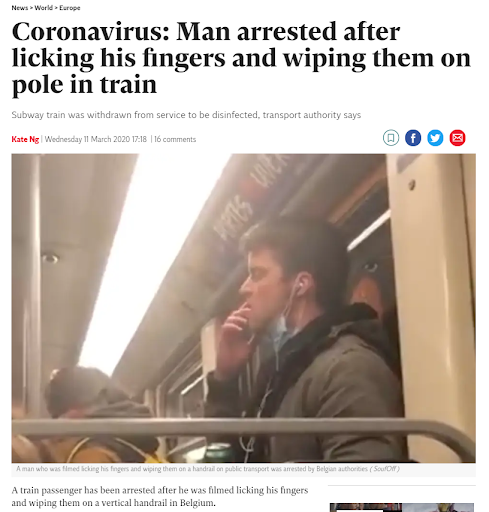 Screenshot of The Independent article

Belgium's STIB-MBIV addressed the video in this tweet dated March 10, 2020, stating the man had been arrested.

"The man (intoxicated) was arrested by the police and our security service. The subway train was withdrawn from service to be disinfected. Thank you for your message. Our metros are cleaned every day."

Wuhan Coronavirus COVID-19 Fake news around coronavirus
Next Story
Our website is made possible by displaying online advertisements to our visitors.
Please consider supporting us by disabling your ad blocker. Please reload after ad blocker is disabled.
X
X