A photo has been shared hundreds of times in multiple posts on Weibo, Twitter and Facebook alongside a claim it shows a brothel in Europe where 86 people were quarantined due to the novel coronavirus epidemic. The claim circulated in posts in English, German, Spanish and Portuguese. The claim is false; it originated on a satirical website based in Spain; the image in the posts shows a nightclub in the coastal Spanish city of Marbella.

This Weibo post was shared on March 2 by a user with more than two million followers.

The simplified Chinese-language caption of the post translates to English as: "86 people in Italy have been asked to quarantine in a brothel for 14 days". 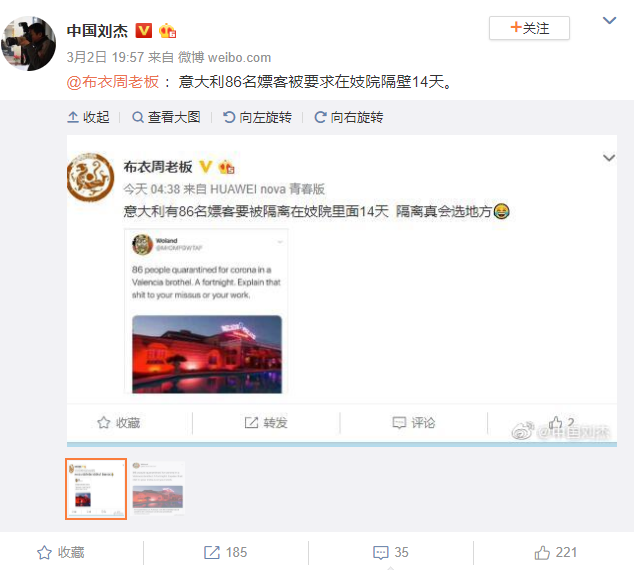 Italy has imposed a national lockdown due to the novel coronavirus epidemic, which had killed more than 4,000 people and infected more than 110,000 others worldwide, as reported by AFP here and here.

The photo was also shared here, here, here and here on Weibo alongside an identical claim.

The same image was also shared here, here, here and here on Twitter alongside a claim that the 86 people were quarantined in a brothel in Valencia, Spain.

A similar claim about the Spanish brothel also circulated in other languages, including here and here in German; here in Spanish and here in Portuguese.

Both claims are false; they emerged on a satirical website based in Malaga, Spain.

Some of the social media posts included a link to this Spanish-language article published by the Cerebrother website on February 26.

Translated from Spanish to English, the article states in part: "A brothel is in quarantine with 86 clients after a prostitute tested positive for Coronavirus

"Agents of the National Police have been guarding the club 'The Black Forest' of Valencia where this morning a girl who worked there was tested positive for Coronavirus following orders from the health authorities, as reported by various police sources.

"The girl's test result obtained earlier today has forced the quarantine of 86 customers who were inside the building at that time. The employee, who is now admitted to the University Hospital, had slept with several clients that same night."

Below is a screenshot of the Cerebrother article: 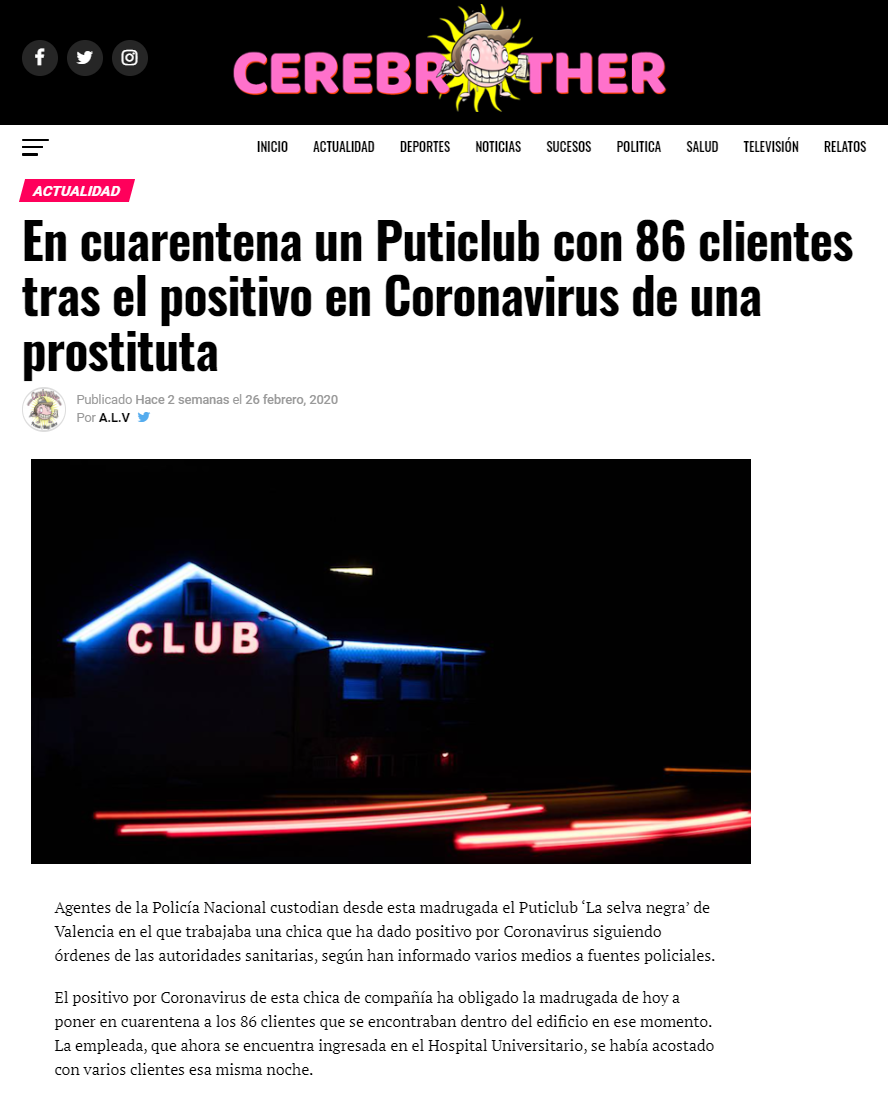 The website, which is based in Malaga, Spain, states in its disclaimer: "The portal 'CEREBROTHER' is a satirical newspaper whose sole purpose is entertainment. All its content is fiction and does not correspond to reality. All references, names, brands or institutions that appear on the web are used as contextual elements, as in any novel or fiction story."

A reverse image search on Google found the photo in the misleading posts published in this article in May 2019 by Marbella Confidencial, a news site based in the southern Spanish city of Marbella.

ALSO READ: No, Employer Did Not Hide Work From Home Advice On COVID-19 Poster

The image's caption translates to English in part as: "Interior view of Milady Palace Club in Marbella".

Below is a screenshot comparison of the photo in the misleading posts (L) and the Marbella Confidencial image (R):

ALSO READ: Did These Books Predict The Coronavirus Outbreak?