A photo has been shared hundreds of times in multiple Chinese-language posts on Facebook and Twitter which claim it shows a mass burial ground for "virus victims". The posts were published after the novel coronavirus, COVID-19, spread to dozens of countries after it was first detected in the Chinese city of Wuhan in December 2019. The claim is false; the image is a screenshot taken from the trailer of the 2011 movie Contagion.

This photo has been shared nearly 300 times after being posted to Facebook on February 25.

Part of the simplified Chinese-language caption translates to English as: "This is a mass burial ground for tens of thousands of virus victims. The cremation furnace running 24 hours a day cannot meet demand due to the large number of bodies." 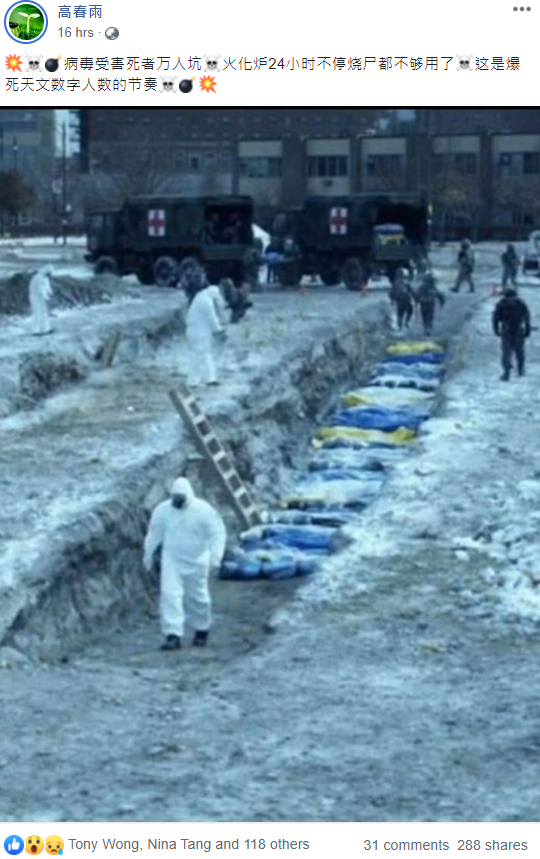 The claim is false; the photo is a screenshot taken from a 2011 movie trailer.

The photo in the misleading posts can be seen at the two-minute 17-second mark of the YouTube video.

Below is a screenshot comparison between the photo in the misleading posts (L) and a keyframe from the YouTube video (R): Contagion is a 2011 movie starring Matt Damon, Kate Winslet and Jude Law. Movie database IMDb describes the film as: "Healthcare professionals, government officials and everyday people find themselves in the midst of a worldwide epidemic as the CDC works to find a cure."

Claim :   Image shows mass burial ground for tens of thousands of Coronavirus victims, since cremation furnace running 24 hours a day cannot meet demand due to the large number of bodies.
Claimed By :  Social Media users
Fact Check :  False
Contagion Coronavirus Gwenyth Paltrow Coronavirus fake news Coronavirus outbreak Coronavirus disease Coronavirus China wuhan coronavirus Sci Fi Film Viral Image Fake News Misinformation
If you value our work, we have an ask: Our journalists work with TruthSeekers like you to publish fact-checks, explainers, ground reports and media literacy content. Much of this work involves using investigative methods and forensic tools. Our work is resource-intensive, and we rely on our readers to fund our work. Support us so we can continue our work of decluttering the information landscape. BECOME A MEMBER
📧 Subscribe to our newsletter here. 📣You can also follow us on Twitter, Facebook, Instagram, Youtube, Linkedin and Google News