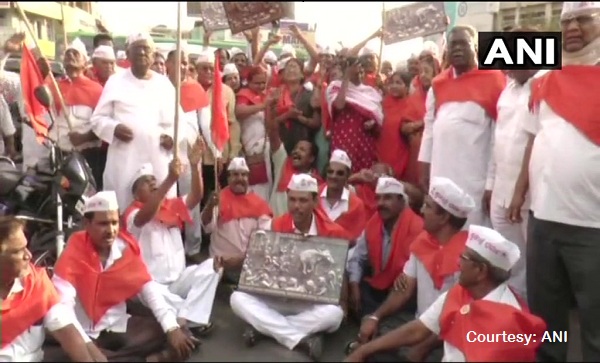 The Karnataka government on March 22, 2018 granted minority status to 'Lingayats' and 'Veerashaivas' who believe in Basava Tatvaas. The issue of granting a separate religious identity to the numerically significant and politically decisive community has become a hot potato in poll-bound Karnataka.

Meanwhile the Veerashaiva Mahasabha on March 23 rejected the minority tag at its executive body meeting held in Bengaluru.

If you are really interested in the community say #Veerashaiva and #Lingayat is one and the same. Except this, the govt is saying everything else. Don't create differences between person to person & within the community: All India #Veerashaiva Mahasabha at Bengaluru, Karnataka pic.twitter.com/gxa4qZjUzU

The ball is now in the centre's court after the Siddaramaiah-led government sought the NDA's nod following his government's acceptance on March 19 of the recommendations of a committee it had appointed to study the issue. Headed by retired high court Judge HN Nagamohan Das, the seven member committee formed in December 2017 submitted its report on March 2 stating that Lingayats in Karnataka should be considered as a religious minority.

But who exactly are the Lingayats and Veerashaivas? And are they the same? BOOM finds out.

Who are the Lingayats?

Lingayats are members of a distinct Shaivite religious tradition whose origins can be traced to the 12th century A.D. While oral traditions attribute poet-philosopher-social reformer Basaveshwara or Basavanna (as he is locally known) as the founder of Lingayatism, several scholars believe that the philosopher only revived and extended an already existing belief system. Lingayats worship Shiva, one of the Hindu Trimurti, and wear the 'Ishtlinga', a symbolic representation of the inner conscience, as a ritual and a mark of their identity.

How Lingayats see themselves separate from Hindus:

Basavanna and his followers (called the “Sharanas”) rejected the supreme authority of the Vedas, the Puranas, the Smritis and the Shastras. Instead, they composed several literary works, collectively referred to as Vachanas, which outlay the basic tenets of the Lingayat faith and echoes its dissent from conventional Hinduism. Lingayatism emerged as a mass reactionary movement against Brahmanical Hinduism in medieval Karnataka during the period of the Kalchuri dynasty. They revolted against orthodox Hindu beliefs and practices. The Lingayats shunned superstitions, denounced the need for pilgrimages and holy sites, abhorred worship of idols, and abandoned the fundamental Hindu doctrines of polytheism, reincarnation and karma.

Former IAS officer, SM Jamdaar, who is spearheading the Lingayat movement for a separate religious identity, told Scroll that Lingayatism “is perhaps the only Indian religion which rejects all the traditional authorities of Hinduism in such harsh terms.”

The late firebrand journalist Gauri Lankesh, a Lingayat herself, noted in a column she wrote for The Wire in August 2017, that Lingayats “rejected everything about the Hindu religion and rebelled against it.” “This is the reason why, for over eight decades, Lingayats have been asking to be considered as a religion separate from Hinduism,” Gauri had written then.

Are Lingayats and Veerashaivas the same?

The Veerashaivas are a sub-tradition of Shaivism, and their history predates Basavanna. Unlike the Lingayats, they uphold the authority of the Hindu scriptures and rituals. The close association of Lingayatism with Shaivism, one of the two broad categories of Hinduism, have often resulted in Lingayats being viewed as Veerashaivas. Over the years, particularly since the 18th century, this has become the context of an enduring historical as well as theological debate.

Why are they demanding a separate religion now?

Over the last two decades, scholars like M.M. Kalburgi, T.R. Chandrashekhar, and others have scrutinised the Vachanas (literary works) and the practices of the early Sharanas (followers of Basavanna) to establish the sharp distinctions between Lingayitism and Veerashaivism. Such works have largely formed the empirical basis behind the Lingayat demand for a separate religion. Subsequently, Lingayat scholars have contested that Basavanna’s movement emerged as a social and ideological rebellion against Hinduism, just like the Buddhist or Jainist movements of the past. Thus, they argue, that Lingayatism too should be recognised as a separate religion.

How old is the movement?

The Lingayats’ demand for constitutional recognition of Lingayatism as a separate religion is several decades old. They argue that the community was considered as a separate religion until the 1881 census of the Mysore state, which merged the Lingayats with Hindus. In the early 20th century, the All India Veerashaiva Mahasabha was formed and several attempts have since been made to restore the exclusive religious identity to the community.

The movement has gathered momentum only in the recent years. It gained national attention in July 2017 when thousands of members of the community from Karnataka and several other states gathered in the state’s north-eastern district of Bidar. In what appeared to be a massive show of strength, the Lingayats reiterated their demand for a separate religious tag and submitted a memorandum to Karnataka Chief Minister, Siddaramiah, to take up the community’s demand with the Centre. The rally took place a week after the CM vowed to negotiate their demand with the central government if the demand was unanimous. Subsequently, the Karnataka government set up a 7- member committee in late December 2017 under Justice Nagamohan Das to evaluate the matter and suggest recommendations.

What are the political ramifications of Siddaramaiah's move?

Lingayats have grown to be the most dominant and influential community in present-day Karnataka. Amounting to about 17 percent of the state’s total population, they play a significant role in dictating Karnataka’s political equations. While many see Siddaramiah’s move as a strategic attempt to consolidate the community’s vote bank in the favour of the Congress, the Bharatiya Janata Party (BJP) risks losing its Lingayat-dominated strongholds in north Karnataka, on whose back the party had come to power in 2008.

Given that the BJP has fielded a Lingayat strongman in the form of B.S. Yeddyurappa as its chief ministerial candidate, Siddaramiah’s decision threatens to throw BJP's electoral math out of whack. The National Herald, a Congress mouthpiece, has called the move BJP’s catch 22 situation.

A normally outspoken and combative Yeddyurappa broke his silence on the issue recently when he denied news reports that he had signed a memorandum by the All India Veerashaiva Mahasabha in 2013 seeking independent religion status for Lingayats, submitted to the then Prime Minister Manmohan Singh.

The Bharatiya Janata Party has lambasted the Congress government accusing it of political opportunism. Several media reports also stated that in 2013 a Congress-led UPA government had rejected the community's demand of a separate religious status.

However, according to an article in the Bangalore Mirror, citing a member of the Veerashaiva Mahasabha, the appeal in 2013 had not been rejected but is still under consideration.

The president of the Mahasabha was reported to have said imposing of the Basava philosophy on Veerashaivas was unconstitutional and it was only the 2013 petition that must hold sway. He was also reported to have said the Congress state government was trying to divide the community for its own gains.

The Veerashaiva Mahasabha has now decided to urge Prime Minister Narendra Modi as well as the Home Minister to reconsider the appeal made in 2013 to grant a separate religious status to 'Veerashaiva Lingayats'.

Karnataka Karnataka elections Lingayat minority status Religion Siddaramaiah state elections Veerashaivas Yeddyurappa
If you value our work, we have an ask: Our journalists work with TruthSeekers like you to publish fact-checks, explainers, ground reports and media literacy content. Much of this work involves using investigative methods and forensic tools. Our work is resource-intensive, and we rely on our readers to fund our work. Support us so we can continue our work of decluttering the information landscape. BECOME A MEMBER
📧 Subscribe to our newsletter here. 📣You can also follow us on Twitter, Facebook, Instagram, Youtube, Linkedin and Google News