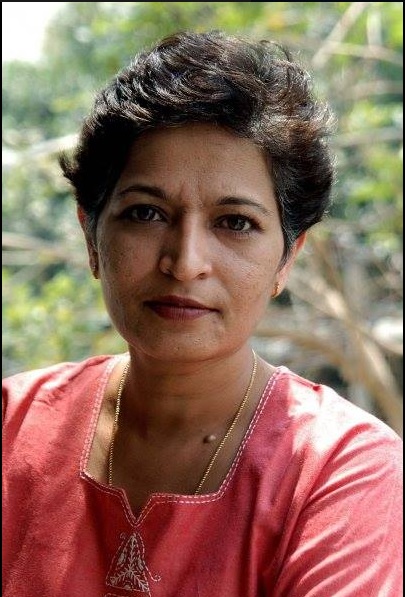 Gauri Lankesh, senior journalist and editor of Gauri Lankesh Patrike, a Kannada weekly was shot dead Tuesday evening outside her home in Bengaluru by unidentified men. Lankesh, known for her blunt views about the RSS and right wing majoritarian ideology, had finalised her editorial for the week on fake news before being shot dead. Her last editorial focused on the menace of fake news and recounted her own battle with it when she fell victim once unknowingly for which she expressed regret. Ironically, Lankesh became the target of fake news, two days after her death when posts on Facebook and Twitter called her a Christian and renamed her Gauri Lankesh 'Patrick'.

Lankesh ends the editorial on a confident note, saluting those exposing fake news and hoping there will be more fake news busters.

We are republishing the English translation of Lankesh's editorial, first published on the newslaundry.com.

In this week’s issue, my friend Dr Vasu wrote about the fake news factories in India which are similar to those of Goebbels. Most of these factories of lies are run by followers of Modi. I will try to explain the damage which is being done by these factories in my editorial. Ganesh Chaturthi was celebrated a few days back. A lie was propagated that day on social media by the people of the Sangh. It said a Lord Ganesha idol can be installed only at a place identified by the Karnataka government, one has to deposit Rs 10 lakh before installing the idol, they have to take the government's permission on the height of the idol, and for immersion they have to take a route where people from other religions don’t live and without fireworks. This lie has escalated so much that at the end, RK Dutta, the DGP, Karnataka Police, had to call a press conference and make it clear that the government had not made any such rule. All of this was a lie.

When we tried to reach to the source of this lie, we landed on a website named postcard.news. This website is run by fanatic Hindutva followers. The main work of this website is to make fake news every day and spread it on social media. On August 11, there was a hoarding on the website saying Taliban government in Karnataka. They tried to propagate the lie in the whole state with the help of this hoarding. The people of Sangh were successful in doing it. People who are angry with the Siddaramaiah government for some reason or the other used this fake news as their weapon. The most surprising and sad part is that people believed it without even thinking about it. They did not use their brains.

Last week, when a court convicted an impersonator, Gurmeet Ram Rahim Singh, for rape, a lot of his photos with BJP leaders became viral on social media. The photos and videos of Modi, as well as MLAs of Haryana with the impersonator, were becoming viral. This disturbed the people of the BJP and the Sangh. To counter this, a photo of Pinarayi Vijayan sitting with Gurmeet Baba was made viral by them. This photo was morphed. In the original photo, Congress leader Oommen Chandy is sitting with the baba but Vijayan's head was morphed onto the body and the people of the Sangh made it viral. Thankfully, this propaganda of Sangh did not succeed because a few people immediately brought out the original photo and put out the truth on social media.'

Actually, until last year there was no one to expose or stop the fake news propaganda of RSS, but now lots of people are coming up against it, which is good. Earlier such fake news used to go viral but now the real news is also getting viral and people are reading them also.

For example, on August 15, when Prime Minister Modi delivered his speech from Red Fort, an analysis of it became viral on August 17. Dhruv Rathi analysed it. Dhruv Rathi looks like a college boy, but for the past several months he is exposing the lies of Modi on social media. Earlier such videos were visible to people like us only and not reaching the common man but the video of August 17 reached more than one lakh people in one day.

In the video, Dhruv Rathi says the government of ‘Boosi Basiya’ [Gauri Lankesh used to address Modi as Boosi Basiya often, it means someone who lies whenever he speaks] said a month earlier in the Rajya Sabha that there are 33 lakh new taxpayers. Prior to this, Finance Minister Arun Jaitley said there are 91 lakh new tax payers. The Economic Survey said only 5.40 lakh new tax payers are there. Which of this figure is right? This was the question posed by Dhruv Rathi in his video.

Today’s mainstream media is spreading the information given by the BJP government as if it's the Vedas. TV news channels are much ahead in this. For example when Ramnath Kovind took oath as President of India, many English news channels ran the news that the Twitter followers of Kovind reached to 30 lakh within an hour. They kept on shouting this. Their motive was to tell that there is such a huge support for Kovind. Many news channels are like the team of RSS. They work for the Sangh. Whereas the truth was that the official account of former President Pranab Mukherjee was now in the name of new President. When this change happened, the followers of Rashtrapati Bhavan became Kovind's followers. Another thing to be noticed is that even Pranab Mukherjee was followed by more than 30 lakh people on Twitter.

Today, many people have come forward to speak the truth about fake news of this kind being propagated by the RSS. Dhruv Rathi is doing this through videos. Pratik Sinha is doing this through altnews.in. Websites like SMHoaxslayer, BOOM and Fact Check are also doing the same work. Also, websites like newslaundry.com, thewire.in, scroll.in, thequint.com are also active. All the people whom I have named have recently exposed many fake news. People of Sangh are upset with them. Another important thing is that these people are not working for money. Their only aim is to bring the fascist people’s factory of lies in front of the public.

A few weeks ago, there was heavy rain in Bengaluru. At that time, people from Sangh made a photo viral which was captioned that NASA released a photo of people walking on Mars. The Bengaluru Municipal Corporation released the statement saying that this is not the photograph of Mars. The motive of Sangh was to make fun of Bengaluru by terming it as Mars so that people can understand that Siddaramaiah government has done no work in Bengaluru, the roads have gone bad, the purpose of Sangh was to disseminate false news through propaganda. But this backfired on them because the photo was not of Bengaluru but from Maharashtra where there is a BJP government at the helm.

Recently, during the riots in West Bengal, the people from RSS released two posters. The caption of one poster was, Bengal is burning, where a property which was set on fire was shown. The second poster showed a woman whose saree was being pulled, which was captioned ‘Hindu women are being tortured in Bengal’. Very soon the truth of the photos came in front of everyone. The first photo was from the 2002 Gujarat riots when Modi was the state chief minister and the second photo was a scene from a Bhojpuri movie. Not only the RSS, but also the cabinet ministers of the BJP are masters in spreading such fake news. For example, Union Minister Nitin Gadkari shared a photo where a few people were setting the national flag on fire. The caption said on the occasion of Republic Day, the national flag was set on fire in Hyderabad. Recently, a Google image search has come up with a new application where you can put any image and get to know the photo is from which place and from when. Pratik Sinha did the same and exposed the truth of the photo shared by Gadkari through that application. It then came to the light that this photo is not of Hyderabad but from Pakistan, where a restricted fundamentalist organisation burned the Indian flag as a protest.

Similarly, during a TV panel discussion, Sambit Patra, a BJP spokesperson, said that there are problems in hoisting the flag on the borders by soldiers, then what is the problem in hoisting the flag in universities like JNU. Sambit asked this question and then showed a photo. Later it was known that this was a famous photo but not of Indian soldiers but American soldiers. The photo was taken during World War II, when American soldiers captured a Japanese island [Iwo Jima] and hoisted their flag. But Sambit was dodging people by using photoshop. This also backfired on him and he was trolled by many people on Twitter.

Recently, Union Minister Piyush Goyal shared a photo. It was written that the government had installed LED bulbs on 50,000 km of roads. But the photo which he shared was fake. It was not a photo of India but of Japan and that too of 2009. Goyal had also tweeted earlier that the government has saved Rs 25,900 crore in the supply of coal. The photo tweeted was also fake.

Chhattisgarh’s PWD Minister Rajesh Murat also shared a photo of a bridge to highlight the success of his government. His tweet got 2000 likes but later it came to light that this photo is not of Chhattisgarh but from Vietnam.

Our Karnataka RSS and BJP leaders are also no less in spreading such fake news. Pratap Simha, an MP from Karnataka, shared a report saying that this has been published in Times of India. The headline was that a Hindu girl was stabbed and murdered by a Muslim. Pratap Simha, who used to teach morality to the world, didn’t even try to know the truth behind the story. None of the newspapers published such news, rather the headline was placed through photoshop and it was given a communal angle. The name of Times of India was used. When there was a furore over this, the MP deleted the fake news and but didn’t say apologise for it. He was also not sorry for spreading the communal lie.

As written by my friend, Vasu, in this column, even I have shared a fake news without thinking. Lalu Yadav shared a photo after photoshopping it from the Patna rally on Sunday. After some time, Shashidhar, another friend of mine, told me that this photo is fake. I instantly removed it and even said sorry for it. I even shared the fake as well as the original photo after that. There was no intent to provoke communal reaction. I only wanted to give the message that people are coming together against fascists. Finally, I salute those who expose fake news. I wish there were more of them.