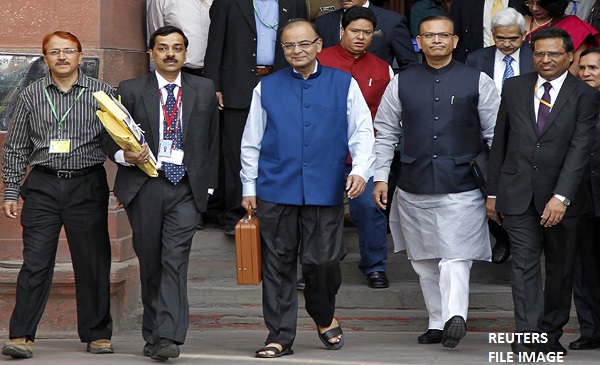 India's Finance Minister Arun Jaitley (C) leaves his office to present the 2015/16 federal budget in New Delhi February 28, 2015. Finance Minister Arun Jaitley will rise to announce Budget proposals on February 1 at 11 am. This is going to be the present government's final full budget before the elections in 2019. A lot of expectations have been built in on whether it is going to be a populist one by announcing various sops for the middle class and rural India or will revenue constraints force the government to stick to financial consolidation. Prime Minister Narendra Modi has already hinted in a recent television interview that the budget is not going to be populist in nature. We bring you a list of things you should know before hearing the budget speech and the meaning of the key terms associated with the annual budget exercise. 1) What is the union budget? Union budget is an annual statement of the estimated expenditure and income in the coming financial year presented in the parliament by the finance minister. In other words, it’s a statement of how much and how the government intends to raise and spend money in the next financial year (FY). It will list the tax plans for the next year. The constitutional provision for the budget is listed in Article 112 and is referred to as the Annual Financial Statement. It also includes the budget allocated to each ministry in the current financial year, how much it has already spent and how much more funds they require. Before 2017, the railway budget was presented separately from the general budget. The Narendra Modi led BJP government decided to merge the rail budget with the general budget since FY 2017-18 and put an end to the 92-year old practice. 2) Why was the date for Budget advanced to February 1? Since 2017, the budget has been presented on February 1. Before that the budget was presented on February 28 of every year. The advancement of the budget to February 1 was intended to make funds available from begining of the financial year (April 1 - March 31). When the budget presentation used to happen on February 28, the Lok Sabha sanctioned funds for the first two to three months till the full budget was approved. The new schedule will also help the government in applying new tax measures from the begining of the year and thus make use of the tax revenues as per new measures. 3) Why is the budget presented in Lok Sabha? The constitution has vested the power of approving the budget in the hands of chosen representatives of the people, the Lok Sabha. Article 265 and 266 provide that ‘no tax shall be levied or collected except by authority of law’ and ‘no expenditure can be incurred except with the authorisation of the Legislature’, respectively. Thus, Lok Sabha possess the power to approve budgets. Rajya Sabha can only propose amendments which the former may or may not accept. 4) What is the Consolidated Fund of India? It is the central fund from which all expenditures of the government are incurred. The fund comprises of revenues received by the government, loans raised by it and receipts of recoveries of loans granted by it. The government requires the authorisation of the parliament to withdraw amounts from the consolidated fund of India. Apart from the consolidated fund, there are two other government accounts for which the expenditure and receipts are presented in the budget. The contingency fund is the fund allocated for urgent unforeseen expenditure. This fund is at the disposal of the president. The third account is the public account which has funds kept in the trust of the government, but does not belong to the government. This account has money from provident funds, small saving collections and government incomes. This money is to be returned to depositors upon and can be withdrawn without authorization of the parliament. 5) What is revenue budget and capital budget? Revenue budget consists of revenue receipts and expenditure. Revenue receipts are through tax collection, duties, interests and dividend on government investments. This revenue is used for running the government, subsidies, grants and aid, and repayment of interests of debts. Those government expenditures that do not create assets fall under revenue expenditure. Capital budget consists of capital receipts and expenditure. Capital receipts consist of loans raised from public, foreign governments and bodies, borrowing from Reserve Bank of India, disinvestment and recoveries of loans. Capital expenditure is expenditure on assets such as lands, buildings, machinery and equipment. 6) What are budget estimates, revised estimates and actuals? Budget estimate refers to the budget allocated for the next financial year. The budget estimate that Jaitley shall be presenting on February 01, 2018 shall be for April 2018 to March 2019. Revised estimate refers to the revised budget estimates of the on-going financial year. This shall include the funds allocated to different ministries in the course of the year in addition to the budget estimate . Jaitley shall present the revised estimates of FY 2017-18 in this budget session. Actual expenditure refers to the exact expenditure incurred in a financial year. Since it can be calculated only at the end of the financial year, the actual expenditure presented in a budget session shall be that of the previous year. Jaitley shall be presenting the actual expenditure of FY 2016-17 in this budget session. 7) What is a fiscal deficit? Fiscal deficit is the excess in expenditure over the total non-borrowed receipts of the government in a financial year. It is usually funded by borrowing from the public. Jaitley had pegged the fiscal deficit for FY 18 at 3.2% of GDP. He had met the target of 3.5% set for FY 17 and 3.9% of FY 16.

If the government borrows more, there is pressure on the money supply or liquidity in the banking system. Banks have to give priority to the government’s borrowing needs over attractive loans they can offer to businesses or individuals. Businesses have to look for borrowing through other means like a public offering of debt or overseas loans instead of local banks.

8) What is the process of passing a budget in the Lok Sabha? The government needs to get the approval of the parliament to withdraw funds from the consolidated fund. This is done through the demands for grants and appropriation bills. The government submits the annual finance statement along with demands for grants of each ministry to the Lok Sabha. Demands for grants details the estimated expenditure of different ministries. After the budget is presented in the Lok Sabha, general discussions are held following which the house is adjourned for a fixed period. During this period the demand of grants is considered by the standing committee which comprises of 30 members of Lok Sabha and 25 from Rajya Sabha. They submit a report to the parliament. Following this, detailed discussions and voting are held on these demands in the parliament. This is followed by the introduction of Appropriation bill and voting is held to authorize the government to release funds from the consolidated fund. 9) What is the finance bill?   After the presentation of the budget, the finance minister introduces the finance bill. The bill details the imposition, abolition, alteration and regulation of taxes proposed in the budget. 10) What is personal income tax and corporate tax? The former is the direct tax levied on the income of an individual and the latter on companies. In the previous budget, Jaitley proposed to reduce PIT rate to 5% from 10% for the income bracket of Rs 2.5-5 lakh. Personal income tax rates for FY 2017-18 are as follows:

He also proposed to reduce tax rate to 25% from 30% for companies with an annual turnover of up to Rs 50 crore. 11) What shall be the effect of GST on indirect taxes? This is going to be the first budget ever since the biggest tax reform seen by Independent India which was introduced on July 1, 2017 - The Goods & Services Tax or the GST. Since GST subsumed several indirect taxes like excise duty, service tax, VAT, the Part B of Finance Minister Arun Jaitley's speech is likely to be quite short. At best, you may see the speech announcing changes on custom duties and excise duties on petroleum products that have been kept out of the GST. SOURCES:  Union Budget 2017-18 Budget in Parliament Know Your Budget, Ministry of Finance How To Read The Union Budget, PRS The Union Budget - A Primer, PRS Ecowrap, SBI
Arun Jaitley BJP Budget 2018 featured Finance Bill fiscal deficit GST Lok Sabha Narendra Modi Parliament Tax
📧 Subscribe to our newsletter here. 📣You can also follow us on Twitter, Facebook, Instagram, Youtube, Linkedin and Google News