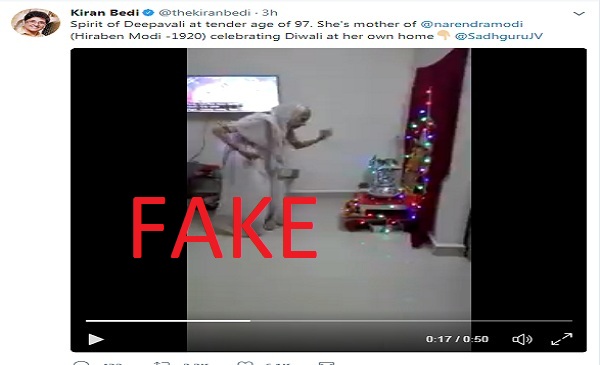 A video of an old woman playing Garba is being shared as a video of Prime Minister Narendra Modi's 97-year old mother Heeraben Modi celebrating Diwali at her home. Twitter users were quick to call out the video shared by Kiran Bedi,�Lieutenant Governor of Puducherry, who later on tweeted that it was a case of mistaken identity.

Spirit of Deepavali at tender age of 97. She's mother of @narendramodi (Hiraben Modi -1920) celebrating Diwali at her own home??@SadhguruJV pic.twitter.com/HBXAzNXomC

While we were not able to find much about the identity or age of the woman in the video, the video itself has existed since September on YouTube. The song playing in the background is one associated with the festival of Navaratri and not Diwali. Another YouTube video claims the woman is a 100 years old though there is no evidence to support the claim. None of the video's previous descriptions refer to the woman as Heeraben Modi nor does the woman bear any resemblance to the prime minister's mother. [caption id="attachment_36503" align="aligncenter" width="800"]

screenshot of an image search result for Hiraba Modi[/caption] Bedi later tweeted out a clarification.

Am informed it's mistaken identity @SadhguruJV. But salute to the mother with so much vigour. I hope i can be like her if/ when I am 96..! https://t.co/5llHN40tg8