A scene from a very popular Malayalam Television serial was shared by certain Facebook users only to become a laughing stock on social media.

The post which targets the communist government of Kerala includes an image of a woman police officer and a man bidding goodbye with deep sadness and the accompanied text says,

What the commie government is doing there??

Is there no security even for an IPS officer?? 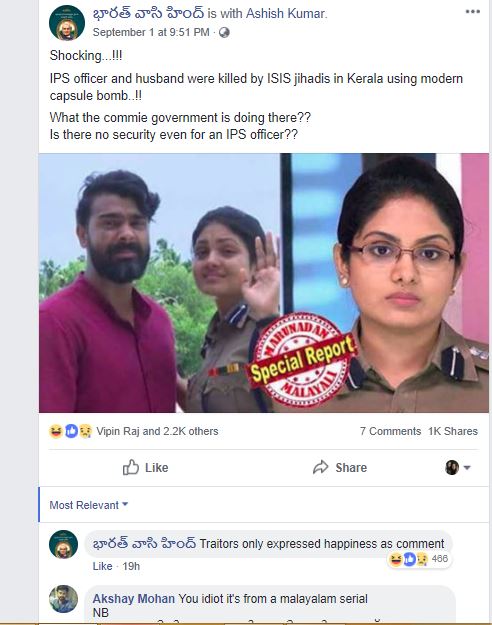 The above post is from a Facebook user భారత్ వాసి హింద్ (In Telugu) which translates to 'Bharat Vasi'. The post got more than 2K reactions and 1K shares, at the time of writing this story. Many users who shared the post have deleted it after realising the gaffe. The image is a still from the tragic climax of the serial 'Parasparam' aired on Asianet. The lead actors who played the roles of IPS officer Deepthi and her husband Sooraj - are seen bidding good bye to their family before the explosion of the capsule bomb they had swallowed at gun point. They decided to sacrifice their lives by getting on to a boat and explode in the middle of a lake to avoid casualties.

The post has received some hilarious comments and reactions. It has left many in splits that they have shared it further to expose the gaffe.

A look at the post shows that out of the 2.3K reactions, more than 2K are 'laughing' at it. Irritated by the reactions, the owner of post భారత్ వాసి హింద్ commented, "Traitors only expressed happiness as comment". This again attracted more 'laughing/Haha' emojis. Below is another user who has shared the post with a comment pointing out that the still is from the serial ' Parasparam'.

😂" which translates to, "The Chief Minister should resign".

The origin of the image

BOOM traced the origin of the image to a Facebook post by 'Marunadan Malayali' from the timestamp on the image. Marunadan Malayalee is an online news portal. On August 31, the website had reported that 'Parasparam' - the 1524 episode long serial - had come to an end with a tragic climax. The article in Malayalam describes the whole episode for its readers. The serial was aired for more than four years and had gained a lot of popularity among the Malayalam audience.

Claim :   IPS Officer And Husband Were Killed By ISIS Jihadis In Kerala Using Modern Capsule Bomb
Claimed By :  Facebook User
Fact Check :  True
Asianet Communist featured IPS Officer ISIS Jihadi Kerala Malayalam Parasparam soap opera Social Media TV show
If you value our work, we have an ask: Our journalists work with TruthSeekers like you to publish fact-checks, explainers, ground reports and media literacy content. Much of this work involves using investigative methods and forensic tools. Our work is resource-intensive, and we rely on our readers to fund our work. Support us so we can continue our work of decluttering the information landscape. BECOME A MEMBER
📧 Subscribe to our newsletter here. 📣You can also follow us on Twitter, Facebook, Instagram, Youtube, Linkedin and Google News 📝Stay updated with all our latest fact check stories.