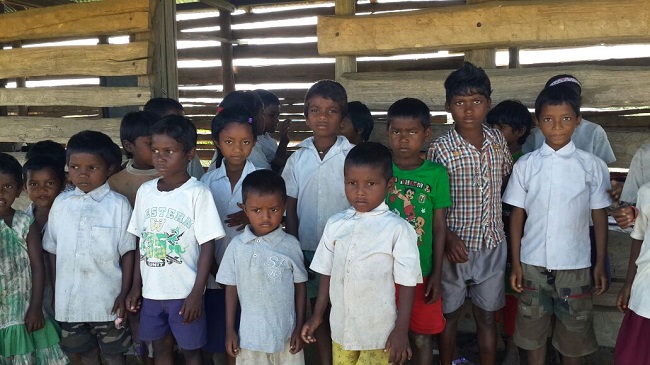 Guwahati: On November 7, 2007, Laxmi Orang, a 16-year-old girl from the tea workers community in Assam, was stripped and thrashed by hoodlums in full public view on a busy road in Beltola, Guwahati. She was one among hundreds protesting and pressing for Scheduled Tribe (ST) status for her community.

Nine years on, the ST status continues to elude Laxmi and more than 60 lakh tea garden workers in Assam despite a history of protests.

A month after the Beltola incident, the All Adivasi National Liberation Army, an Adivasi militant group, triggered a blast in the New Delhi-bound Rajdhani Express near Sungajan Railway station in Assam's Golaghat district. Five passengers were killed and numerous injured.

In recent days there have been a spate of protests by Koch Rajbongshi, Tai Ahom, Moran, Motok, Chutia and Adivasi communities. These came after the October 15 deadline for a committee headed by Home Ministry official Mahesh Kumar Singla to look into their demand and submit a report passed.

The Singla Committee, set up by the central government on March 1, 2016, was to submit its report in three months, later extended until October 15. The committee consulted representatives of the 6 communities seeking inclusion in the ST list as well as those who were opposed to the demand.

Tea garden communities in Assam are known as Adivasis but are yet to be accorded ST status, so the demand for reservation in jobs is similar to what was given to their forefathers in the states of Jharkhand and Madhya Pradesh.

“Our forefathers were brought from Chotanagpur plateau in central India by the British for tea cultivation in Assam in the early 19th century. They worked like bonded labourers and brought global fame to Assam tea," said Stephen Lakra, president of Adivasi Students’ Association of Assam.

"For all that, till today we have not been accorded ST status. We have mostly been protesting peacefully, but some of us formed armed groups. Nothing seems to move the Centre. Our case for ST status is stronger compared to five other communities as we are already tribal in other states,” he said.

Last month, an umbrella body of Adivasi organisations, including six militant groups who laid down arms in 2012, submitted a memorandum to Prime Minister Narendra Modi reiterating their demand for ST status.

How Big A Group Are They?

Tea garden communities constitute about 18 to 20% of the state’s total population, according to the 2011 Population Census. They are spread over the districts of Western Assam, Morigaon, Nagaon, Sonitpur and Darrang in central Assam, Golaghat, Jorhat, Sibsagar, Dibrugarh and Tinsukia in upper Assam, North Cachar and Karbi Anglong districts in Barak valley.

The labour intensive tea industry of Assam is totally dependent on the workforce of the tea garden community comprising large tribes such as Munda, Santhal, Kurukh, Gonds, Bhumji.

In Assam, the tale of the Adivasis is one of despair and hopelessness. The state produces more than half of the country’s one billion kilograms of tea every year.

Tea sells for an average of Rs. 140 a kilogram at an auction in Assam. Tea garden workers in the main estates of Brahmaputra valley, are paid a basic daily wage of Rs. 94, much below the daily minimum wage of Rs. 350 for semi-skilled workers fixed by the government in 2015.

Low wage and no land allotment continue to dog Assam tea garden workers. But those living outside are grappling with a lack of jobs. Low wages are resulting in poor malnutrition in children, and anemia among women.

Long neglect of their demands and no improvement to their socio-economic condition are forcing many to fall prey to child trafficking. Scores of young women and children have been trafficked out of the state with the promise of work and education.

Many end up in prostitution.

Bachpan Bachao Andalon, an NGO working against child trafficking and child labour, has reported that in Assam’s Lakhimpur district alone, nearly 150 girls between 12-18 years of age have gone missing during 2013-2015.

The NGO has kicked off a campaign against child trafficking and child labour called Mukti Caravan.

Official data show a total of 9,500 children have gone missing from Lakhimpur, Sonitpur, Golaghat, Udalguri, Dibrugarh, Baksa districts --- most of them belonging to tea garden workers --- between 2007 and June 2014.

Police and NGOs have rescued only 3,840 of the 9,500 from the clutches of traffickers. “Most of the trafficking cases have been reported from tea garden areas of the state. Traffickers keep changing their methods and routes of operation. So it is difficult to trace them and rescue the victims. In many cases, parents themselves sell their children to traffickers” said Rakesh Senger, director (Victim Assistance) of Bachapan Bachao Andolon.

As “Adivasis” working in tea gardens do not enjoy land rights inside the gardens, many are moving out and settling in "tea forests". But because they are not designated ST, they do not enjoy rights over forests, and are hence subjected to eviction and harassment.

Recently, more than 1,000 such families living in Ripu-Chirang reserve forests in Kokrajhar and Chirang district (bordering Bhutan) were served eviction notices by the forest department of Bodoland Territorial Council, an autonomous council set up by the Centre in 2003 to end violence by Bodo organisations.

With the forest department refusing to accept their demand for rehabilitation, these poor families face the immediate threat of eviction from the forests.

“They settled in forests out of compulsion. Their houses were burnt down by Bodo miscreants during 1996 and 1998 ethnic clashes. They lived next to highways and in relief camps for years. They do not go back to their native homes out of fear. The government also did not rehabilitate them. So, they had no option but to settle in forests,” said Lakra.

Since 1998, the Adivasi settlers have become soft targets of militant groups. The militants suspect them to be informers of the security forces. More than 300 Adivasis has been killed in attacks by militant groups since 1998.

There was no official death toll of Adivais in the 1996 Bodo-Adivasi ethnic clashes though thousands were displaced and their lands taken over by miscreants.

On December 23, 2014, 67 Adivasi settlers were gunned down by a faction of the NDFB in Kokrajhar and Sonitpur districts. Thousands were displaced following the massacre.

The mass killings in 1996 in Kokrajhar district prompted some Adivasi youths to take up arms. They formed the Birsa Commando Force (BCF), a militant group to “avenge the killings” and fight for Scheduled Tribe status for the community.

Five more such groups cropped up gradually. “Till then the only arms we carried were bows and arrows to hunt. The killings and arson in 1996 forced us to take up arms. The government did not protect us from Bodo militants, so on June 30, 1996 we formed the BCF, procured weapons with money collected from our community, trained our youth and extorted money,” said Rajen Hembrom, an ex-BCF “commander”.

Hembrom and more than 500 members of five other Adivasi militant groups—Adivasi Cobra Military of Assam, Adivasi People’s Army, Santhal Tiger Force and All Assam National Liberation Army --- laid down arms in 2012 after then union home minister P. Chidambaram promised them a solution “through dialogues.”

“Nothing happened. We feel duped today. Half of our boys are paid only Rs. 3,000 per month while the issue of ST has been ignored. Most of the members are getting frustrated and some are again resorting to illegal acts,” said Bising Munda, “former commander-in-chief” of BCF.

Adivasis in Assam have been a vote bank of the Congress Party for 15 years in a row till May of this year when the BJP and its allies wrested power in the state.

This happened because most of the leaders of the tea garden communities felt that the Congress had failed to fulfill its repeated promise to give ST status to them despite being in power both in the state and at the Centre.

"Adivasis are one of the most marginalised communities of Assam, at the bottom of each and every development indicator. The government has been using them as a massive herd of voters," social scientist and political analyst Abdul Kalam Azad said.

"Displaced by violence, they have been living in camps and settlements for decades without government support and rehabilitation. If this continues, Adivasi outfits will have no option but to resort to violence again.”

Syeda Ambia Zahan is a Guwahati based independent journalist and a member of 101Reporters.com, a pan-India network of grassroots reporters.

Abdul Kalam Azad Adivasi outfits adivasis Assam Congress Party Kokrajhar marginalised communities tea garden communities tea workers
If you value our work, we have an ask: Our journalists work with TruthSeekers like you to publish fact-checks, explainers, ground reports and media literacy content. Much of this work involves using investigative methods and forensic tools. Our work is resource-intensive, and we rely on our readers to fund our work. Support us so we can continue our work of decluttering the information landscape. BECOME A MEMBER
📧 Subscribe to our newsletter here. 📣You can also follow us on Twitter, Facebook, Instagram, Youtube, Linkedin and Google News