The PTI story that was carried by The Times Of India claimed that the approval of the project will reduce the time to cross the Zojilla Pass Tunnel. 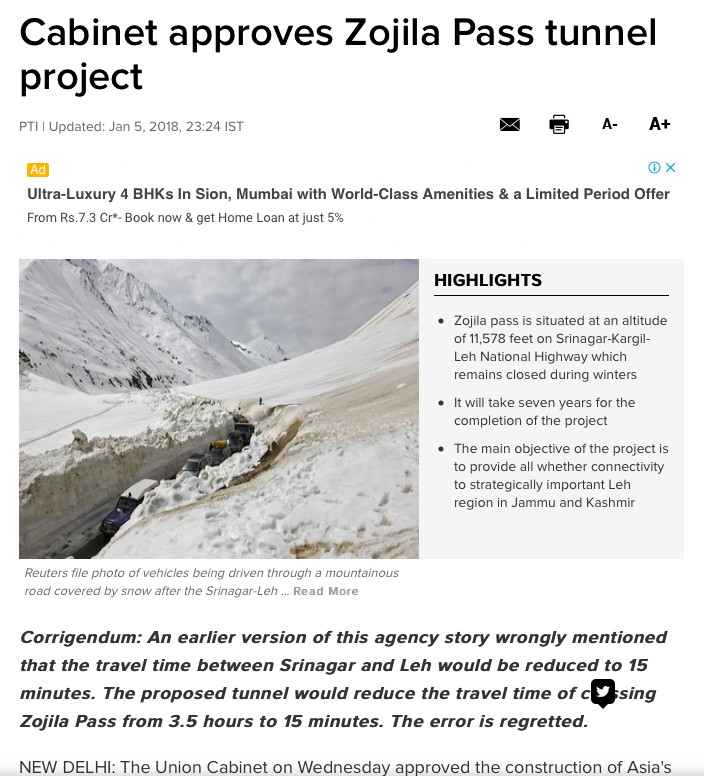 Many Twitteratis pointed out the glaring error to the Member of Parliament and even clarified that it is the time taken to cross the tunnel and not cross the distance between Srinagar and Leh.

You may want to correct your tweet. It can’t be Srinagar to Leh in 15 min. It is the time that will be taken to cross the tunnel. Srinagar-Leh will most likely to take 18-20 hours. The original headline by ToI is wrong.

She tweets via the NMapp. Will take time to 'Graduate' in the BJP school to tweet directly on twitter 😂

You r a minister.

You claim to be from Yale

Yet you can't even calculate a simple thing as speed.

Have u lost it?

The construction of this tunnel will provide all weather connectivity between Srinagar, Kargil and Leh and will bring about all round economic and socio-cultural integration of these regions, said a press release issued by the Press Information Bureau on Jan 3, 2018. The total capital cost of the project is Rs 6808.69 crore.

While Smriti Irani is yet to delete her tweet, the combative cabinet minister has been in the news in the past calling out news agencies for deleting tweets. In August last year, Irani's angry tweet got news agency Press Trust Of India to apologise and delete an image posted on Twitter. PTI had posted an image of party workers at Bodhgaya with masks of Prime Minister Narendra Modi and Bihar Chief Minister Nitish Kumar celebrating Friendship Day as part of their newly formed alliance in the state. (Read here)

Zojila Tunnel: The Story So Far

This project has been in the works for several years with the first approval for the tunnel given by the UPA government on October 17, 2013. Thereafter the project went through several tendering process where the response were found to be poor. After receiving single bidders four times, the project was awarded to IRB Infrastructure Developers on single tender basis in December 2015 for 10,050 cr. But this contract was cancelled as Digvijaya Singh of the Congress alleged that the guidelines set by the Central Vigilance Commission were violated while awarding the contract to IRB.

On January 12, 2016, The ministry of Roads, Transport & Highways headed by Nitin Gadkari refuted the allegation and said the Zojila tunnel tendering process was as per procedure (Read here)

On calling for fresh bids, Infrastructure major IL&FS Transportation emerged as the lowest bidder for this crucial project. The project will now be be implemented by Ministry of Road Transport & Highways through National Highways & Infrastructure Development Corporation Limited (NHIDCL) under the EPC mode where the government bears the entire cost of the construction and pays the contractor.

The project is likely to take seven years to complete.

BJP featured Jammu and Kashmir Leh Smriti Irani Srinagar Times of India Zojilla Pass Tunnel
If you value our work, we have an ask: Our journalists work with TruthSeekers like you to publish fact-checks, explainers, ground reports and media literacy content. Much of this work involves using investigative methods and forensic tools. Our work is resource-intensive, and we rely on our readers to fund our work. Support us so we can continue our work of decluttering the information landscape. BECOME A MEMBER
📧 Subscribe to our newsletter here. 📣You can also follow us on Twitter, Facebook, Instagram, Youtube, Linkedin and Google News 📝Stay updated with all our latest fact check stories.