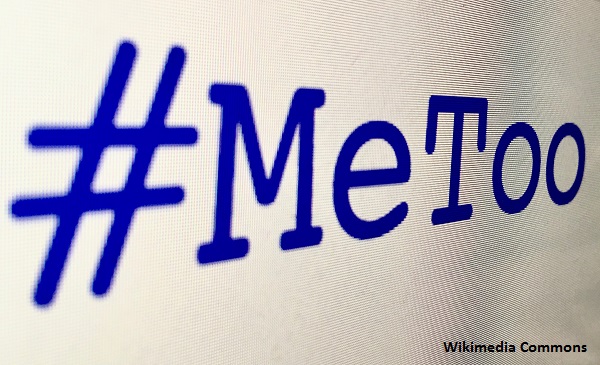 Actor Tanushree Dutta's account of sexual harassment by actor Nana Patekar ten years back has opened a flood gate of #MeToo accounts from the media and film industry. Several journalists and actors are taking forward the #MeToo campaign in India and has put at spot several bigwigs including Minister M J Akbar, director Vikas Bahl and comedians Gursimram Khamba and Utsav Chakravarty.

In the light of the recent accounts of sexual harassment at workplace, BOOM looks at the purview of the law in terms of addressing the issue.

What are the legal provisions to address sexual harassment at workplace in India?

Prior to this, it was the Vishaka Guidelines formulated in 1997 that dealt with sexual harassment at workplace. The POSH 2013 Act was derived from the Vishakha Guidelines and in fact takes it a step further by broadening the scope of the law.

The legally binding guidelines were issued in a landmark judgement of the Vishaka vs. State of Rajasthan. The case was based on a PIL filed by Vishaka and other women groups against the gang rape of Bhanwari Devi who was working with the state of Rajasthan to prevent child marriages. Devi attracted strong resentment for her work. Though she informed the authorities about this, no action was taken. Later she was raped as revenge for stopping the marriage of a 1-year old in the village.

Before 1997, there was no legal provision to deal specifically with sexual harassment at workplace. But cases of sexual harassment were covered under Section 354 of Indian Penal Code (IPC) which covers 'Assault or criminal force to woman with intent to outrage her modesty'. The maximum punishment was up to 2 years. The criminal amendment act 2013 changed the punishment to 1 to 5 years and is liable to a fine.

What is considered sexual harassment? What kind of conduct fall under the purview of the POSH Act?

The definition brings under purview, both overt and covert sexual harassment faced by female co-workers.

(whether directly or by implication) namely:—

(ii) a demand or request for sexual favours; or

(v) any other unwelcome physical, verbal or non-verbal conduct of sexual nature;

The Act recognizes that sexual harassment can happen in a 'matrix of power'. This means that it addresses harassment by any person who are in a position of power in the workplace.

Some examples listed in the Handbook On Sexual Harassment of Women at Workplace by the Ministry of Child and Women Development are as below.

How does the Act define 'workplace'?

The Act has a broad definition of workplace and covers both organised and un-organized sectors and it goes beyond the traditional concept of 'office' within the four walls.

The Act defines workplaces as "Any place visited by the employee arising out of or during the course of employment, including transportation provided by the employer for undertaking such a journey.”

For example, for a house-maid the workplace will be the house she is employed at, or if an employee is travelling on duty, the vehicle becomes the workplace.

Who is protected under the Act?

Any woman associated with a workplace - working or visiting - is protected under the Act. It includes employees who are regular, on contract basis, volunteers, trainee and even women who are not employed with the organization but visiting the workplace.

Screenshot from WCD's Handbook on Sexual Harassment at Workplace

What is the role of the employer?

The employer is responsible to create a safe and sound environment for women at the workplace by preventing and redressing any such incidents. The employers is supposed to organize awareness programmes on sexual harassment and the Act.

In case of organizations with less than 10 employees, the complaints are directed to the Local Complaints Committee (LCC) set up at the district level. LCC can be approached by employees from the unorganized sector and also when the complaint is not settled by the ICC or if the complaint is against the employer itself.

How is a case taken up? Who can file a complaint?

The aggrieved woman is supposed to file a written complaint with the ICC / LCC within three months of the incident.

However, if the woman is physically or mentally incapacitated, anyone who is aware of the incident of sexual harassment can complain to Internal complains Committee (ICC), in the former's case - with the consent of the aggrieved. It includes relatives of the victim or a friend or a co-worker. 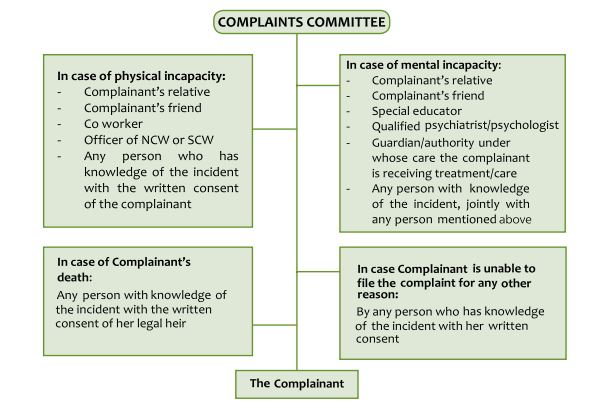 Screenshot from WCD's Handbook on Sexual Harassment at Workplace

How does the Act mandate the ICC / LCC to inquire the complaint?

Upon receiving the complaint, the ICC is supposed to send a notice to the respondent within 7 days and complete the inquiry within a period of 90 days. The report has to be submitted to the Employer or the District Officer within 10 days. The Employer/DO needs to act upon the recommendations of the committee within 60 days.

While the inquiry is pending, the complainant has the option for a transfer or leave for up to 3 months or seek a transfer of the respondent.

Can sexual harassment at workplace be dealt with criminal proceedings?

It is the woman's choice whether to go for a criminal proceeding (file an FIR) or take up a civil case (approach ICC) or to do both. If the complainant opts for criminal proceedings, the Act mandates the employer to support her. In case a woman is filing a criminal complaint against an outsider, her current employer is supposed to file a case on her behalf.

Section 354 as mentioned above is applied when physical contact or force is used to outrage a woman's modesty. Currently, it attracts imprisonment up to 5 years.

Criminal law amendment 2013 inserted section 354(A) IPC, which addresses physical contact but also any advances such as:

Section 509 of IPC can be applied for a 'word, gesture or act intended to insult the modesty of a woman'. It attracts a punishment of up to 1-year of imprisonment.

What if an incident is older than 3 months? What are the options in front of a woman?

A woman can approach the ICC for cases which are three months old. But the ICC can extend the time up to six months based on its discretion. BOOM spoke to Dr Anagha Sarpotdar who is a consultant and external member (Internal Committee) with several organizations. She said that the law is guided by the principles of nature justice and in many cases sexual harassment is not reported due to the stigma associated, the retaliation and the difficulty in reporting it. Thus in general, committees are open to inquiring cases which are older than 3 months.

BOOM spoke to Former civil servant and practicing lawyer Abha Singh to know if an FIR can be filed in such cases. Singh pointed out that any crime which has a punishment above 3 years has no time bar in terms of reporting.

She specified, "In case of rape, even if it has happened 20 years back, an FIR has to be registered".

Supreme court lawyer Vrinda Grover pointed out in her article in The Indian Express how the non-filing of the complaint cannot be held against a woman when there was no redressal mechanism for sexual harassment at workplace before 1997.

Both Singh and Sarpotdar made the observation that the #MeToo accounts were not necessarily to take criminal action, but to speak out about the sexual harassment they have faced.