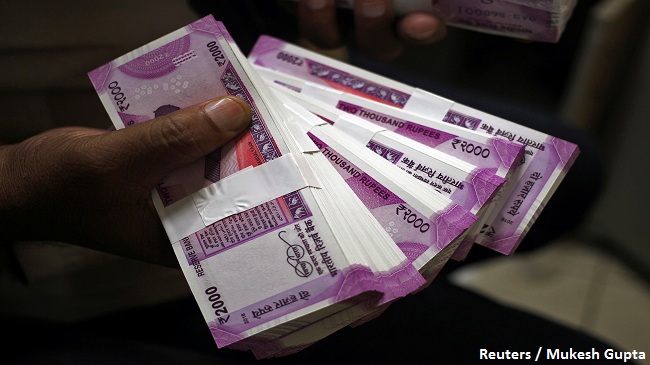 A cashier displays the new 2000 Indian rupee banknotes inside a bank in Jammu, November 15, 2016. REUTERS/Mukesh Gupta/File photo TPX IMAGES OF THE DAY - RTX2TY3C

The design and blueprint for India's Rs 2,000 currency note has been in the works for more than a year, much before Prime Minister Narendra Modi’s announcement on demonetising Rs 500 and Rs 1,000 rupee notes on November 8, 2016, BOOM has reliably learnt. The Rs 2,000 notes started appearing in ATMs on November 10, 2016.

Moreover, printing of the Rs 2,000 currency note had begun before the announcement on November 08 and it was understood that the Prime Minister would unveil the Rs 2,000 note on October 30, 2016, the day of Diwali, India’s festival of lights.

More interestingly, the move to print Rs 2,000 note was almost entirely linked to reasons like inflation and the fact that high denomination currencies were seen as losing their value, BOOM has learnt.

Bankers BOOM spoke to also confirmed that Rs 2,000 notes had reached some of them before November 8, though they did not link the move to demonetisation at the time.

The Rs 2,000 note series is signed off by Governor Urijit Patel but the move to introduce them, including the groundwork for blueprint and designs, began during the tenure of former Governor Dr Raghuram Rajan.

The fact that the Rs 2,000 note was in play before the announcement of demonetisation runs contrary to the theory that the government and the RBI bungled the rollout of demonetisation by introducing a new high, denomination note which did little to assuage the problems faced by hundreds of millions of Indians as they lined up outside banks and ATMs.

It now appears that the Rs 2,000 note would have made its debut in the last few months of 2016 or early 2017 whether or not the November 08 announcement had happened.

If demonetisation had not been announced, then the introduction of the Rs 2,000 note would have been viewed differently and perhaps more aligned to the original intention, which was to create an inflation hedge.

As it turned out, it created a big problem for the common man because change was difficult to procure.

Newspapers reported last week that the RBI, during Dr Rajan’s tenure had suggested introducing even Rs 5,000 and Rs 10,000 notes following the view that the value of the Rs 1,000 note was being eroded by inflation.

Information provided by the RBI to the Public Accounts Committee said the central bank had recommended this in October 2014.

Some 18 months later, in May 2016, the Government informed the RBI, according to reports, about its in-principle decision to introduce a new series of Rs 2,000 notes.

It was evidently not expected that these moves would mesh with demonetisation.

In retrospect, however, the existence of the Rs 2,000 notes could have been one of the triggers for the November 8 announcement.