Before taking a shot at a Jamia protester, the shooter made some chilling posts on Facebook, to inform his 3000 plus friends and followers of the attack. Referring to the ongoing protests at Shaheen Bagh, he wrote, "Shaheen Bagh.. Game Over", and posted a series of live videos from the scene of attack.

While he is now in police custody, the injured - who took a bullet in his hand - is in stable condition and being treated at the Holy Family Hospital in Delhi.

Accessing the shooter's online profile, BOOM found that the act was planned well in advance, with multiple posts and Facebook lives hinting at imminent violence.

His posts also indicate that the attack was meant as an act of revenge for the death of Chandan Gupta, who was shot dead in January 2018, during a "Tiranga Yatra" in Uttar Pradesh's Kasgunj, which ended in a communal clash.

A History Of Violence

The shooter - a resident of Jewar area of Gutam Buddha Nagar District in Uttar Pradesh - has a radicalised past, and his social media accounts are a dead giveaway. As we probed into his Facebook and Instagram accounts, we found a youth with a penchant for violence and a fascination with weapons.

ANI initially first described him as a 19-year old, citing Delhi Police sources. However, in a change of turn the CBSE marksheet of the gunman appeared, according to which he was just shy of turning 18. 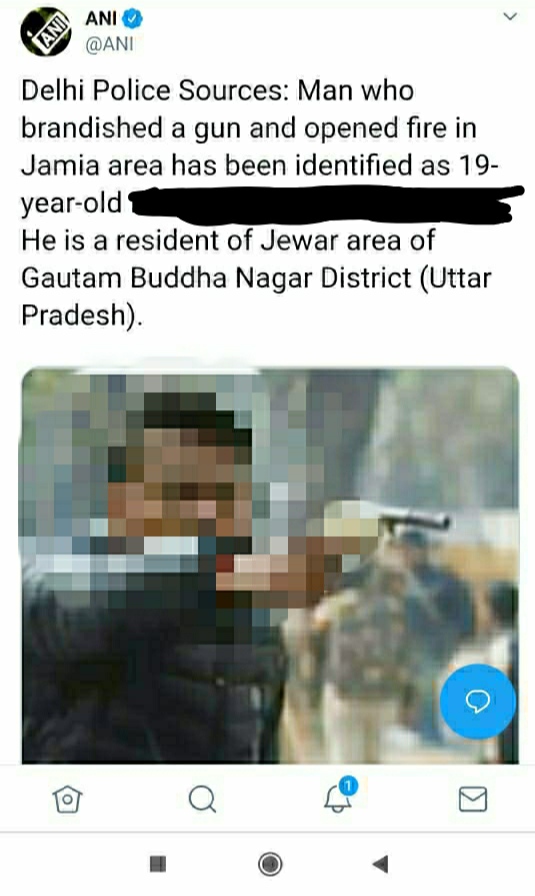 Delhi: CBSE marksheet of the allegedly minor gunman who brandished a gun and opened fire in Jamia area, earlier today. One student was injured in the incident. pic.twitter.com/3p6Pgbsl7P

NDTV anchor Sreenivasan Jain posted a video on Twitter which shows the shooter take a shot right in front of Delhi Police, after which the cops come and whisk him away. As he is put in the car, he shouts out his name.

The Facebook search was simple - the profile popped up immediately. The last few posts caught our eye - they were Facebook lives posted right before the act was committed. The person in the Facebook video had stark similarities with the person seen in the footage posted by Jain. We had a match!

Upon probing further, we came across posts hinting at an imminent act of violence, with some posts indicating that he was on a suicide mission, while some others indicated hostility towards protesters at Shaheen Bagh. One of the shooter's posts read: "Shaheen Bagh, end of game!"

He was also found posting the same thing on several Facebook groups, to inform them of his intention to attack. 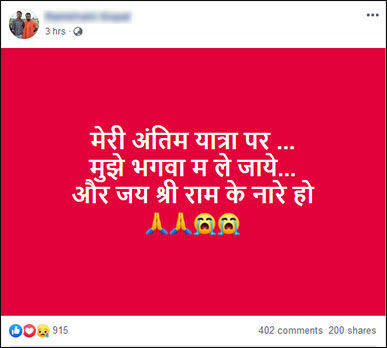 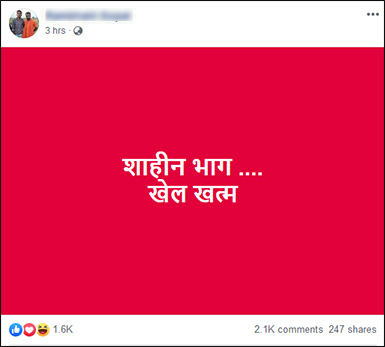 We also found posts where he clarifies on his motive for carrying out the act - he was exacting revenge for the murder of Chandan Gupta - a 23 year old who died during a communal clash in UP's Kasgunj, two years ago.

Just before he shot at the protesting crowd at Jamia, he made a post on Facebook saying, "Brother Chandan, this revenge is for you." 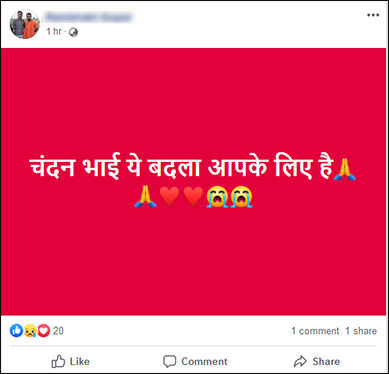 Upon searching further, BOOM came across Sharma's Instagram profile, which gave away his fascination with guns and violence. His Facebook cover photo also showed him kissing a sword. 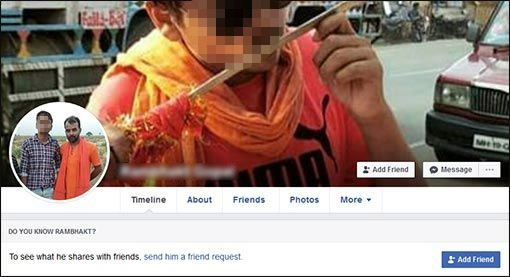 Shortly after, the Facebook profile disappeared, followed by another profile appearing to have been used by the perpetrator.

On this account, his public posts can only be seen until May 2018. Upon looking through his older photos, we observed that he also showed interest in regular teenager things like wrestling and cricket.

More recently, he had posted photos of him attending what he described as Bajrang Dal rallies and meetings. BOOM was not independently able to verify if the perpetrator was a Bajrang Dal member.

However, in his now deleted profile picture, he was seen standing with Bajrang Dal member Deepak Sharma. 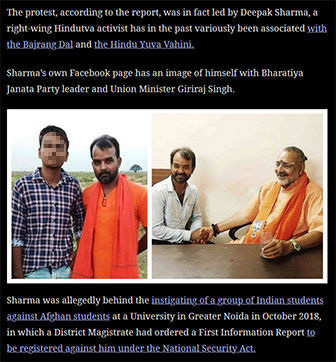 He had also posted several pictures of Deepak Sharma on his Instagram profile, referring to him as "Bhai" or brother.

The article has been updated.