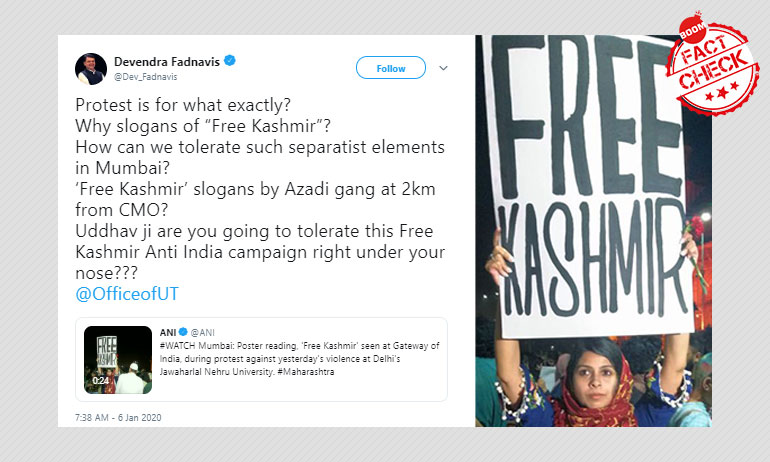 A picture of a Mumbai girl holding a 'Free Kashmir' placard at the Occupy Gateway protests held at Gateway of India, on Monday, January 6 2020, for opposing the brutal attack on Jawaharlal Nehru University (JNU) students has landed her in the midst of a political storm. Mehak Mirza Prabhu was interviewed and pictured by wire agency ANI that was further tweeted by Maharashtra's ex-chief Minister Devendra Fadnavis.

Prabhu eventually uploaded a clarification on all her social media channels. She was later booked under section 153b after an FIR was filed against her for speaking against national integrity.

Fadnavis attacked the Uddhav Thackeray led government for allowing 'separatist elements' to protest in Mumbai a mere 2kms from the Chief Minister's Office. He also called it a 'Free Kashmir Anti India' campaign.

Protest is for what exactly?
Why slogans of "Free Kashmir"?
How can we tolerate such separatist elements in Mumbai?
'Free Kashmir' slogans by Azadi gang at 2km from CMO?
Uddhav ji are you going to tolerate this Free Kashmir Anti India campaign right under your nose???@OfficeofUT https://t.co/zkWRjxuTqA

Other staunch politicians and BJP supporting Twitter celebrities soon followed by either attacking the girl or attacking the Thackeray government. All the users felt that the girl was cultivating anti-national sentiments and was asking for the removal of Kashmir from the country.

What Mumbai saw yesterday in the name of protests at Gateway, was shameful and despicable. How can posters of 'Free Kashmir' be accepted in any protest on Indian soul.This is a question we can ask on twitter and Instagram.Did our freedom fighters give their blood to see this day?

According to Mumbai Tak, Prabhu has been booked under section 153b for speaking against the national integrity. This is a bailable offence and the punishment is less than five years.

Shiv Sena leader and Saamna editor, Sanjay Raut when interviewed stated that he read that the person in the video had clarified that free Kashmir meant the lifting of the internet ban in the valley. He further added that the Sena condemns the notion of India being divided and freed from Kashmir.

Sanjay Raut,Shiv Sena: I read in newspaper that those who held 'free Kashmir' banner clarified that they want to be free of restrictions on internet services,mobile services and other issues. Also, if anyone talks of freedom of Kashmir from India then it will not be tolerated. pic.twitter.com/Mi03MkQ3JU

NCP minister Jayant Patil got into a Twitter spat with Fadnavis for justifying Prabhu standing with the poster.

Patil replied to Fadnavis' tweet saying the poster implied freeing Kashmir from discrimination, cellular power and central control. He further expressed his disappointment in Fadnavis misinterpreting the poster. Fadnavis retorted that he did not expect a person of Patil's stature to encourage vote bank politics and stated that Kashmir has already been freed from discrimination.

What a pity!
Now separatist tendencies get a Government advocate.
Jayantrao, this vote bank politics is not expected from you.
Kashmir has already been freed from discrimination and ... (1/2) https://t.co/VRZURYMnZk

Mehak 'Mirza' Prabhu, a Mumbai based writer and story-teller, who was holding the placard released a video on all her social media platforms on Tuesday, January 7. She clarified that she did not make the placard and had found it lying around but resonated with the message on the placard. She further added that her intention behind the placard was to share the idea that Kashmir has been under an internet lockdown and basic constitutional rights should be available to everybody.

Prabhu further stated that she is a Mumbai born and bred Maharashtrian and not Kashmiri. She apologised that for creating an uproar in her naivety and was not expecting a poster to be blown out of proportion.

Her interpretation of Free Kashmir was that she wanted to create awareness about basic human values and the silence surrounding Kashmir.

BOOM reached out to Prabhu on all her social media handles as well as tried contacting her. The story will be updated as soon as we receive a reply.