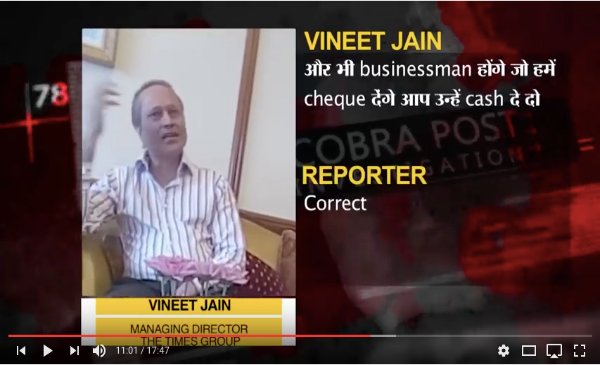 Investigative website Cobrapost has released its second instalment of spy-cam videos that shows its undercover reporter Pushp Sharma negotiating deals with senior management officials and owners of some of the largest media groups in the country to run political and Hindutva propaganda in exchange for crores of rupees. The website had released similar sting videos through a report called Operation-136 on March 27 that had stung three dozen media houses.

Aniruddha Bahal, founder of Cobrapost had said that the sting was named Operation 136 because India is placed at 136th position in the 2017 World Press Freedom Index.

This time, the Cobrapost team stung not just Vineet Jain, owner of the Times group, Kallie Poorie of the India Today group but also senior officials of India's largest digital payments app Paytm revealing some very disturbing conversations around paid news, peddling communal agenda, mass polarization, and acceptance of illegal black currency. In the case of Paytm, the sting video revealed violation of privacy laws of its vast customer base if the claims made are found to be true.

Vineet Jain, managing director of the Times group and executive president Sanjeev Shah could be seen discussing with Pushp Sharma (introduced as Acharya Atal) on ways to accept Rs 500 crore in exchange for running advertorials and events around Bhagvad Gita and Krishna. Sharma makes it clear that they would use surrogate means to further their Hindutva agenda.

Sharma also mentions that the propaganda would include names like Pappu (Rahul Gandhi), Bua (Mayawati) and Babbua (Akhilesh Yadav) in the content in a bid to make fun of them and gain political capital out of it for the party (Read BJP). While Jain is not seen making any firm commitments, he is seen nodding in the video and making brief interventions instead of any firm disagreement on the nature of political content being mixed with religious content.

Jain also reminds Sharma of the reach of the Times group by saying that whether it is the newspapers, Radio, internet, there is no one close to them in the form of distribution and reach.

"Most people don't know that in the internet, we are very big. In the sense, there is Youtube, Facebook and then it is us," says Jain to Sharma.

Sanjeev Shah intervenes to emphasise that on a daily basis, the Times group's reach is more than UK's population( 55 mn) and ranges between 65-70 mn people. Jain adds that even on outdoor advertising, there is no one to match them and both Delhi and Mumbai airports are controlled by them.

That was not just all. When the crucial question around the payment of Rs 500 crore arose, the duo could be seen advising Sharma on how to divert the funds through corporate houses. They advised that one route would be to pay certain corporates in cash who in turn will pass that amount in the form of cheque to buy advertisements from the group.

Interestingly, the only time Jain seems to politely decline Sharma's proposals are on including questions on Hindutva in the final round of Femina Miss India contest saying that they may not be "comfortable."

The Times of India has put out a clarification on their website refuting the allegations made against them and have called the "so-called ‘sting operations,’ a case of doctoring of content and falsification, as no media organisations named in it agreed to any illegal or immoral activity and no contracts were signed." The report also said that the newspaper group is now seeking legal opinion in order to initiate appropriate action against Cobrapost and Pushp Sharma for their illegal activities and for defamation

"The fact is that BCCL senior functionaries were aware that the person (Pushp Sharma) claiming to be Acharya Atal was an imposter well before they started discussions with him. They were acting under the advice of the BCCL legal team to trap the fraudster and to discover his true intent and details of the people, political formations or businesses backing him. Essentially, BCCL was in the process of carrying out a reverse sting with a plan to make the so-called Acharya Atal commit a mistake or even sign legal contracts so as to expose the people and organisations behind him."

Sharma also meets the vice-chairperson of the India Today group Kalli Purie with his proposal on peddling Hindutva. He told her that the campaign will have three phases which will include subtle peddling of the Hindutva agenda and gradually progress to aggressive 'infield activities'. Purie does indicate that they would be using their editorial judgment by saying, “if you are doing some infield activities that we don’t agree with editorially, we will be criticising you.” But the conversation does not move into any further disagreement between the two sides.

Unlike last time, Cobrapost's sting operation this time also covered India's largest digital payments app, Paytm. The website says that they decided to approach Paytm, an app that has dominant hold in the country with over 200 million subscribers, to understand if they would agree to promote their agenda. They met Vice President Sudhanshu Gupta and Sr. Vice President Ajay Shekhar Sharma who can be seen in the video boasting not just of their close association with the RSS but also confessing hat they have shared their customers data with the government. Ajay Shekhar Sharma is the brother of Paytm founder Vijay Shekhar Sharma.

“Jab JK mein band huye the na pathar … toh humari personally PMO se phone aya tha kaha gaya tha ki data de do ho sakta hai ki Paytm user hon (When the stone-pelting stopped there in J&K, I personally got a phone call from the PMO. They told us to give them data saying maybe some of the stone-pelters are Paytm users. Do you understand)?,” said Ajay Shekhar Sharma to the reporter.

Meanwhile, Paytm have denied the allegations and claim that they have never shared their customers data with anyone, except with law enforcement agencies on request.

There is absolutely NO TRUTH in the sensational headlines of a video doing rounds on social media. Our users' data is 100% secure and has never been shared with anyone except law enforcement agencies on request. Thank you for your continued support.

But for the undercover reporter, there were some unexpected reactions as well. Representatives of two of the newspapers that he stung, Bengali newspapers Bartaman and Dainik Sambad refused to be a part of any deal involving religious content citing their organisational values.

The presence of political propaganda under the garb of editorial packaging has been Indian media industry's worst kept secret. The Press Council of India appointed a 2-member sub-committee (Paranjoy Guha Thakurta and K. Sreenivas Reddy) in July 2009 to examine the issue. The sub-committee submitted their comprehensive 71-page report in April 2010 naming organisations guilty of paid news. While initially a much diluted final report was adopted in July 2010 and released without releasing the sub-committee report, it was finally made public in October 2011 and put up on the PCI website after an independent journalist Manu Moudgil filed an RTI in January 2010, requesting a copy of the report.

You can read the full report here.

Editor's Note: In an earlier version of the story, we had written that the report of the sub-committee was not made public. One of the authors of the report Paranjoy Guha Thakurta brought to our notice that the report was made public after intervention from the Central Information Commission in 2011. We have made the correction in the copy and have hyperlinked the final report in the last line of the story. We regret the error.

Anirudhha Bahal BJP Cobrapost featured India Today paid news Paytm RSS The Times of India Vijay Shekhar Sharma Vineet Jain Zee News
If you value our work, we have an ask: Our journalists work with TruthSeekers like you to publish fact-checks, explainers, ground reports and media literacy content. Much of this work involves using investigative methods and forensic tools. Our work is resource-intensive, and we rely on our readers to fund our work. Support us so we can continue our work of decluttering the information landscape. BECOME A MEMBER
📧 Subscribe to our newsletter here. 📣You can also follow us on Twitter, Facebook, Instagram, Youtube, Linkedin and Google News