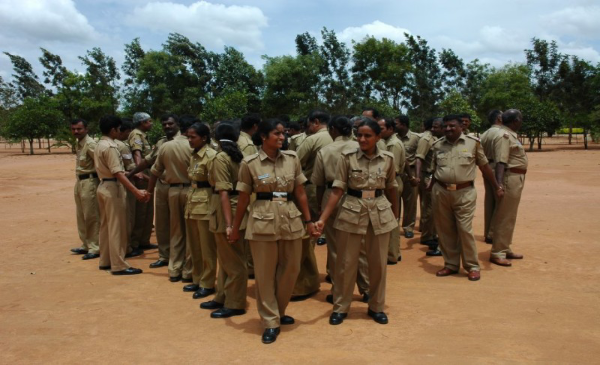 A police personnel from Ranebennur taluk in Karnataka was suspended earlier this week for posting a message related to Prime Minister Narendra Modi on messaging app Whatsapp.

SR Badiger, Police sub-inspector (Law and Order), informed BOOM that head constable Baligar had indeed been suspended for a WhatsApp message but clarified that it was not because he praised a specific party or leader. “He posted the message on an official group declaring his support which is against rules of conduct for policemen. I received a complaint against this from the Superintendent of Police and after confirming for myself the message on the said group, we went ahead with the suspension.”

When BOOM contacted Baligar, he confirmed the suspension order. He said the incident occurred last week when he received a message on the office WhatsApp group which said, ‘Prime Minister Narendra Modi has changed the history of Jammu and Kashmir. The state government has ordered for action to be taken against those who hoist a separate flag…’ Baligar says, “I replied to this with, Namma Rajyake beku Modi (Our state needs Modi). I don’t know what happened after that but the next day I was called by my superior who told me I had been suspended.”

BOOM has not been able to independently verify the message in question which led to the Baligar's suspension. Baligar also declined to show us the message citing confidentiality.

On being asked if any explanation was sought from him for posting a message, Baligar said, “No I was just handed out the suspension. It was my mistake and I am okay with the decision of my superiors.”

The Haveri district Superintendent of Police, K Parashuram,said that the suspension had been issued for violation of Karnataka State Police (Conduct and Discipline) Rules, 1965. He added, “The rules prescribe that any political affiliation or support to a political group by a policeman is not allowed. Hence we issued the suspension order.” When asked which specific rule allows for a policeman to be suspended for posting a message on a WhatsApp group, he did not respond. He further said that no enquiry was held as the head constable’s superiors confirmed the message.

Karnataka High Court Advocate BT Venkatesh said that government employees have to adhere to rules that each department has drafted with regard to political affiliations. “Each government department has its own rules and in this case the message by the police constable was a clear violation. These rules are not restricted to the Model Code of Conduct in place during elections but apply throughout the year. They cannot show open support to any political party or political leader,” he explained.

This is not the first time cops in Karnataka have faced disciplinary action for expressing their political views on social media.

Incidentally, in September last year, a police constable attached to the Ponnampet police station in Kodagu district of the state was suspended for sharing a Facebook post criticising Prime Minister Narendra Modi. The constable had shared a post about protests by Indian Army personnel with a message of his own criticising the PM. After an RTI activist complained against the said post, the constable was suspended pending inquiry. ( Source: Times of India)

In November 2017, Raj Shivappa, a police constable attached to Belthangady police station in Dakshina Kannada district was suspended and disciplinary proceedings initiated against him after he questioned Chief Minister Siddaramaiah's secular credentials. Local Congress leaders lodged a complaint against Shivappa with the local police. (Source: Times of India)