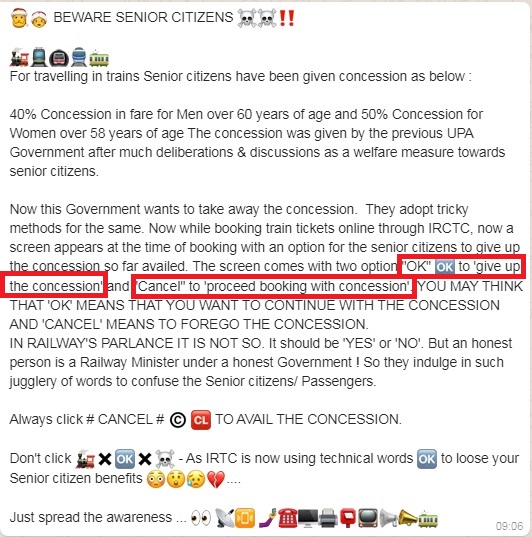 Several messages on WhatsApp groups and websites have claimed that Indian railways is tricking senior citizens in giving up their concession while booking through the IRCTC website. IRCTC stands for Indian Railways Catering and Tourism Corporation Limited.

These messages claim that while booking tickets through IRCTC, a screen appears with the options of OK ('to give up the concession') and CANCEL ('to proceed booking without concession). And, since people in general click OK, they are tricked to paying the full rate.

The WhatsApp message asks the senior citizens to always click cancel to avail the concession.

Several readers sent us these messages on our helpline asking us if the claims are true. We do not think Indian Railways had any malicious intent to trick senior citizens into giving up their concession as this forward claims. However, IRCTC's website before August 10 was cumbersome, confusing and had counter-intuitive dialogue boxes.

We decided to book a ticket for 65 year old Aarti from New Delhi Station to Mumbai CST in Punjab Mail (train). For those who are not senior citizens, the ticket fare amounts to Rs 1,670 /-.

Sample a screen shot from the IRCTC website taken on August 10.

2) Forgo 50% Concession - You opt out of availing the maximum concession, but avail half the concession amount.

3) Forgo Full Concession - You opt out of availing any concession amount and purchase the ticket on full fare.

If the interface is so simple, then why were the WhatsApp messages claiming senior citizens are being scammed by the Railways?

We had tried to book the ticket for 65 year old Aarti on August 9 and had seen a different interface on the IRCTC site.

Below is a screen shot of the site from August 9.

There is more to this. We tried these options and three major scenarios arise out of this.

Scenario 01 - You leave both the columns blank.

You receive the below message on a dialogue box.

If you click OK, you are directed to the final itinerary and you pay Rs 1,670/-.

If you click CANCEL, you remain on the passenger detail page.

Scenario 02 : You tick mark both the columns.

You receive the following message saying that you have opted Senior Citizen concession. 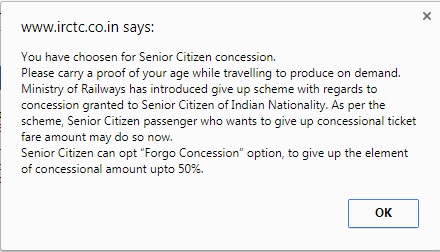 It says by opting 'Forgo Concession', you are giving up the option for concession 'up to 50%'.

If you click OK, this leads you to the final itinerary with fare amount as Rs 1,275/-.

Scenario 03: You tick mark the option for Senior Citizen Concession

You receive the following message which says that you can forgo concession upto 50%. 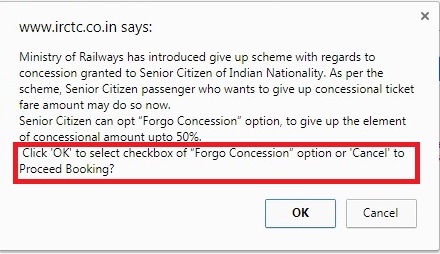 If you click OK, you remain on the same page of passenger details leaving you with the option to forgo concession. This follows as in the case of Scenario 02.

If you click CANCEL you reach the final itinerary with the fare amount as Rs. 880/-.

This shows that scenario 03 offers a higher concession, maximum up to 50%.

For sure, this is confusing especially for senior citizens. No wonder IRCTC changed their interface.

BOOM spoke to senior officials at IRCTC who did not wish to be identified. On being asked if IRCTC had received any complaints regarding this, the source said they have not received any complaints, but have been working on the site and the options for concession. He added that more features will be updated to make it customer friendly.

Earlier senior citizen passenger could either opt for the maximum concession or else forgo the whole concession paying the exact fare amount.

The Railways have claimed that they bear 43% of the cost of passenger fare. But there are no indications yet whether this option to pay the entire fare will be provided to passengers across all age groups.