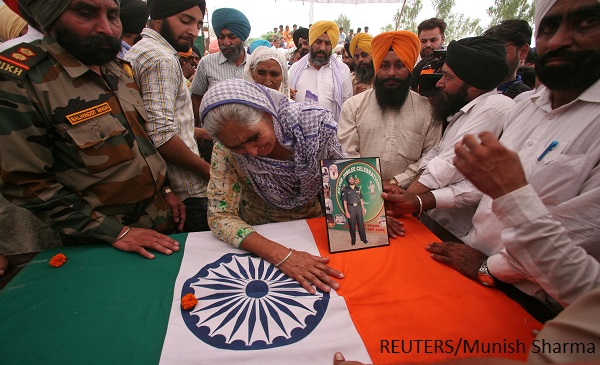 Diplomatic relations between India and Pakistan hit a new low on Monday after the Indian army said two of its soldiers were killed and their bodies mutilated by Pakistan along the Line of Control in an unprovoked attack. A ceasefire agreed to between the two countries in 2003 has seen multiple violations, while diplomatic talks remain suspended.

BOOM traces the latest event that has frayed relations between the two nuclear-armed nations.

The Indian Army's Northern Command publishes a statement that says two Indian soldiers on patrol at the Line of Control were killed in an unprovoked attack by Pakistan's army at the Krishna Ghati Sector, Poonch district, Kashmir. Adding that simultaneously Pakistan's Border Action Team (BAT) launched an attack on a patrol operating between the two posts. In a more grievous charge, the Indian army says that bodies of two of its soldiers Naib Subedar Paramjit Singh and Prem Sagar, were mutilated.

“Pak army carried out unprovoked rocket and mortar firing on two forward posts on the Line of Control in Krishna Ghati Sector... Simultaneously a BAT (border action team — an amalgam of terrorists and Pakistan army regulars) action was launched on a patrol operating between the two posts. In an unsoldierly act by the Pak army, the bodies of two of our soldiers in the patrol were mutilated,” the Indian Army’s Northern Command said in a statement.

The Indian army's chief military spokesman tells the BBC that one of the soldiers in the attack was beheaded. "Troops searched the area afterwards but could not find the head, the spokesman said. India believes the Pakistanis took the head with them when they retreated," BBC reports.

Arun Jaitley, India's finance minister who also holds the charge of defence, expresses condemnation and says the government has full confidence in the armed forces to react appropriately.

The Act of killing & mutilating the bodies of two of our soldiers is the most reprehensible & barbaric. The sacrifice will not go in vain.

We have fullest confidence in our Armed forces who will react appropriately.

Pakistan on its part denies any ceasefire violation along the Line of Control and says the charge of mutilating the bodies of two Indian soldiers, is also false.

Pakistan Army did not commit any ceasefire violation on LoC as alleged by India. Indian blame of mutilating Indian soldiers is also false.

Indian news outlets, including India Today claim that the Indian army has destroyed two bunkers and killed seven Pakistani soldiers along the Line of Control, in retaliation, citing "reports". However the Indian army has not said anything about a retaliatory attack so far.

The Indian army's official communication handle on Twitter publishes the following statement about the Director General of Military Operations speaking to his counterpart in Pakistan. More details of the attack are provided. India's DGMO says the attack merits 'unequivocal condemnation and response.'

Lt General A K Bhatt, Director General of Military Operations (DGMO), spoke to Pakistan and expressed grave concern over the incident. BSF has said that the attack was very well coordinated.

The 42-year-old soldier belonged to the Indian army’s 22 Sikh Infantry. The slain soldier is given full military honours and cremated in his native village Vainpoin in Punjab’s Tarn Taran district. Singh is survived by his aged parents, wife and three children.

50-year old Prem Sagar belonging to the 200th Battalion of India's Border Security Force (BSF), was one of the two soldiers who were killed and mutilated along the Line of Control. His last rites are performed in Uttar Pradesh's Deoria district. Sagar is survived by his wife and four children.​

India summons Pakistan High Commissioner Abdul Basit in New Delhi to communicate outrage over the attack and demand strong action from Pakistan. The Pakistan envoy was called in by India's foreign secretary S. Jaishankar. A statement by India's Ministry of External Affairs says "Blood samples of Indian soldiers collected and the trail of blood on Roza Nala clearly shows that the killers returned across the LoC (Line of Control)."