Picture used for representational purpose only

In what has come as a major embarrassment for the government, a Thomson Reuters Foundation survey of around 550 global experts on women's issues has ranked India as the world's most dangerous country for women. India has got this dubious ranking due to the high risk of sexual violence and being forced into slave labour.

If the foundation's own survey last done in 2011 is taken as a benchmark, India who ranked fourth behind Pakistan has taken the top spot this time, showing that the country's record towards improving women's safety has only deteriorated over the years.

Congress President Rahul Gandhi lashed out against the government who tweeted -

While our PM tiptoes around his garden making Yoga videos, India leads Afghanistan, Syria & Saudi Arabia in rape & violence against women. What a shame for our country! https://t.co/Ba8ZiwC0ad

However, the National Commission for Women (NCW) rejected the report saying that the sample size was small and not representative of the country with a population of 1.3 billion. Rekha Sharma - Acting Chairperson of NCW said, "Women in India are aware of their legal rights and the procedure and method of access to the legal system more than ever before. Some of the countries that have been ranked after India have women who are not even allowed to speak in public". Below is the press release by NCW. 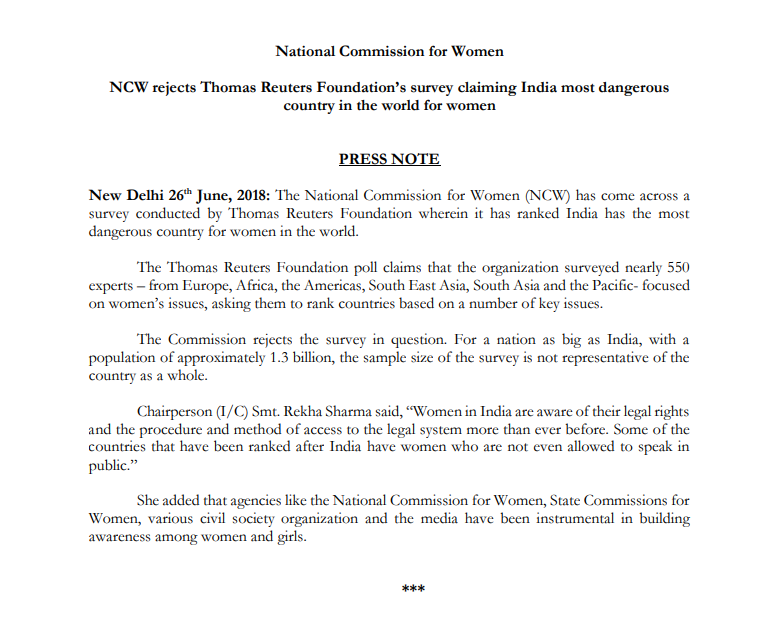 According to NDTV, the Ministry of Women and Child Development has also rejected the report.

India featured 4th in the the 2011 list - Afghanistan, Democratic Republic of Congo, Pakistan, India, and Somalia.

7) The report referred to India as 'most dangerous country for women with sexual violence rife'. The report said that India moving to the top of the poll shows that not enough steps have been taken to protect women despite the issue of violence against women becoming a priority after the 2012 Nirbhaya gang rape case. Citing government data, the report said that crime against women increased by 83 percent between 2007 and 2016, and that four cases of rape are reported every hour in the country.

Note: The story has been edited to include the press release of the National Commission for Women.