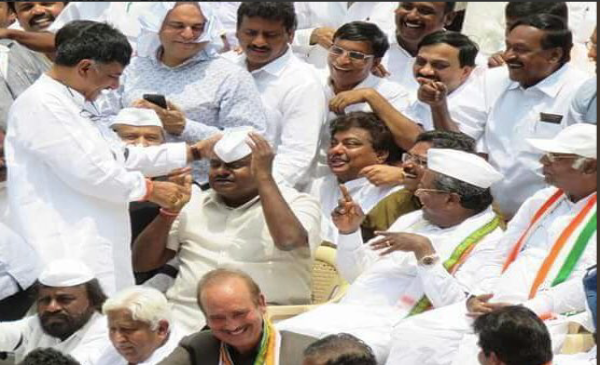 The dramatic end to the government formation drama in Karnataka finally happened when the 3-day Chief Minister BS Yeddyurappa announced his resignation without opting for the trust vote in the state assembly. It was eyeballs to eyeballs ever since it became clear on May 15 that neither of the three parties in Karnataka would have enough seats to form a government on its own comfortably. Eventually the Congress-JD(S) combine held its nerves despite a formidable Amit Shah-BS Yeddyurappa duo along with the Reddy brothers trying their best to win the trust vote.

The Congress has often been blamed for their High Command structure. But this time, except for Ghulam Nabi Azad being sent from Delhi, the party leadership left the micro-management of the formation of the alliance and dealing with the MLAs to the local leadership of the state. This team was supported by a group of Supreme Court lawyers and senior party leaders led by Abhishek Singhvi and Kapil Sibal filing crucial petitions in the Supreme Court in Delhi.

We bring you 5 steps the Congress and the JD(S) took to win this important round against the BJP forcing the party to make a tactical retreat instead of facing a humiliating defeat on the floor of the house.

As the results of the Karnataka assembly elections started to trickle in on May 15, all numbers pointed to a clear BJP victory. Unlike the past when they were caught napping, a disappointed Congress made lightning quick decisions and approached the Janata Dal (Secular) headed by HD Kumaraswamy and announced an alliance. BJP now had 104 seats and a combined power of Congres (78) and JDS (38) had a total of 116 seats. Cong-JDS numerically had the strength to prevent the BJP from coming to power in Karnataka.

The alliance between JD(S) and Congress was deemed to be impossible till it actually happenend. In the past, an alliance between the parties lasted for just over a year before HD Kumaraswamy broke it and turned to BJP. An alliance this time would mean keeping aside past differences and forgoing the dream of a Congressman sitting on the chief minister's chair. But Congress not just allied with the JD(S) it also agreed to HD Kumaraswamy to be the Chief Minister and continue the alliance with the party for the big battle of 2019 elections.

3. A midnight knock on the Supreme Court's door

When Governor Vajubhai Vala invited Yeddyurappa and BJP to form the government despite not having enough numbers, the Congress understood that time is running out for them. The party wasted no time and immediately approached the Supreme Court and a hearing was held at midnight contesting Vala's decision to invite the BJP. The hearing saw Abhishek Manu Singhvi appearing for the Congress and Mukul Rohatgi for the BJP that saw the court-room arguments extend till 4:30 am early Thursday morning.

The three-judge bench of Justices A K Sikri, S A Bobde and Ashok Bhushan while not delaying the swearing ceremony of Yeddyurappa asked him to submit the letter that he claimed he had given to the governor proving the party had the numbers to form the majority. This move to approach the SC by the Congress was not a sudden one, with sources revealing that the planning for legal recourse had begun on the afternoon of May 15, when Yeddyurappa had a meeting with Governor Vala to stake claim on forming the government. This meeting was followed by HD Kumaraswamy and other Congress leaders visiting the Governor submitting a letter that all their MLAs were on their side. While Bangalore saw meetings with the Governor, in Delhi the legal relief was being put in place to prepare for any sudden moves planned by the BJP.

4. The second knock on the Supreme Court's door

After the first visit, the second hearing was when the wheels statred turning in Congress' favour. The Supreme Court ordered that the floor test to prove the majority for forming the government be conducted within 24 hours and not in 15 days as Governor Vala had earlier ordered. This gave BJP no time to poach any of the Congress or JD(S) MLAs. The Congress did try again on Saturday morning approaching the SC to challenge KG Bopaiah's appointment as pro tem Speaker but failed to get a positive result. But the party did manage to force the BJP on the back foot with the Supreme Court reversing its earlier order of not allowing videography of the proceedings. The BJP informed the court that the trust vote will be telecast live by news channels.

Both the parties knew the risk of losing even a single MLA. To ensure their members did not stray over to the BJP, all the elected members were first holed up in a resort near Bidadi. Meanwhile an attempt was made to fly out the MLAs by a private jet but the Congress cried foul alleging that the BJP government at the centre blocked the move through the aviation regulator DGCA. This allegation was refuted by the Aviation Minister of state Jayant Sinha.

The word was then put out that the members were then being taken to a resort in Cochin but soon all of them were taken to Hyderabad where they camped till it was time for the floor test. The Congress also named and shamed many BJP leaders including Yeddyurappa, Sriramalu and BJP aide Janardhan Reddy by releasing recordings of calls allegedly made by these leaders to various Congress MLAs offering them ministerial seats, money and erasing of criminal records if they moved to Camp BJP (BOOM has not been able to independently verify any of these phone calls).

Senior state Congress leader D K Shivakumar kept the MLAs together and with Ghulam Nabi Azad ensured the return of the missing MLAs Anand Singh and Pratap Gouda in time to take the oath in the assembly.

In many ways, this put a lot of pressure on the BJP as well as those MLAs receiving these alleged offers as the drama began to play out in full public view with several press briefings by the Congress and the JD(S) leaders.

In the final analysis, the SC's intervention reducing the time given to the Yeddyurappa government for the trust vote from 15 days to 24 hours spoilt BJP's calculations. This also ensured if any attempts at horse trading were being attempted, the paucity of time and the lack of access to the MLAs did not give the BJP enough confidence to test their strength on the floor of the house.