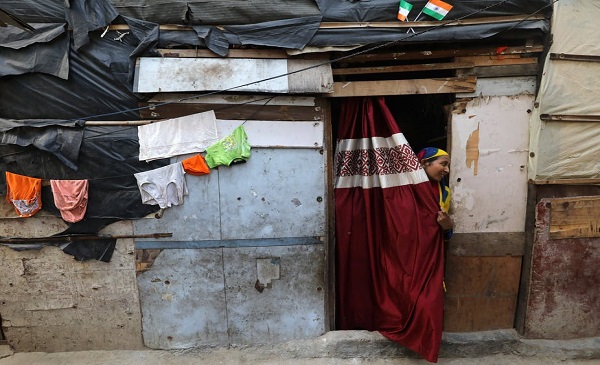 A woman from a Rohingya family, in the makeshift provided by a NGO Zakat Foundation of India near Madanpur Khadar, New Delhi. EPA

Attempts by the Indian government to deport tens of thousands of Rohingya refugees have thrust the country’s laws into the spotlight.

Lawyers representing the Rohingyas have reiterated the constitutional right (of citizens and non-citizens alike) to equality, life and personal liberty in India. Meanwhile, the government has claimed such refugees may pose a security threat to the state.

Both sides have been making their case at the Supreme Court.

What effect does this legal precariousness have on the ground? For one thing, it means the majority of refugees in India head for cities – where there is the possibility of anonymity and opportunities for work.

Delhi is often the preferred destination for refugee groups that fall within the UNHCR’s mandate. In the capital, these groups have the possibility to get refugee certificates and access to certain support services, such as education, health, livelihoods, and legal counselling.

However, these services are limited in number, reach, and budget. They can also be curtailed at short notice. Often, refugees in urban India can only rely on themselves.

Self-organised social safety nets look different for different groups. In the early 1990s, nearly 50,000 Sikh and Hindu refugees fled Afghanistan following a spike in ethno-religious violence. In 1992, a group of them in Delhi set up their own organisation - the Khalsa Diwan Welfare Society (KDWS) - dedicated to the support of their refugee community. KDWS is funded through membership fees, and helps other Sikh and Hindu Afghan refugees (numbering around 15,000 in Delhi) struggling to receive the assistance they need from the Indian government.

It focuses on education and skills development, including teaching devotional music, language classes, stitching, and computer skills. More informally it offers reconciliation and support for domestic disputes and grievances. Because of their perceived resilience and community cohesion, they are viewed as a model refugee community. One of UNHCR’s NGO partners has even used their facilities to run other refugee services.

Chin refugees from Myanmar, too, have their own community support systems. A minority religious and ethnic group persecuted by the Burmese military, they have fled to India in waves over the last four decades and are settled primarily in Mizoram, Manipur and Delhi. In Delhi they number around 4,000 and are largely clustered in the west of the city. The community has a hired floor in an apartment block where – with the support of their church and some NGOs – they run language, computer, and stitching classes, and also previously, their own clinic with a Chin doctor.

As a Christian community, the church is an important part of their urban social safety net. The same goes for Christian Afghans, who number a few hundred in India’s capital and live in the south of the city. “It’s good,” explained a young Christian Afghan to our research team, “because of the church I have some friends.”

Some of the Rohingyas have also self-organised. A small number of prominent youths established a Rohingya Literacy Programme and women’s empowerment initiatives, as well as actively networking with the aid community to augment support and services. Their football team the Shining Stars, is an important social initiative offering bridging opportunities to other groups in Delhi, as they play solidarity matches with other teams in the city.

The existence of these community organisations speaks of the opportunities that exist in a city. Urban environments more readily provide enough working people in close proximity to enable a membership model (such as with KDWS). Cities also offer malleable spaces, for the transformation of apartments into community centres (such as for the Chins) or wasteland into a football pitch (for the Rohingya Shining Stars).

However, it would be a mistake to laud these community initiatives as solutions to the problem of ensuring adequate refugee protection in India. Many arise due to severe access gaps in Indian public services.

It was the discrimination they experienced in Indian schools and clinics that led the Chins to establish parallel schools and a health clinic. Moreover, not only is sustainability precarious (the clinic run by a Chin refugee doctor had to close when he was resettled), it also reinforces segregation. The same Christian Afghan refugee who praised the support of his church network also spoke about such difficulties. He said: “It is unlucky to be stuck in such a situation [as a refugee] … the loneliness is different.”

The Rohingya youths have established their literacy and empowerment initiatives partly because of gaps in services and lack of staying power of many aid organisations. They describe a lack of funds as preventing sustainability and expansion. “The challenge with this job is that for me to help such people, it requires money,” one explained, “but in my community people are illiterate and poor. How will they pay?”

Moreover, these self-organised communities can exacerbate – or create – community hierarchies, discrimination and exclusion. As another refugee in Delhi explained: “The community leaders are selected on the basis of their connectivity with the NGOs.” This so often means men with a command of English.

While self-organised groups provide essential safety nets for refugees in Delhi, they are clearly not a replacement for governmental and NGO services. India not only urgently requires a robust, inclusive legal framework that protects refugees, the government and NGOs also need to re-approach how they can better support vulnerable communities to access wider public and aid services.

This increased support requires the government to change its restrictive position on humanitarian and development NGOs. Too many, especially those with international connections, are being weakened or closed down with recent changes in laws regulating foreign funding. Many argue this is driven by ideological motives to quash dissent.

This is exacerbating the pressure on already vulnerable refugee communities to make their own safety nets.

This story was first published in The Conversation here.