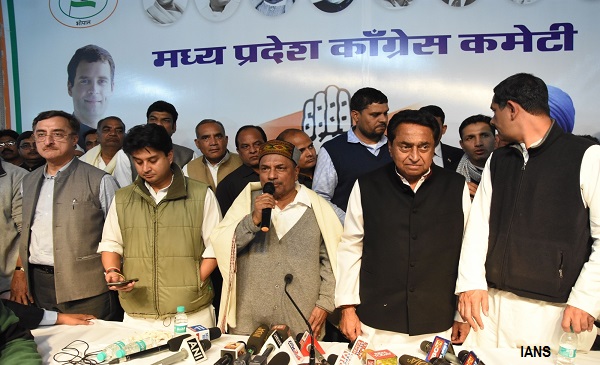 Bhopal: Congress leader Jyotiraditya Scindia, party observer AK Antony with Kamal Nath and other leaders during a press conference announcing Kamal Nath as the next Chief Minister of Madhya Pradesh in Bhopal on Dec. 13, 2018. (Photo: IANS)

After 3 terms of sitting in the opposition, the Congress may have emerged as the single largest party with 114 seats, but a closer look at the vote share and margins show that the BJP was extremely close to winning the state yet again. While the BJP eventually settled at 109 seats, falling short of 7 seats of the mid-way mark, the party lost 7 seats to Congress for just less than 1000 votes. Also, in all these constituencies, NOTA bagged more votes than the winning margin.

BJP had a higher vote share than the Congress

While the Congress bagged the most number of seats, BJP got 15,642,980 votes - the highest vote share (41%) of the total votes polled. This means that 41% of the people who voted in Madhya Pradesh had given their votes to the BJP.

The BJP required 7 more seats to hit the half way mark of 116 to form the government on its own.

If taken into consideration, NOTA - None Of The Above - would have been the 5th largest party in Madhya Pradesh with a vote share of 1.4% and 5,42,295 votes. These were the votes that none of the parties could tap into and through which people declared their dissatisfaction with the political parties in the state.

NOTA also played a major role in deciding the fate of Madhya Pradesh because 13 out 22 of these seats went to either Congress or the independent candidates. The break up is - Congress (12), Independents (1) and BJP (9).