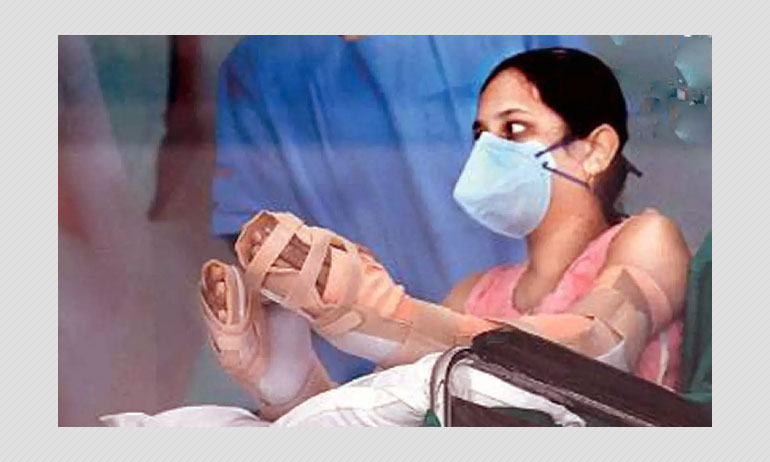 Twenty-four-year-old Monika More was discharged on September 26, a month after successfully undergoing a bilateral hand transplantation in Parel's Global Hospital. More became the first patient to have successfully gone through this surgery in Mumbai.

Global Hospital has now been inundated with several enquiries for hand transplantation after this successful attempt that was led by Dr. Nilesh G. Satbhai. Dr. Satbhai, however, laments that it is difficult to keep up with the increasing demand for surgeries as there are not many families willing to donate exterior organs such as limbs from the deceased.

"Hand transplantation is surrounded by taboo due to the lack of awareness about the organ donation policies. Families do not want to donate hands as it defiles and mutilates the body before being cremated or buried, " Dr. Satbhai, Consultant Plastic, Aesthetic, Hand & Reconstructive Microsurgeon, Global Hospitals, Mumbai, told BOOM.

This lack of initiative in terms of cadaver and exterior organ donation plagues several hospitals that have received permission to conduct hand transplantations and have patients enlisted for the expensive surgery. Mumbai's KEM hospital received approval to perform hand transplantation surgery in 2015, but has not conducted any yet. Transplant coordinators and officers convince families of the brain-dead or deceased to donate their various organs through organ donation camps. India has national, state, regional, and zonal transplant organisation regulatory bodies and every hospital has a transplant coordinator.

More's operation is the first successful attempt in Western India, so far. More, who lost both her arms in a gruesome train accident at Ghatkopar Station in 2014, signed up only after reading about another successful hand transplantation story. She read about Shreya Siddanagowder a 19-year-old's successful operation at a hospital in Kochi.

Also Read:Explainer: What Is The Unlawful Activities (Prevention) Act

Amrita Institute of Medical Sciences (AIMS), Kochi is regarded as the pioneer in hand transplantation surgeries in India. Plastic surgeons at the hospital conducted the first successful bilateral transplantation in 2015 and have performed several other surgeries, ever since.

In 2015, the hospital conducted two double hand transplants for stumps originating near the wrist area. In 2016, they conducted the first forearm transplantation which is a more challenging process as it requires the cut to be made above the elbow. Siddanagowder was the first female to receive a brain-dead man's hands at AIMS. The skin of her transplanted hands changed colour and doctors felt that it could be due to the female hormones surging through her body.

The number of new patients enlisted for transplantations exceeds the number of registered donors. While describing the process of the first transplant, Dr. Subramania Iyer, Director of Plastic and Reconstructive Surgery and HOD of Head and Neck Surgery at the hospital, explained how difficult it was for transplant coordinators to convince families of brain-dead or deceased patients to donate the upper limbs in a book.

Other than Amrita Hospital, eleven other institutes have received permission to conduct this surgery. However, only three others have successfully conducted transplantations. The National Organs and Tissue Transplant Organisation does not have a record of the total number of hand transplants on its website. BOOM has written to the organisation and the story will be updated on receiving a response.

Government Stanley Medical College from Chennai, Tamil Nadu, performed one in 2018 making it the only government hospital to have conducted a hand transplant successfully.

A transplantation performed at the Armed Forces Medical College in 2018, Pune failed after the recipient's body rejected the donated hands.

What Is The Procedure

Dr. Satbhai told BOOM that a bilateral hand transplantation takes around 14- 18 hours, after conducting tests that suggest the donor organ is suitable for the recipient.

"We conduct a cross-match to see that the results of the HLA antibodies are negative, thus making the organ suitable to be transplanted."

After the cross-matching is negative, it is imperative that the surgery is undertaken immediately. " Once removed from the donor's body, blood circulation should begin in the organ at the earliest, so as to reduce the ischemia time. Prolonged ischemia can result in transplant failure or suboptimal functional outcome," explained Dr. Satbhai.

Ischemia time is of two types. Warm ischemia is the time within which an organ can stay at body temperature after its blood supply is cut off and it is chilled. Cold ischemia is the time between the organ remaining chilled and when the blood supply is restored. For hands, cold ischemia lasts between 50 minutes to 12 hours depending on the geographic distance between hospitals. "The goal is to end the ischemia time within 6 hours of harvest, so that the tissues are well perfused while working on the other structures," said. Dr. Satbhai

The surgeons first flush the harvested organ with University of Wisconsin solution to flush out the donor's blood before preserving it. Four teams work simultaneously- two on each hand to dissect and tag each tendon, blood vessel, muscle, nerves, veins, skin flaps in both the recipient and donor hands. "After fixing the bone, the blood vessels are first repaired so as to ensure perfusion (flowing of blood) of the transplanted hands ," explained Dr. Satbhai. Furthermore, the veins, nerves, tendons, and muscles are also repaired sequentially.

On restoring the blood supply, the body may react to the transplanted organ and could lead to hyperacute rejection as witnessed in Pune. The first 48-72 hours are important to understand whether the body has accepted the new organ. "In Monika's case, we are out of the first phase and her body has not shown any adverse rejection reactions. Now, over the next few months, the restoration and regeneration of the muscle and nerve functions have to be focused on," added Dr.Satbhai.

Recipients are expected to be on immunosuppressants all their life to ensure that their immune response does not act adversely on the body, reports Mayo Clinic.

"Hand transplants are more challenging not only due to the taboo among donor families but also because hands and skin having more antigens than any other organs in the body. As they are highly immunogenic ensuring near-perfect organ matching that does not reject the organ or develop an immune response in the host is a vital step for long-term success." concluded Dr. Satbhai.

Also Read:Cardiac Arrests Even Affect The Fit: All You Need To Know