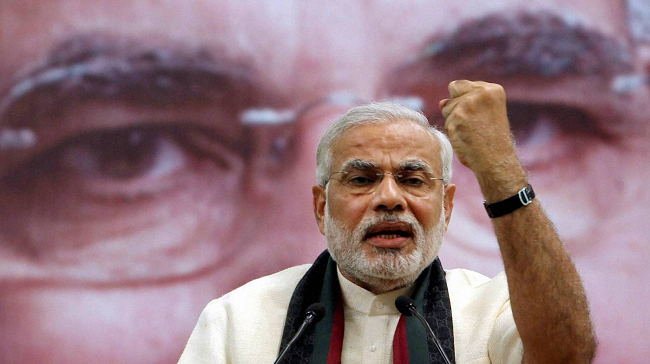 The government also said India would grow at 7.1 percent in 2016-2017 defying economists’ expectations of a sharper cut to growth due to the noteban.

“One side we have a community of intellectuals who speak in the name of Harvard and on the other side, there is this son of a poor mother, who through hard work is trying to change the economic policy of this country,” the prime minister said at a rally in Uttar Pradesh.

Earlier reacting to the latest GDP number, former finance minister P Chidambaram sounded skeptical and said it was too early to celebrate. The former minister has a degree from Harvard Business School.

Prime Minister Narendra Modi’s shock announcement to ban 500 and 1000 rupee notes to curb black money and rein in corruption sucked out 86 percent of the currency in circulation but left ordinary citizens scrambling for cash.

Although Modi did not name anyone, his remarks are believed to be targeted at Nobel laureate and Harvard professor Amartya Sen, former prime minister Manmohan Singh and P Chidambaram, vocal critics of demonetisation.

Sen had called demonetisation a ‘despotic act’ striking at the root of an economy based on trust. He is a Thomas W. Lamont University Professor, and Professor of Economics and Philosophy, at Harvard University.

Meanwhile former prime minister Manmohan Singh, who has studied at Cambridge and Oxford, said in parliament last year that demonetisation had been a ‘monumental mismanagement’ and that GDP would shrink by 2 percent.