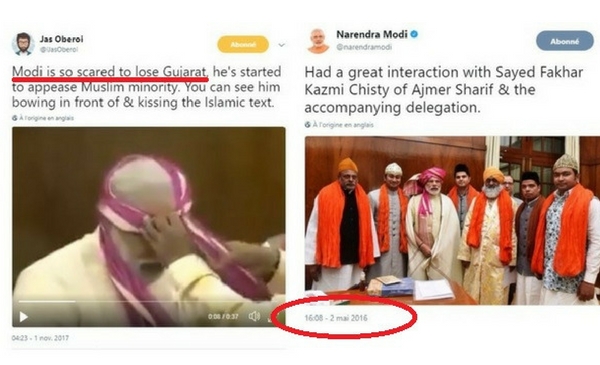 A 2016 video of Prime Minister Narendra Modi meeting with a delegation from the Ajmer Sharif Dargah (shrine) in Rajasthan is being shared on Twitter with a misleading context of the prime minister reaching out to leaders of the Muslim community in Gujarat ahead of state elections in December this year. Ajmer Sharif Dargah is a shrine of sufi saint, Moinuddin Chishti located at Ajmer, Rajasthan

In the video, Modi can be seen meeting with Sayed Fakhar Kazmi Chisty who ties a 'safa' or 'pagri' (headgear) for the prime minister and presents him with mementos including what appears to be a religious text.

However, some Twitter users decided to give it a nefarious spin linking it to the upcoming election in Gujarat.

Modi is so scared to lose Gujarat, he's started to appease Muslim minority. You can see him bowing in front of & kissing the Islamic text. pic.twitter.com/vwfrVBcnbE

Aam Aadmi Party (AAP) spokesperson Sanjay Singh quoted the above tweet and in a sarcastic dig thanked the prime minister for letting Muslim religious leaders tie him a pagri but claimed that the meeting took place behind closed doors, implying the meeting was secret. At the time of writing this story Singh's tweet received over 1200 Likes and over 570 retweets.

The meeting with the delegation from Ajmer Sharif took place on May 2nd, 2016 and was not a secret meeting. In fact both the prime minister and PIB (Press Information Bureau) tweeted about it in 2016.

Had a great interaction with Sayed Fakhar Kazmi Chisty of Ajmer Sharif & the accompanying delegation. pic.twitter.com/1zcZJ9R164

Pictures from the meeting have also been shared by pmindia.gov.in a website that is run by the prime minister's office. 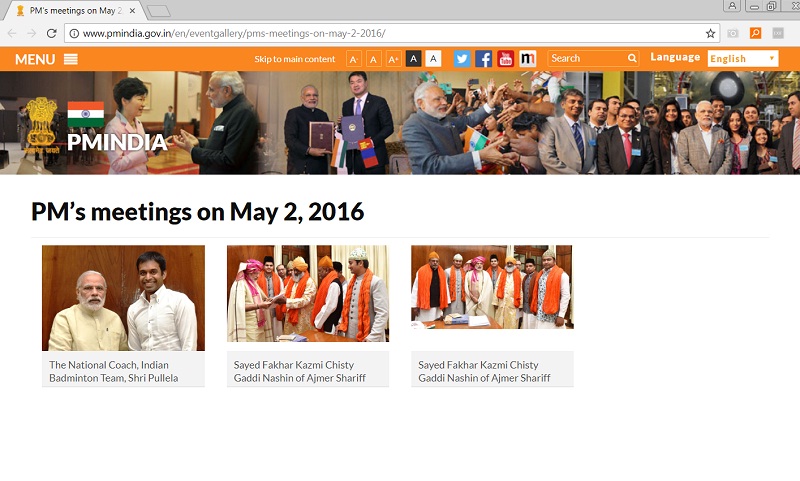 The scrutiny Modi is subjected to while meeting leaders from the minority community especially Muslims has an interesting history.
During his Sadbhavana fast in Ahmedabad in September 2011, Modi had refused to put on a 'skull cap' offered by a Muslim cleric.

Politely refusing to wear it, Modi asked the cleric to offer a shawl instead. The imam did so and Modi accepted it.

Aam Aadmi Party AAP Ajmer Sharif Fact Check featured Muslim Narendra Modi Prime Minister Narendra Modi Sanjay Singh Sayed Fakhar Kazmi Chisty
If you value our work, we have an ask: Our journalists work with TruthSeekers like you to publish fact-checks, explainers, ground reports and media literacy content. Much of this work involves using investigative methods and forensic tools. Our work is resource-intensive, and we rely on our readers to fund our work. Support us so we can continue our work of decluttering the information landscape. BECOME A MEMBER
📧 Subscribe to our newsletter here. 📣You can also follow us on Twitter, Facebook, Instagram, Youtube, Linkedin and Google News 📝Stay updated with all our latest fact check stories.