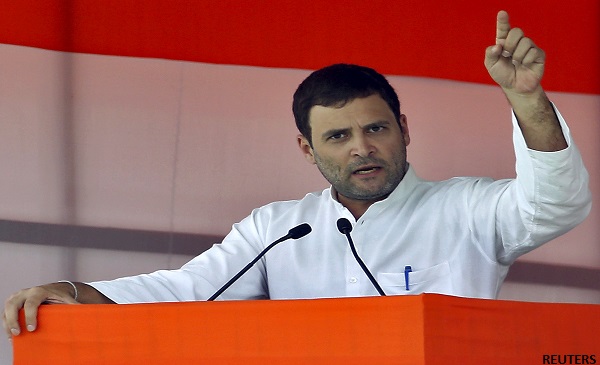 Congress Vice President Rahul Gandhi has accused the Bharatiya Janta Party (BJP) of stealing the mandate of people and undermining democracy in Goa and Manipur by use of money power. Dismissing the frustration of his own party MLAs in Goa for failing to stitch together a post poll alliance despite being just 4 seats short of majority, Gandhi said, “It is a question of how much the BJP has thrown to steal the mandate of people of Manipur and Goa. That is the question. It is not about how soon they went, but with how much money they went".

This is the first time Gandhi took questions from reporters after the results of the elections to five states were declared on March 11.

But Rahul Gandhi's statements raise 5 questions on whether he is serious about running the party.

1) Did BJP steal the mandate in Goa through money power?

Though there is merit in the statement by Gandhi that the BJP did not have the mandate from the voters in Goa this election, the Congress has not covered itself in glory either by how they failed to seize the initative. The BJP won 4 seats less than the Congress at 13 seats and should have ideally chosen to sit in the opposition rather than fight hard to form a government. But government formation cannot be judged on morality alone; ability to stitch post poll alliances is also equally important. And the BJP moved swiftly on that front even as the Goa Congress leadership were bickering with senior party leader Digvijaya Singh on their chief ministerial prospect. Out of the two alliance partners the BJP claims to have in its kitty, the Maharashtrawadi Gomantak Party or MGP is a former ally while the Goa Forward party fought the elections primarily against the BJP. The Goa Forward has much to answer when it faces its voters next on the u-turn but that need not stop the BJP from seeking support in a bid to form the government.

Gandhi claims that the BJP stole the mandate through money power. But no evidence is available as of now to suggest money has exchanged hands. One may argue it is difficult to prove horse trading. Precisely why such statements should be taken with a pinch of salt as BJP is not the first party in the country who have wooed smaller parties and independents in a bid to form government.

2) Did the Congress deserve to form the government in Manipur?

Nothing can be further from the truth than the belief by the Congress that they deserve to return to power in Manipur. What they believe to be true in Goa does not seem to apply in the case of Manipur. Yes, on the face of it, Congress won more seats (28) than the BJP (21) but as compared to the last election, the Congress lost 14 seats while the BJP went from zero to 21. The 'mandate of the people' argument can be turned on its head to justify why the BJP felt that the people of Manipur expect them to administer the state. Either ways, three-time Congress CM Okram Ibobi Singh tried his best to get 3 legislators to back his claim but failed miserably.

The Congress has much to introspect why the smaller parties, NPP, LJP and the Nagas People Front chose to go with the BJP rather than support them.

Language skills have never been the strong point of Rahul Gandhi. So one can excuse the Congress scion for not being impressive at all times. But after having won just 7 seats out of the 105 contested in a 403-strong state assembly, the assessment can be a bit more serious than limiting it to being a "little down in UP". In a state that has one sixth of the total population of the country and sends 80 MPs to Lok Sabha and 31 MPs through the Rajya Sabha route, the Congress has been reduced to its lowest performance. There is no doubt that the BJP had a better election strategy and attributing it 'largely to polarisation' points out why the party is in a mess.

4) Can the Punjab win be cited as an example of importance given to state leaders in the Congress?

While Captain Amarinder Singh, the 75-year old election veteran of the Congress may now be gracious in not targeting Rahul Gandhi, it is no secret that he had to fight a stiff battle with the central leadership of the party to ensure he has the final say in the party's campaign in Punjab. The Congress unlike the BJP have failed to nurture local state leaders due to its high command culture that ensures no leader grows in stature beyond the Gandhis in the party. The party's mishandling of Jagan Mohan Reddy, son of Congress satrap Y.S. Rajasekhara Reddy who died in a chopper crash in 2009 ensured they could never recover in the state even after ensuring its bifurcation in 2014. The Lok Sabha seats won by YSR in the state ensured Congress governments in 2004 and 2009 but the party failed to read the mood of the voters in Jagan Mohan Reddy's favour post his father's sudden demise.

5) Is Rahul Gandhi serious about making structural changes in the Congress?

We have been hearing about these structural changes ever since the Congress got reduced to its lowest in Parliament - 44 seats in the 2014 general elections. Over the last 2 years, the Congress has lost key states like Maharashtra, Haryana, Assam, Delhi, Kerala and now Uttarakhand and Manipur. If the Congress party was run like a corporate with Rahul Gandhi being the CEO, the shareholders would have asked for his resignation for not just failing to win any new clients but also losing its existing prime clients to the rival. But such introspection and action are alien concepts for the grand old party of India. Even after such a colossal loss, only one Congress leader Sandeep Dikshit gathered the courage (probably because he has been out of favor for long) to say that the top leadership needs to take responsibility in a not so veiled attack against Gandhi. Senior Congress leaders like Ghulam Nabi Azad still finds the courage to defend Rahul Gandhi over the poll debacle in UP, saying the results are not a referendum on him.

“If you hold him responsible for defeat, you should credit him for winning Punjab also,” Azad said.

One can't argue against such logic.