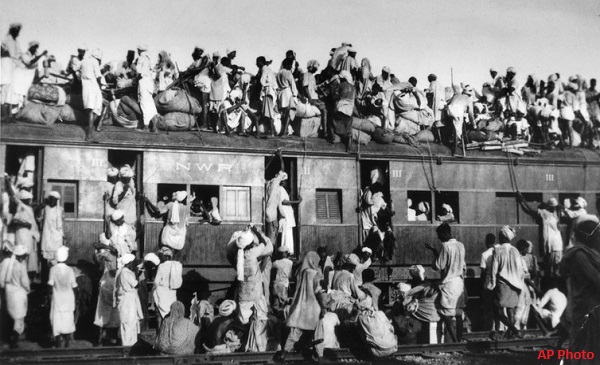 People fleeing during partition sit on top of a crowded train. AP Photo

As citizens of India and Pakistan celebrate 70 years of their independence in August, they will also remember 1947 as the momentous year of their simultaneous birth. That year, the British quit their "jewel in the crown" and partitioned colonial India on the basis of religion.

What followed in the aftermath of the partition was one of the largest forced migrations of the 20th century. Over the next two decades, nearly nine million Hindus and Sikhs moved into India and approximately five million Muslims to a spatially fragmented East and West Pakistan. This movement was accompanied by horrific mass violence which targeted women through rape and abduction and left an estimated million dead.

Scholars have called the partition the "other face of freedom."

But, as late as the summer of 1946, hardly anyone could have foretold that partition would be the political solution to the transfer of power at the end of the long nationalist struggle for independence. Nor would people have predicted that it would lead to such horrific violence and mass uprooting, causing long-term memories of exile and loss.

So what led to this division? And why 1947? As a scholar of South Asian history, I would suggest that there are multiple and complex reasons.

In fact, many divisions had been a long time in the making.

Early on, the British justified their subordination of India by claiming that Indians were socially and morally weak. And they mistakenly viewed their Indian empire as a set of distinct communities. They also saw them as being in conflict with each other, ignoring the interwoven cultural and shared traditions at the time.

It was this British view that eventually translated into giving political representation based on religious identities. This meant that Indians could gain political power (however limited) only through separate electorates based primarily on their religion. Thus, Hindus could elect their own Hindu representatives and Muslims could do the same.

Scholars note that these trends taken together led to the emergence of Muslim separatism from the 19th century onwards. It culminated in the idea that Hindus and Muslims were distinct and that India comprised "two nations" sharing different histories and cultures.

The idea of Pakistan

Other scholars have argued that it was the politics of the 1930s onwards that led to the partition.

Here the key debate was about the demand for Pakistan, a separate homeland for Muslims. One of the reasons the idea of Pakistan started to gain popularity was that Mohammed Ali Jinnah, the leader of Muslim League, the main Muslim political party, did not define clearly the geographical coordinates of Pakistan. Indeed, the very vagueness of the location of Pakistan was what helped in getting support from Muslims across India who were divided by language, culture and class and, most of all, geography.

Pakistan carried different meanings for different groups: To farmers in the Eastern state of Bengal it meant a "peasant utopia" where they would be free of landlord oppression. For the elite Muslims in northern India, it meant a "new Medina," a new civilizational heart for Muslims in the subcontinent and beyond.

It should be said, however, that the idea of Pakistan was not supported by all Muslims: More than half of them would remain in India after partition.

The road of many paths

As the debate over Pakistan developed, other events were taking place as well. After 1935, Indians received a larger share of political representation under colonial rule. Such devolution of power, however, meant little as Indians were forced to join British efforts in the Second World War.

It was in the middle of the war, in August 1942, that Gandhi called for the British to "Quit India" permanently. The famine in Bengal in 1943 that ravaged the lives of an estimated three million Indians added to perception of the colonial state's negligence and inability to continue to administer its Indian empire.

All in all, the stage was set for discussions on India's independence.

After the war, there were many options on the negotiating table. These included the possibility of a united India with a strong center where Muslims would be equal citizens but a political minority, with no hope of leading a government. The Indian National Congress, the largest and main political party, had long advocated for such a united India.

However, given that in British India Muslims were around 25 percent of the population, a united India would be dominated by majority Hindus. Under British rule, Muslims had come to enjoy representation through separate electorates and reserved legislative seats.

For Jinnah and the Muslim League then, the key issue was to ensure that Muslims had equal political representation in independent India. This was not going to be possible under the Congress plan for a unified India with a strong center.

Another option was to make India and Pakistan part of a federation. There were many other such combinations that were proposed. The inability of Indian political leaders, however, to work together at this crucial moment made negotiations difficult.

Some scholars argue that it was Jawaharlal Nehru, leader of the Indian National Congress at the time, who insisted on a "secular" united India and thereby paved the path for a division.

However, partition was not, even at this late date, a necessary condition for the creation of the new nation of Pakistan. One possibility would have been India and Pakistan sharing political power in a federation.

Two things severely impacted the direction such negotiations would take.

The first was the start of communal riots between Hindus and Muslims in Calcutta in August 1946 which quickly spread to different parts of eastern India. Although Gandhi's efforts were able to quell the violence by December that year, the damage had been done.

Whether Hindus and Muslims would be able to live together – even though they had for centuries – became an urgent question in the minds of both Indians and British leaders. Partition emerged as a plausible solution.

Indeed, sizeable groups of Hindus from both Bengal and Punjab – the two major provinces that would be split between India and Pakistan – began to urge for such an outcome along with the Muslim League's followers.

Amid such confusion, the last viceroy of India, Lord Louis Mountbatten arrived in India from London in March 1947 with the mandate to transfer power quickly. Mountbatten, in an attempt to resolve the political impasse, persuaded many Indian leaders to accept a partition.

Consequently, Mountbatten's Plan of June 3, 1947 announced that not only would India gain independence in August 1947, a full year ahead of schedule, but also that it would be partitioned so as to accommodate the demand for a Muslim homeland.

Decisions made behind closed doors would decide the fate of millions.

Bangladesh Hindus Independence Day India Jawaharlal Nehru Mahatma Gandhi Mohammel Ali Jinnah Muslims Pakistan Partition Sikhs
If you value our work, we have an ask: Our journalists work with TruthSeekers like you to publish fact-checks, explainers, ground reports and media literacy content. Much of this work involves using investigative methods and forensic tools. Our work is resource-intensive, and we rely on our readers to fund our work. Support us so we can continue our work of decluttering the information landscape. BECOME A MEMBER
📧 Subscribe to our newsletter here. 📣You can also follow us on Twitter, Facebook, Instagram, Youtube, Linkedin and Google News