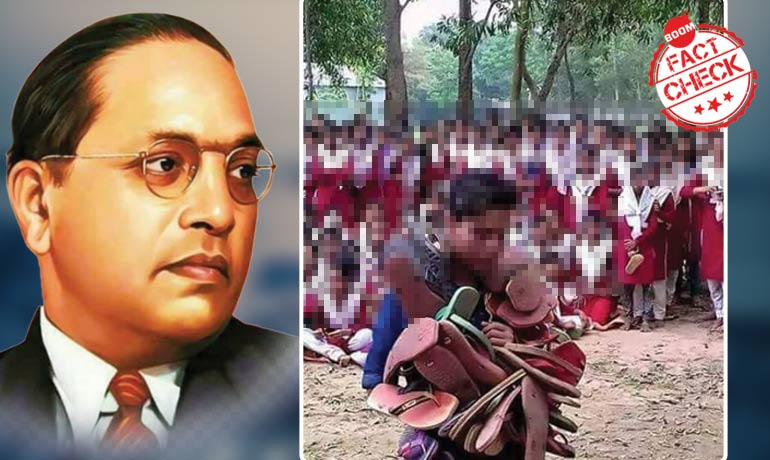 A viral image featuring a youth wearing a garland of shoes claims that the boy was humiliated for chanting a few quotes by Dr. Babasaheb Ambedkar during his school assembly is misleading. Post the humiliating incident, the boy committed suicide, claimed the Facebook post posted with the image.

(This is not an ordinary photograph but is the reason for a suicide. This kid was oppressed by the upper classes in his school's morning assembly for speaking a few lines about BR Ambedkar. The veracity of the picture has not been determined yet but this did occur in Bhivri taluka from Pune. Source is unknown)

BOOM found that the image is originally from Basabaid village, Ghatail taluka, in Tangail district of Bangladesh where the boy in the image was punished for harassing a school student in 2017. The boy was known to frequently harass the school student.

This incident occurred on April 2017, after the boy, a 12th grade student from Sagardighi College, used to frequently harass this school student. Before this incident, the boy had tried to pull the girl's hand according to reports BOOM found in two Bangla newspapers, Kalerkantho and Daily Marsangbad. When the village elders tried to catch him, he ran away on his scooter.

The parents of the girl student created an uproar and Mostafa was caught red-handed as well as punished for his activities. The garland was made from the shoes of the girls in the school.

The article further states that Mozammel Haque, the head teacher of the school said that they wanted to set an example against sexual harassment.

None of the articles had any mention of the boy committing suicide after this episode.

Claim Review :  Dalit youth committed suicide after he was made to wear a shoe garland for talking about Ambedkar in school assembly in Pune
Claimed By :  Social Media
Fact Check :  False
FAKE NEWS