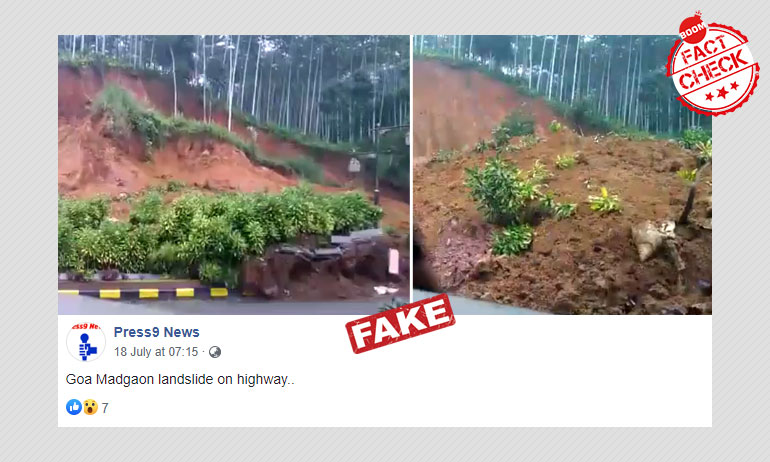 A video of a landslide that occurred in Indonesia in April has resurfaced as an incident from Madgaon highway in Goa on social media. The video shows an elevated land caving in and damaging a road, as a biker runs for shelter. It is doing the rounds on Whatsapp with the caption, "Madgaon Goa highway."

The video has also been shared on Facebook with the same caption.

The same clip was earlier viral with the narrative that it showed a landslide that occurred in the Shillong-Guwahati Road, post cyclone Amphan, that wreaked havoc in eastern India.

Below are a few posts which claimed that the video is from "Shillong - Guwahati Road".

BOOM ran a reverse image search on a few key frames of the footage and found that it is from Indonesia, where land caved in an area of West Java on April 9, this year.

An Indonesian news channel, Metro TV, shared the entire video of the incident on their YouTube channel. According to the description of the video, the incident occurred in West Java's Cianjur on April 9. The road that connected two districts had been damaged because of the landslide, thus affecting access to several parts of sub-districts of South Cianjur.

IDN TIMES JABAR, an Indonesian media further stated that the viral video of the landslide was recorded on cellphone and was viral. It also quoted M Irfan, the Secretary of Regional Disaster Management Agency from Cianjur Regency as saying that when the incident took place, there was no heavy rain.

The incident was also filmed from a different angle in the below video.

In the 30 seconds video which was uploaded on social media earlier in May, a logo of 'DY365', an Assamese news channel can be seen. BOOM searched for the video and found the entire clip which stated how a video of landslide in Indonesia was being circulated with a false claim. From a time span of 7:10 seconds to 9:56 seconds the anchor can be heard discussing the video and how it is viral with a false context.

Meghalaya Police through its official Twitter handle on May 21, 2020 also clarified that the video clip is from settlements of Chiangjur and Sukanagara in Indonesia and not Meghalaya's National Highway.

A video clip of a Landslide which is being circulated on social media is from settlements of Chiangjur & Sukanagara in Indonesia, NOT from National Highway of Meghalaya.

We request citizens not to share or circulate the video clip with false content or caption. pic.twitter.com/evQ3UvZm0F