A video of birds flocking together in Ahmedabad earlier this year has been falsely linked to the COVID-19 lockdown and the subsequent movement of wildlife in human habitats.

The video shows hundreds of birds flying together in coordination. The phenomenon, known as murmuration, refers to hundreds, sometimes thousands of starlings flying and swooping in an intricately coordinated pattern. BOOM reached out to a forest official in Gandhinagar, who confirmed that it is a common sight in the area.

The murmuration video is viral with the message, ''Today at Ahmedabad Riverfront... See how nature is celebrating the peaceful coexistence of Human and Non-human beings in Corona regime"

Prime Minister Narendra Modi announced a countrywide lockdown on March 23, soon after several COVID-19 positive cases were reported in the country. The lockdown is a precautionary measure of social distancing to curb the transmission of the novel Coronavirus. As a result of the restricted movement in the urban area, videos of wildlife moving around on roads are flooding the internet.

BOOM received the video via its WhatsApp helpline 7700906111 for verification of the claim. 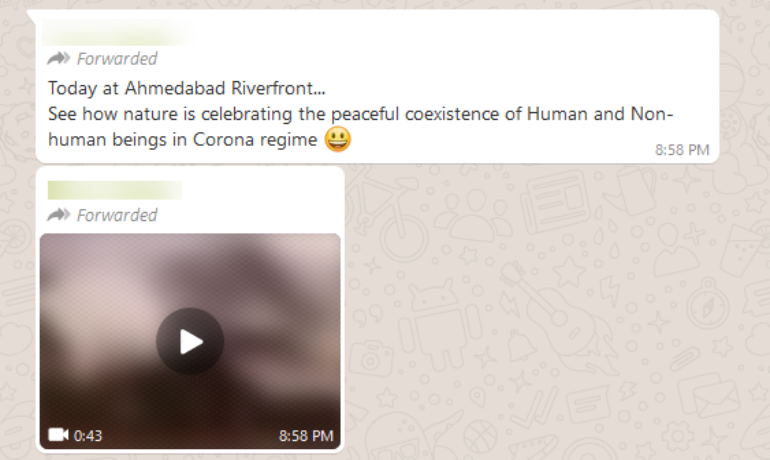 Surreal!!
Today at Ahmedabad Riverfront...
See how nature is celebrating the peaceful coexistence of Human and Non-human beings in #CoronaTimes !! pic.twitter.com/6yBft4Soal

BOOM found that the video is more than a month old and is not related to the present lockdown in the country.

The video was uploaded to YouTube on February 13, 2020 by Times of India.

An excerpt from the TOI report reads, "Residents of Ahmedabad were taken in for surprise when hundreds of birds flocked together in sky. The spectacular scene from riverfront left viewers spellbound. An undated video of hundreds of birds flocking together is being widely shared on social media. Flocking together is a phenomenon called murmuration wherein birds fly in swooping, intricately coordinated patterns through the sky."

BOOM ran a keyword search by using the words "hundreds of birds flocking together" on Facebook and found a post with the same video shared on February 12, 2020. The user credited the video to @ThumarChirag.

Taking cue from this we found the Twitter account of Chirag Thumar, a digital marketing professional based in Gujarat. On February 11, 2020 Thumar tweeted the 45 second long video; Thumar also pinned the tweet to his profile.

BOOM reached out to Thumar who confirmed to us that he had shot the video. Thumar told BOOM, "I shot the video near Sabarmati Riverfront of National Institute of Design around 6 am on that day. I tweeted it as well."
According to Thumar, he stays 3 kms away from the area and had gone there for cycling with his brother-in-law, who was also seen in the video.

Below are two frame comparisons of the viral footage and the video uploaded by TOI respectively. The murmuration in the area of Ahmedabad is a common sight. We contacted Bhuj based journalist Ronak Gujjar, an environment and wildlife reporter, who had earlier shared a similar image of murmuration. Gujjar corroborated the same.

We also reached out to a forest official in Gandhinagar circle who said, "It's a very common phenomenon when migratory birds go back to their destination. This happens every year. As people are busy in the daily routine, this year due to the lockdown they are observing nature closely."

Update: The article was updated on August 24, 2021 to include Chirag Thumar's quote.

Also Read: Video From Azerbaijan Falsely Shared As Spanish Police Enforcing A Lockdown
Claim :   Video shows birds flocking in Ahmedabad post the COVID-19 lockdown
Claimed By :  Facebook Posts, Twitter & WhatsApp message
Fact Check :  Misleading
Bird Murmuration Ahmedabad Gujarat Rosy Starlings Viral Video Coronavirus COVID-19
If you value our work, we have an ask: Our journalists work with TruthSeekers like you to publish fact-checks, explainers, ground reports and media literacy content. Much of this work involves using investigative methods and forensic tools. Our work is resource-intensive, and we rely on our readers to fund our work. Support us so we can continue our work of decluttering the information landscape. BECOME A MEMBER
📧 Subscribe to our newsletter here. 📣You can also follow us on Twitter, Facebook, Instagram, Youtube, Linkedin and Google News 📝Stay updated with all our latest fact check stories.