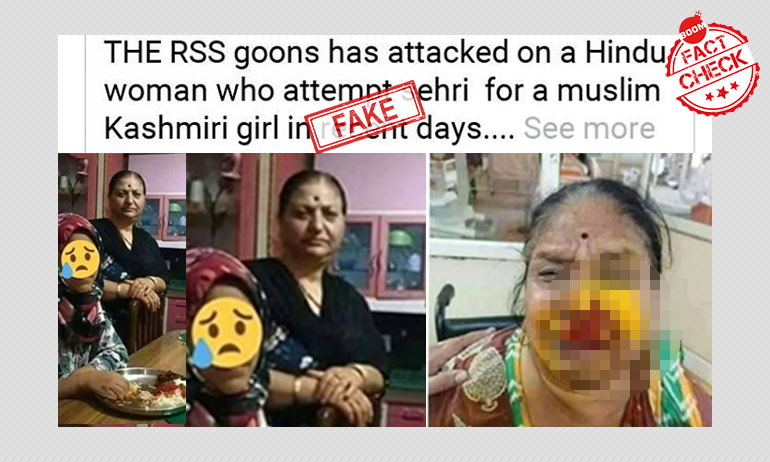 A set of two unrelated photographs is being widely shared on social media with claims that a Hindu woman was attacked by Rashtriya Swayam Sevak (RSS) members for preparing Sehri for a Muslim girl.

One of the images shows a woman standing behind a girl having her meal while the other image shows an injured woman with a bleeding nose. Turmeric has been applied on the nose of the injured woman to control the bleeding. The caption of the viral posts falsely links both the photographs and claims that the woman was injured as a repercussion for treating a Muslim girl with Sehri. Sehri is the meal eaten before dawn during the Islamic month of Ramadan. It is an elaborate meal that one eats before starting the fast.

BOOM found out that the two pictures in the collage are unrelated and the women shown in them are different.

The viral posts are accompanied by a caption which reads, "THE RSS goons has attacked on a Hindu woman who attempt sehri for a muslim Kashmiri girl in recent days. India is occupied by RSS. They have full control over media, judiciary, law enforcement & national securities. Would this country remain stable if this remains carried on."

BOOM reverse searched the image and found a Twitter handle that had shared the same photograph on April 25, 2020. The photo has a timestamp of April 25, 2020, 3.41 am on it. Incidentally, April 25 was the first day of the holy month of Ramzan (Islamic month of fasting). The photo was credited to Preduman Goja.

BOOM looked for Goja's profile on Facebook and found one. The profile mentions Goja as a resident of Anantnag, Jammu.

We contacted Preduman Goja, a Kashmiri Pandit living in Anantnag, via Facebook. He told BOOM, "It is a routine post for serving Sehri. The girl in the photograph is my friend's daughter, who is living with us for studies and due to the lockdown, she could not join her parents during Ramzan." Goja however did not clarify if the woman in the photograph was his wife.

A reverse image search on the image which shows an injured woman led us to a tweet from February 24, 2020.

The tweet - a set of four disturbing images - was a reply to a tweet by journalist Rana Ayyub.

The Twitter user wrote: "#Khambhat Gujrat they are testing the patience of majority and initiating the one sided violence. people like u are responsible for such incident. we knew u r waiting for moment when reactions take place to capitalise ur agenda (Sic)."

we knew u r waiting for moment when reactions take place to capitalise ur agenda .

Taking cue from the tweet, BOOM ran a keywords search on YouTube with the words 'Khambat', 'Gujarat', 'Violence', and hospital. One of the thumbnails of a news bulleting had the image of a woman who resembled the injured woman in the viral post.

BOOM watched the video uploaded on TV9 Gujarati and saw the same woman appear at the time stamp 1.40. We compared a screenshot from the video with the woman in the vial post and found several similarities.

The comparison of both the images can be seen below.

According to news reports, communal violence broke out in Gujarat's Khambat town on February 23. Akbarpura area of Khambat was the epicenter of the riot.

To read more about the incident click here and here.