A disturbing image of a three-year-old boy clicked in the aftermath of his grandfather's death allegedly in a crossfire between militants and Indian security personnel in Kashmir on July 1, is being peddled on social media with a false claim.

The heart-rending image has been shared with a caption insinuating that the boy is carrying a stone to attack the Central Reserve Police Force (CRPF) personnel seen in the background of the image.

The viral picture shows the boy walking away from the body of his grandfather lying on the street. In the background, one can see a CRPF personnel signalling him to move away. The right hand of the boy in the picture has been circled in the image.

Also read No, This Video Is Not Of Apache Helicopters Flying Over Pangong Lake

A caption with the viral image reads 'This Little boy Holds a stone in his hand after seeing how his Grandfather was killed by Forces in Kashmir...Can anybody guess who is going to be his Target and why he picked up the stone????? Is an inevitable question? That is needed to be answered'.

You can view the post here and its archived versions can be checked here and here. 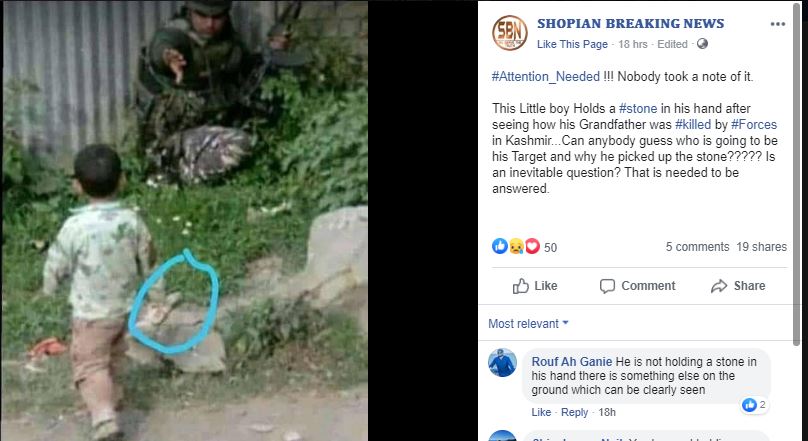 The image is viral from several Twitter handles too.

BOOM compared several pictures of the same incident clicked from different angles and found that what is being identified as a stone in the child's hand is actually a portion of a rock seen in the background.

We went through several news reports on the incident to get a clearer image. We could not find many pictures of the incident as there were no photojournalists present at the encounter site at the time of the incident.

"It was not an operational encounter and there was no photojournalist present at the place," CRPF spokesperson Junaid Khan told Outlook.

We noticed that in the images on social media where the boy is sitting on his grandfather's body, trying to wake him up, there are three rocks jutting out from the ground by the road.

BOOM then checked the other image where the boy is seen walking towards the CRPF personnel, his hands are swinging. The left hand is ahead of him while the right hand is parallel to his body.

The boy's clenched fist blends in with the edges of one of the rocks that lies ahead of him creating an illusion.

BOOM compared both the images and found that it is an illusion of a stone in the boy's hand that has been misidentified as a stone. (Circled in blue) 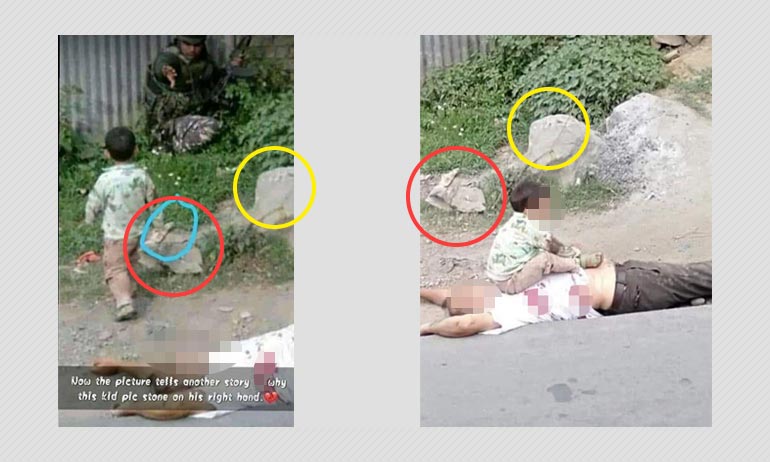 BOOM also came across a report about the incident published in India Today which mentions about the same picture. The report does not mention a 'stone in the boy's hand'.

According to news reports a 60-year-old civilian, who, along with his grandson was passing through the area in his car, got stuck between the exchange of fire. The old man had suffered two bullet injuries and died on the spot. Social media is now rife with claims that bullets from police, and not militants, claimed the life of the old man. The victim's family have now released videos claiming that the old man was dragged out of his car before being shot at point-blank range. However, BOOM could not independently verify the claim.

Claim :   Photo shows boy who lost his grandfather in Kashmir is holding a stone
Claimed By :  Facebook pages
Fact Check :  False
Kashmir Kashmir valley kashmit encounter sopore encounter fact check Fake News kashmir boy kashmiri child 3 year old kashmiri boy CRPF Jammu & Kashmir
If you value our work, we have an ask: Our journalists work with TruthSeekers like you to publish fact-checks, explainers, ground reports and media literacy content. Much of this work involves using investigative methods and forensic tools. Our work is resource-intensive, and we rely on our readers to fund our work. Support us so we can continue our work of decluttering the information landscape. BECOME A MEMBER
📧 Subscribe to our newsletter here. 📣You can also follow us on Twitter, Facebook, Instagram, Youtube, Linkedin and Google News 📝Stay updated with all our latest fact check stories.