A doctored screenshot of a Hindustan Times article is doing the rounds of the internet, where Home Minister Amit Shah purportedly speaks of changing the demographics of Kashmir, so that it is no more a Muslim majority region.

BOOM found several discrepancies in the screenshot, which did not match Hindustan Times' (HT) writing style and design. Furthermore, Neeraj Chauhan, Associate Editor of the Hindustan Times - and the person whose name appears in the byline of the viral screenshot - confirmed in a tweet that the screenshot is not of the article written by him nor was it published on HT's website.

BOOM was tagged in a tweet by Chauhan, where he stated, "A FAKE news is doing rounds on whatsapp with my name. This isn't my story or on HT website. Somebody has edited this and spreading it. This is absolutely FAKE. Request all fact-checkers to please see (sic)."

A FAKE news is doing rounds on whatsapp with my name. This isn't my story or on HT website. Somebody has edited this and spreading it. This is absolutely FAKE. Request all fact-checkers to please see. @free_thinker @AltNews @boomlive_in @syednazakat @smhoaxslayer @jencyjac pic.twitter.com/k3bBIdWv9w

The headline in the fake screenshot contains a quote by Shah stating, "How can we allow one state to have Muslim majority population when whole of India is Hindu majority, we will change Kashmir demography in just 4 years". The headline also states that this quote was a statement from Shah to the Vishwa Hindu Parishad (VHP).

The rest of the piece talks about how Hindus will be allowed to settle in Kashmir in large numbers. It also mentions that former Jammu and Kashmir Chief Ministers Farooq Abdullah and Omar Abdullah were taken into confidence and "had signed the law in exchange of their releases from the detention".

Former Jammu & Kashmir Chief Minister Omar Abdullah also tweeted about the screenshot, stating that it is "doing the rounds in Kashmir at the moment". He goes on to state that the screenshot is a "badly made photoshop job by some IT cell somewhere".

There is a screen shot, purportedly of today's @htTweets, doing the rounds in Kashmir at the moment. The poor English used in the "article" should be enough of an indicator that this is a badly made photoshop job by some IT cell somewhere. #FakeNewsAlert

Upon closer look, BOOM found that the article in the screenshot was indeed riddled with mistakes such as repetitions of phrases, missing punctuation and incorrect use of tenses, which is unusual for a mainstream newspaper. 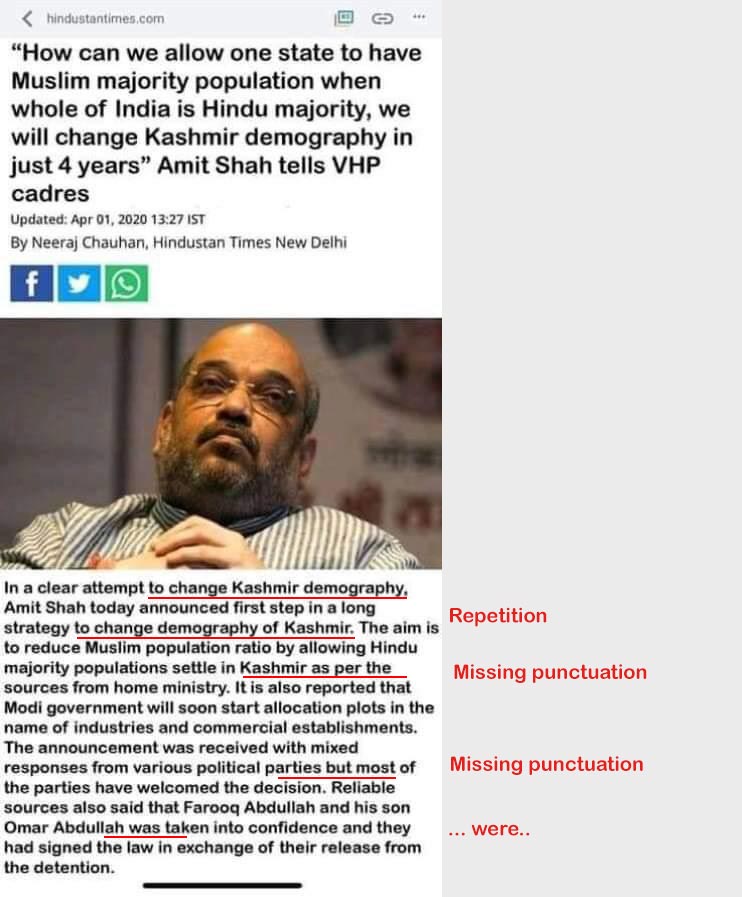 Finally, we found an HT article by Chauhan, published on April 1, which talks about a similar topic - the reworking of Kashmir's domicile law by Amit Shah, to include residents for 15 years can apply for jobs and settle in the region. The article carried the exact featured image of Shah as in the fake screenshot.

However, the excerpt of the article stated something contradictory to what was written in the screenshot: "Home Minister Amit Shah had assured a delegation of Kashmiri leaders last month that the apprehensions about the union territory's demographic changes were baseless." 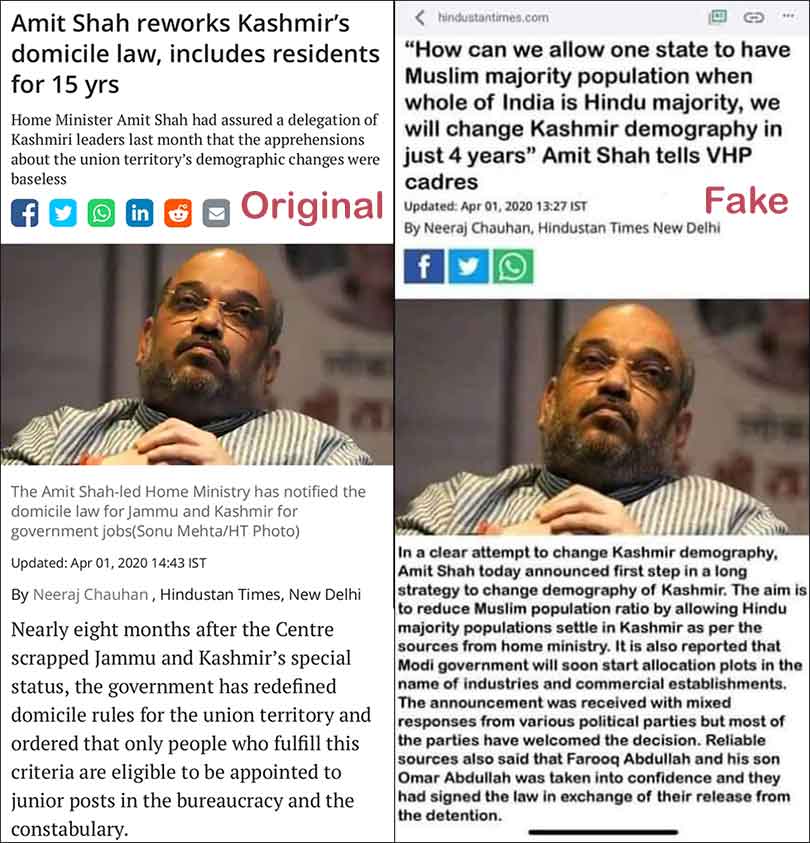