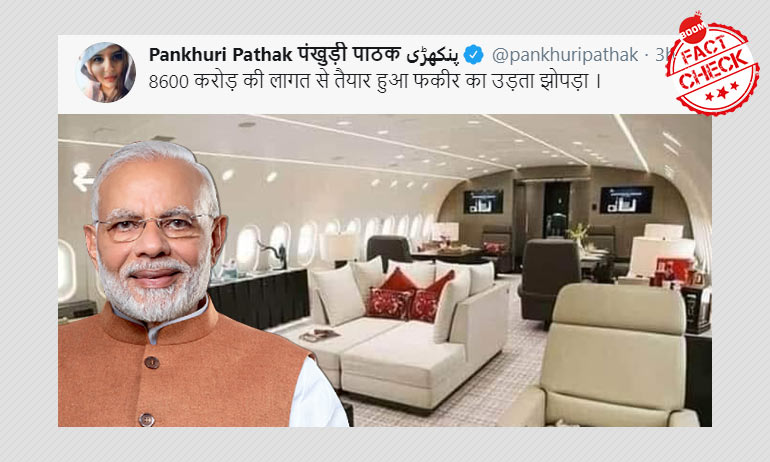 A photo of an interior of a private chartered aircraft's interior is being shared with a false claim that it shows the interior of the Air India One, the aircraft to be used by the Prime Minister Narendra Modi.

BOOM had previously debunked the same photo and found that it shows the interior of a VVIP version of the Boeing 787 Dreamliner and not the Air India Force One which is a Boeing 777-300ER.

The image has been shared a week after India received delivery of the Air India One aircraft and is viral with a screenshot ot a Times Now story about the same, to add authenticity to the false claim. The screenshot is from a June 8, 2020 article about Air India One published by the Times Now, titled, "Flown by IAF pilots, fitted with missile shield: All about PM Modi's B-777 VVIP aircraft Arriving in September."

Union Minister for Civil Aviation Hardeep Singh Puri recently criticised Congress leader Rahul Gandhi for sitting on a cushion during his tractor rally in Punjab to protest the new farm laws passed by the Union Government. Gandhi hit back by saying that the Prime Minister Narendra Modi's Air India One cost Rs 8,000 crore of the taxpayers' money and has more luxuries.

BOOM had previously debunked on August 1, 2020 before the Air India One reached the country, when the same photo was viral with a similar claim that it shows the interior of the plane to be used President of India Ram Nath Kovind, Vice President Venkaiah Naidu and Prime Minister Narendra Modi.

We had then via a reverse image search and found an article on the website of Private Fly, a company which provides private chartered flights. The article which carried the same photo is about a Boeing 787-8 Dreamliner that the company provides for chartered services.

Below is a screenshot comparison of the image shared in the viral posts (L) and the image in the article (R).

Below is a collage of the interior of the new Air India One accessed by News18.

The shape and design of the couches and the styling of the interiors is different so is the colour of the wooden paneling and tables. The number of seats and the layout of the seating arrangement is also different compared to the viral photo.