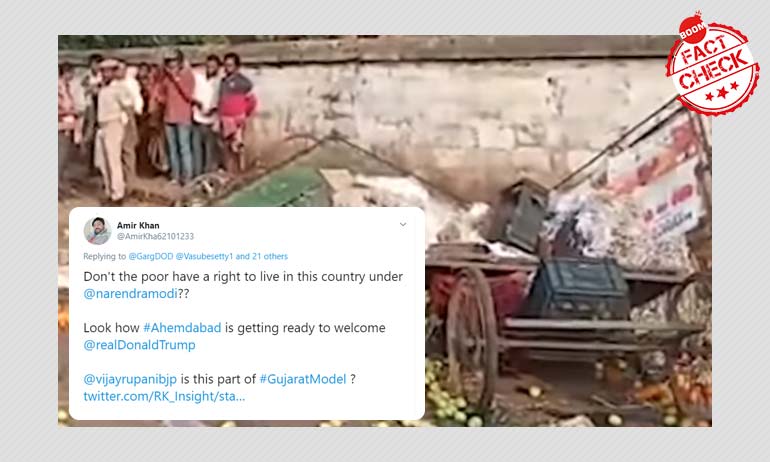 A video of an eviction drive from Odisha is being falsely shared as street side hawkers in Gujarat being evicted in preparation for the visit of US President Donald Trump's visit to the state on February 24.

The video follows an excavator demolishing fruit and carts as officials oversee the whole process. Many carts are then wheeled towards the excavator which goes on to crush them turn by turn.

The video is being shared with the caption, "Don't the poor have a right to live in this country under @narendramodi (Narendra Modi) ?? Look how #Ahemdabad is getting ready to welcome @realDonaldTrump (Donald Trump) @vijayrupanibjp is this part of #GujaratModel?"

The viral caption questions the 'Gujarat Model of development' and even tags the Chief Minister of Gujarat, Vijay Rupani, a Bharatiya Janata Party leader.

View one of the tweets below:

Don't the poor have a right to live in this country under @narendramodi??

Across Facebook it is being shared with similar claims linked falsely to Trump's visit.

Watch the video on Facebook here, and view the archived version here.

Don't the poor have a right to live in this country under @narendramodi??

﻿BOOM had previously debunked the same video being shared as Uttar Pradesh in light of the protests against the Citizenship Amendment Act.

According to reports, the video captures an eviction drive in Bhubaneshwar, Odisha's Unit 1 Market by the Municipal Corporation in January this year. The events of this eviction process were filmed in video and reported by local news networks.

BOOM corroborated snippets from the viral video with footage from Odiya news channel OTV's coverage of the eviction incident, ascertaining them to be the same.

Read this earlier fact check for the same viral video here. Another vernacular Bhubaneshwar based News channel, City Plus Odisha, had also captured the eviction of illegal encroachments in Unit 1 Market, Bhubaneshwar. Their footage is available from YouTube below:

ALSO READ: Video Of Eviction In Bhubaneswar Linked To Anti-CAA Protests In UP