A viral image of a letter from AYUSH ministry acknowlegding documents submitted by Baba Ramdev's Patanjali to get clearance on the ayurvedic company's COVID-19 cure, Coronil Kit is falsely being shared as the company receiving permission to sell the 'Coronil Kit'. BOOM found that the image is a reply sent by the the ministry to Patanjali saying they have received the documents and will study it before submitting a final reply on whether the Patanjali medicine can cure COVID-19.

BOOM also reached out to Dr. D. C Katoch, joint advisor to the Ministry of AYUSH who confirmed the contents of the email and said that the Patanjali cure "is still being researched."

Patanjali Ayurved, founded Ramkrishna Yadav, more popularly known as Baba Ramdev launched a Corona Kit on June 23 and claimed that the kit was "100 percent recovery in three to seven days" from COVID-19. In a press conference, Ramdev claimed that the kit, made with Ayurvedic ingredients- Ashwagandha, Giloy, Tulsi, Swasari Vati, and Anu Taila is not an immunity booster but a definite cure according to clinical trials. Following this, a controversy broke out with officials saying that Patanjali never applied for the Coronil kit to be sold as a cure for COVID-19.

BOOM received the image with the fake claim on its WhatsApp helpline and a search showed that on June 24, Acharya Balkrishna, CEO of Patanjali tweeted the same image, a screenshot of an email copy, calling it a "resolution to the AYUSH controversy". The AYUSH ministry had requested Patanjali to send the documents supporting their claims of their Corona kit curing COVID-19.

Balkrishna did not clarify that the image was a reply by the ministry to Patanjali, confirming the receipt of the documents.

BOOM received the same image on its WhatsApp helpline that read "Finally, Patanjali has permission, Ayush Ministry has given permission, Discussion is over, India's identification is Ayurved. Cure for Corona will be available for Rs. 600 only." (Translated from: आखिरकार मिल गयी पतंजलि को अनुमति। 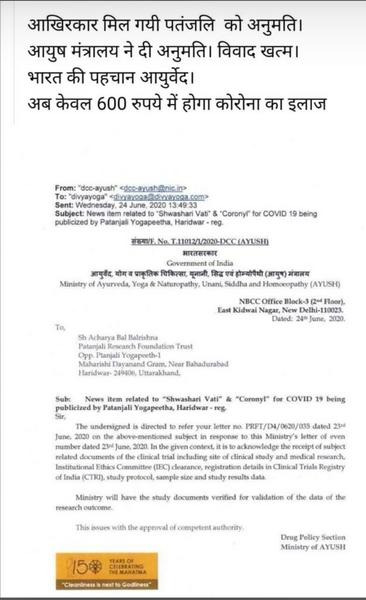 The image of the email and the Hindi caption have also been shared on Facebook. View the archive here.

The text in the mail says, "In the given context, it is to acknowledge the receipt of subject related documents of the clinical trial including site of clinical study and medical research, Institutional Ethics Committee clearance, registration details in Clinical Trials Registry of India, study protocol, sample size and study results data" and it also adds, "Ministry will have the study documents verified for validation of the data of the research outcome" clearly stating that the AYUSH ministry is yet to verifiy the documents submitted by Patanjali.

On June 23, the AYUSH ministry had asked Patanjali to share its study protocol, ethical clearance for conducting the trial from the National Institute of Medical Sciences, Jaipur (NIMS) that had collaborated on the study, the sample size, registration of clinical trial, as well as the name, composition, and scientific relevance of the products. The succeeding email on June 24, only expresses that the Ministry has received all the requested documents. This email does not mention approving or accepting Patanjali's product,

BOOM confirmed the same from a AYUSH ministry official, Dr. Katoch, joint advisor to the Ministry of AYUSH who said that the Patanjali matter is still under process and that the Ministry is yet to reach a conclusion on Patanjali's Coronil Kit, so far.

"The final authorization lies with the State Licensing authority but our expert committee is still going through the details of all the documents," Dr. Katoch stated.

On June 24, the Uttarakhand State Licensing Authority announced that requisite licenses had been issued for for the kit to be sold only as an immunity booster and not as a cure. BOOM had earlier reached out to Dr. Y. Rawat, Joint Director, State Medicinal Licensing Authority, Uttarakhand who explained that the documents the department received did not mention that these products were to cure COVID-19.

"We have sent a notice to Patanjali and are awaiting a response", he said.

The Rajasthan government, where NIMS university is based, said they were not aware of any such clinical trials being conducted in the state. An FIR has been filed against Baba Ramdev and four others for allegedly trying to sell a fake Ayurvedic medicine as a cure for COVID-19.