Social media has recently been flooded with a video showing a group of Indian youths burning face masks, while claiming that they are ineffective against COVID-19 and can lead to increased carbon dioxide toxicity in the body - a condition known as hypercapnia or hypercarbia.

Virr Saxena, Namman Bhasin and Nabeel Ahmed Mirajkar, who made the video, told BOOM that a mandatory policy on face-masks was a way to control the masses psychologically, and instill fear in them. They also claimed they would choose to not be vaccinated, once it become available.

BOOM found the claims made in the video to be false; the effectiveness of masks and face coverings in slowing down the spread of COVID-19 is well-evidenced by numerous scientific studies and empirical data. Moreover, multiple health experts have confirmed to news agency AFP that masks cannot cause hypercarbia on people with no respiratory issues. Dr. Jeenam Shah, a Mumbai-based pulmonologist told BOOM that while prolonged use of masks can cause mild hypercarbia and mild fatigue and headache, it is not a major health issue as compared to COVID-19.

Also Read: No, This Is Not Sushant Singh Rajput's Niece; News Outlets Misreport

After going through their accounts, we found that Bhasin had also posted the video from his Facebook account. 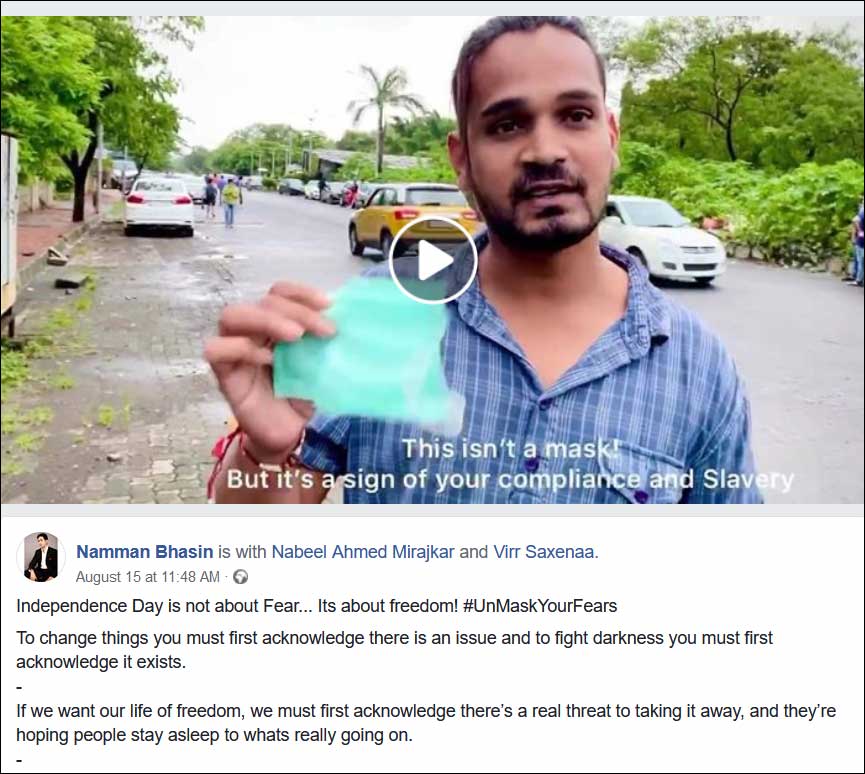 The video was also shared widely on Twitter (here, here and here).

We first got in touch with Saxena, who defended the comments made in the video. When asked what prompted him to make the video, Saxena said that about two months ago he faced breathing issues after continuously wearing the mask for eight hours for work, which got him to question the usage of masks.

"I visited a doctor of a reputed hospital in Mumbai who recommended that I stop wearing masks. The doctor said, 'I had developed lung issues and that masks were harmful. Post that, I went and read up on masks and found videos and articles which strengthened my belief." Saxena refused to name the doctor or the hospital who advised him against masks, and said, "Many doctors hold the same view but are scared to come forward and tell the truth".

We then spoke to Bhasin and Mirajkar, who again defended their views from the video. When asked whether they too had faced any health problems because they wore masks, Bhasin said, "I did not face any health problems but felt discomfort after wearing the masks for even 20 to 30 minutes." He claimed that several doctors - internationally and in India have spoken about how masks are not effective but their videos are being taken down and channels getting blocked. He further said, "Why weren't the same restrictions put in place for tuberculosis when so many people have died because of it and are still dying?"

All of three of them cited research papers which BOOM found were either not peer reviewed, or did not sufficiently back their claims. To this Saxena said, "Everybody starts claiming WHO didn't say this but if we are waiting only for WHO then its not working out because there are other doctors who are doing research. I have read at least 100 articles of different doctors, different papers, different journals who say the same thing that masks are not effective." Mirajkar further said, "If COVID-19 is such a big scene then why is it that 90 percent of those testing positive are people living in building and not those in slums or on the streets, when they are more prone to having such a disease."

Also Read: New COVID-19 Strain Detected In Malaysia? Not Quite

By comparing the photos in the Facebook profiles of Saxena, Bhasin and Mirajkar with the people in the viral clip, we were able to ascertain that all three of them were part of the video along with two more people.

While they provided us a list of journal articles to back their arguments, BOOM found that they did not conclusively provide evidence to suggest that masks were ineffective, or that they caused hypercapnia.

The Effectiveness Of Masks

While there has been a contentious debate on whether masks are effective, there is a strong consensus among medical practitioners that they are indeed effective in slowing the spread of COVID-19.

Several health researchers did a literature review of existing scientific studies on 1) transmission characteristics of COVID-19, 2) filtering characteristics and efficacy of masks, 3) estimated population impacts of widespread community mask use, and 4) sociological considerations, to determine the effectiveness of policies concerning mask-wearing.

They found that wearing of masks by the public is effective when there is a high degree of compliance, and recommended that "public officials and governments strongly encourage the use of widespread face masks in public, including the use of appropriate regulation".

In June 24, The Institute for Health Metrics and Evaluation at the University of Washington forecasted a drop in COVID-19 related deaths by an estimate of 33,000 by October 1, if 95% of the public wore face masks.

We also reached out to pulmonologist Dr. Jeenam Shah, who rubbished the claims around the ineffectiveness of masks. "There is enough evidence now to suggest that masks are effective in stopping the spread of this virus. There is also data suggesting that if two people are wearing masks, then the the chance of transmission between them is less than 10%", he said.

The Case Of Hypercapnia

The claim that prolonged use of face masks can lead to carbon dioxide toxicity in the body (a condition known as hypercapnia or hypercarbia) has been viral since May, and has previously been debunked by news agency AFP.

A spokesperson for Twitter told BOOM, "We continue to action Tweets that directly go against guidance from authoritative sources of global and local public health information in regards to wearing masks and could directly pose a risk to people's health or well-being. You can find our full approach outlined here: COVID-19 Misinfo policy."

A Facebook spokesperson commented, "We don't allow misinformation on our platform that could lead to imminent physical harm and since January, when the WHO declared COVID-19 a global health emergency, we have removed more than 7 million harmful misinformation posts including false cures, claims that Coronavirus doesn't exist, or that drinking bleach cures COVID-19."