Screengrabs from an adult comedy film on YouTube have surfaced with claims that they show Uttar Pradesh's chief minister Yogi Adityanath molesting a woman.

Three screengrabs from the skit, which revolves around a fraudster hermit and how he sexually harasses his female followers in the name of treating them, are viral, along with an image of Yogi Adityanath. One such post takes a dig at the UP CM's character based on the screengrabs. The post reads, "He wears saffron clothes and chants Ram. But when he sees a woman he is titillated." (Original text in Bangla: গায়ে গেরুয়া পোষাক , মুখে রাম আর নারী, দেখলেই অন্তরে জাগে, কাম ছিঃ ছিঃ। ) 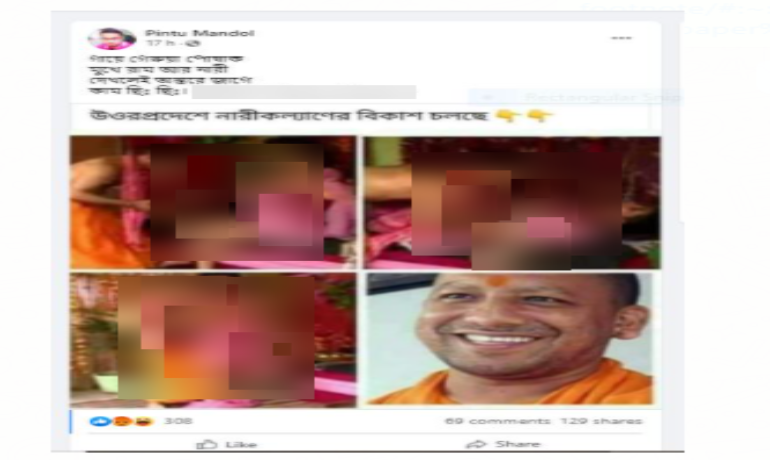 The screengrabs are viral on Facebook with the same narrative. 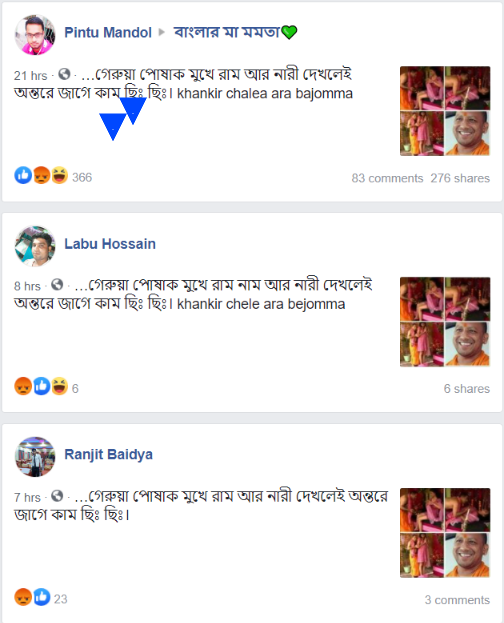 Also read: Cropped Screenshot Of The Wire Article On Durga Puja Is Misleading

Fact Check
BOOM cropped one of the screengrabs and ran a reverse image. We were directed to an sleazy web drama titled Baba Ne Khol Diya Nada on YouTube. The drama revolves around a corrupt hermit, who lures women to sexually exploit them in the name of curing them of diseases. He is eventually called out by a woman for his malpractices. The video has been uploaded by several subscribers and is present on YouTube from as early as 2017.
The duration of the film is 12:52 minutes.
BOOM matched the screengrabs viral on Facebook along with the shots from the YouTube video and found that they were taken on at the 7:08 minute, 7:48 minute and 8.57 minute marks respectively.
Also read: 2017 Video Of Emmanuel Macron Getting Egged Revived With False Claim
Claim Review :   Photo shows Uttar Pradesh CM Yogi Adityanath misbehaving with a woman
Claimed By :  Facebook Posts
Fact Check :  False
Viral Image Fact Check Fake News Yogi Adityanath Uttar Pradesh Uttar Pradesh CM Women Empowerment in Uttar Pradesh crimes against women
If you value our work, we have an ask: Our journalists work with TruthSeekers like you to publish fact-checks, explainers, ground reports and media literacy content. Much of this work involves using investigative methods and forensic tools. Our work is resource-intensive, and we rely on our readers to fund our work. Support us so we can continue our work of decluttering the information landscape. BECOME A MEMBER
📧 Subscribe to our newsletter here. 📣You can also follow us on Twitter, Facebook, Instagram, Youtube, Linkedin and Google News 📝Stay updated with all our latest fact check stories.