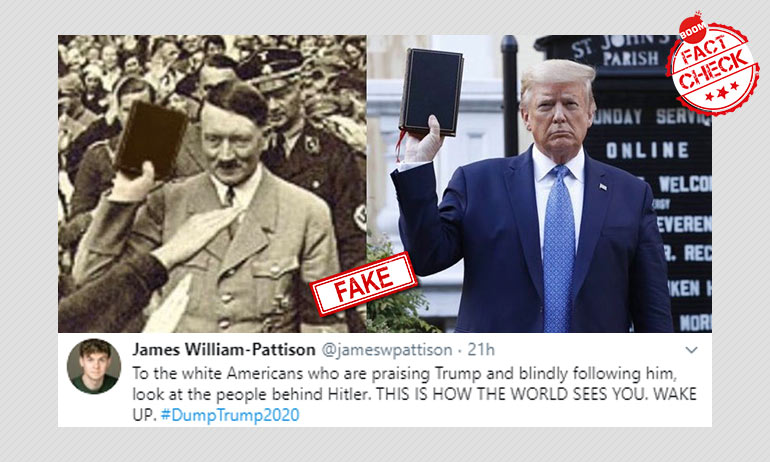 An image comparing US president Donald Trump with German dictator Adolf Hitler is edited. The photograph, a collage of both the leaders, shows President Trump posing with the Bible for a photo-op outside St John's Church after a press conference at the White House on June 1; Hitler can be seen holding what appears to be a hardbound black book in a similar pose, as he addresses a crowd mainly comprising of children.

Hitler's photograph has been edited to include the black book in his hand as a comparison with Trump.

Meanwhile the American president has been widely criticised for posing with a Bible for a photo-op after speaking about the importance of "law and order". On Monday, the American federal authorities applied tear gas to clear the Lafayette Square, an area within the President's Park, so that the president could pose for the photo-op. Demonstrators were staging protests against the brutal death of an Afro-American George Floyd, who was killed in custody by policemen in Minneapolis on May 25. This has triggered a massive outrage across the United States with thousands coming out to protest against racism in the country.

Netizens have slammed Trump and compared him with the Nazi leader after the photo-op.

One such tweet reads, "The Hitler I wonder whose bright idea was this to take this photo op? This had to be some cockamamie brainchild of the chief Moron himself, Trump. Nobody......and I mean NOBODY could be THAT STUPID" (sic.)

I wonder whose bright idea was this to take this photo op? This had to be some cockamamie brainchild of the chief Moron himself, Trump. Nobody......and I mean NOBODY could be THAT STUPID pic.twitter.com/bOv0CJTQ6Z

Another tweet has taken a dig at the supporters of president Trump with the collage of the two images. Click here for the archive.

To the white Americans who are praising Trump and blindly following him, look at the people behind Hitler. THIS IS HOW THE WORLD SEES YOU. WAKE UP. #DumpTrump2020 pic.twitter.com/0qlAfk3UF8

I fucking hate what Trump is doing and shit. This is ridiculous.

The image was also shared by Will & Grace Actor Debra Messing.

A dog whistle to white nationalists and Nazis. pic.twitter.com/FXnOGlkwjc

BOOM ran a reverse image search and found multiple stock image sources which shows Hitler being photographed without any object in his hand. In the stock image, he can be seen greeting children and acknowledging their salutes, as several, primarily children, surround him.

The image can be seen here on Gettyimages, Alamy and Shutterstocks.

The photograph was taken by Heinrich Hoffmann for The LIFE Picture Collection in the 1930s. A description in the stock images reads, "Adolf Hitler Salutes Children - Austrian-born German dictator Adolf Hitler (1889 - 1945) returns the salutes of a crowd of primarily children that surrounds him, Germany, 1930s. (Photo by Heinrich Hoffmann/The LIFE Picture Collection via Getty Images)"

Below is a comparison of the original and edited photograph of the Nazi.