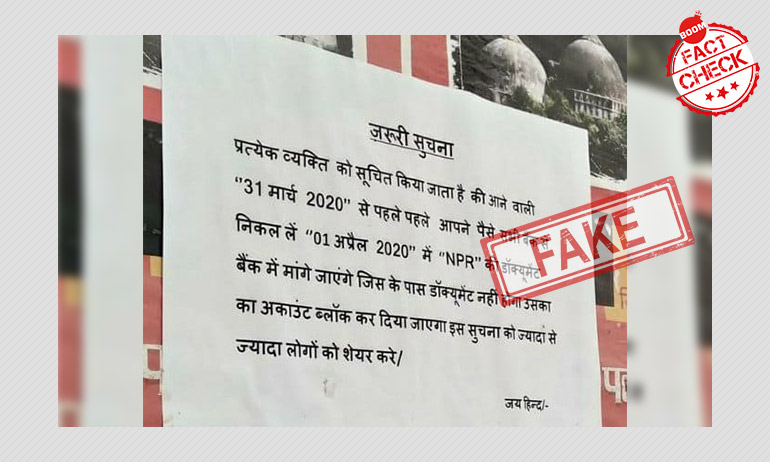 A spokesperson for the Reserve Bank of India has rubbished a viral poster that urges people to withdraw money from their accounts before April 1, 2020, claiming banks will demand an NPR document and block accounts that fail to provide the same.

The NPR is an enumeration exercise that builds a registry of every usual resident of India irrespective of citizenship. It has been carried out in 2010 - 2011 with the data being updated in 2015 and is scheduled to be carried out again from April 2020 onward. Opponents of this exercise, and even states such as West Bengal and Kerala, fear that the data collected would feed into a potential National Register of Citizens (NRC).

The poster in Hindi translates to, "Important notice: Everyone is informed that before "31 March 2020" to remove your money from all the banks. From "01 April 2020", the document of "NPR" will be asked in the bank, those who will not have the document, their account would be blocked. Share this information with many people. Jai Hind"

BOOM received the below graphic on its WhatsApp helpline number (7700906111) from several readers.

On searching with the viral caption on Facebook, we found that the image was viral with the false claim

BOOM contacted a Reserve Bank of India (RBI) spokesperson who dismissed the viral message and clarified that the misinformation has no basis and people should avoid circulation of such rumours.

The RBI has not issued any circular on its website to banks on submission of the NPR document from April 1, 2020. Additionally, we did not find any news reports on the claims being made in the viral notice.

This is not the first time that misinformation linking banks and NPR has circulated online.

Screenshots of KYC forms listing an NPR document as a requirement were viral earlier this year. BOOM had inquired with three banks about the NPR document and the means to acquire it. None of the banks were able to tell BOOM on how exactly to acquire this document. However, all banks made it clear that it was just one on a list of acceptable documents according to Reserve Bank of India (RBI) guidelines.

ALSO READ : A Letter From NPR: The Accepted KYC Document That No One Knows About

RBI guidelines allow the NPR document as one of the several documents which include Voter ID, Pan Card, Aadhaar Card that can be shared as part of Know Your Customer (KYC).