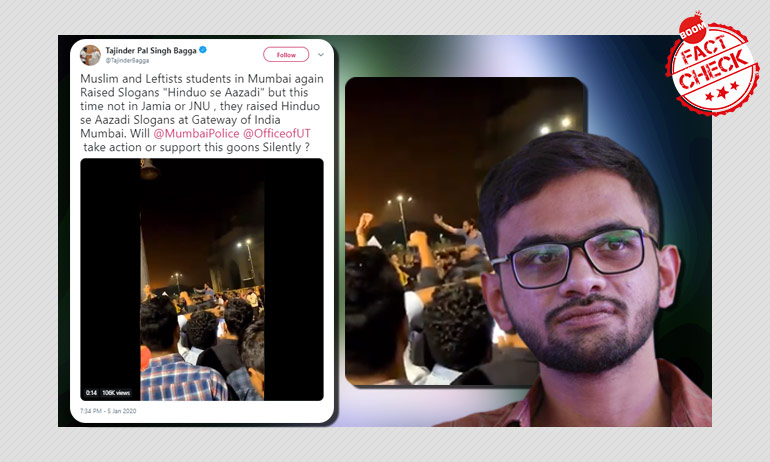 Did activist Umar Khalid shout anti-Hindu slogans during a protest at the Gateway of India in Mumbai? Several Twitter users shared a video accusing Khalid of shouting those slogans while protesting against the violence that took place at Jawaharlal Nehru University in Delhi.

BOOM analysed several videos tweeted by protesters since Sunday evening and found the claim to be false.

Tajinder Pal Singh Bagga, spokesperson of the Delhi Unit of the Bharatiya Janata Party, shared a 18-second clip claiming that students in Mumbai raised slogans "Hinduo se Aazadi". Khalid can be spotted in the video raising slogans as protesters reply with the chorus of Aazaadi.

Muslim and Leftists students in Mumbai again Raised Slogans "Hinduo se Aazadi" but this time not in Jamia or JNU , they raised Hinduo se Aazadi Slogans at Gateway of India Mumbai. Will @MumbaiPolice @OfficeofUT take action or support this goons Silently ? pic.twitter.com/7Cq9ci8tE5

This is for you @BDUTT - don't tell people even this clip is doctored. "Hinduon se Azadi"- where was it raised? This is par. But gaddar is no-no! https://t.co/ZbqevPCZXS

After going through multiple video clips, BOOM was able to access a similar video on social media in which Khalid can be heard clearly shouting "Sanghvaad se Azaadi" (freedom from the ideology of Rashtriya Swayamsevak Sangh) and not "Hinduo se Aazadi" as being claimed.

On comparing the video shared by Bagga and the Facebook post shared by a user, we found that the audio matched as one can hear "Jaativaad se Azaadi" before the alleged slogan and "RSS se Azadi" slogan at the end of the 18-second clip.

In the Facebook clip from the 54 seconds timestamp, one can hear Khalid chant,

We did not find the slogan "Hinduo se Aazadi" anywhere in the video.

One can listen to the amplified version below from the 14 seconds timestamp.

BOOM contacted Khalid who denied raising any such slogan and said that it was false. Khalid sent us another video from the event which we analysed and found that the audio matches with the video we found and confirms that the alleged slogan was not raised.

Lies, brazen lies. Paid pipers of the regime are here to spread lies so that we get busy countering them. And lose focus from the ABVP violence against JNU students. Not happening, shithead. Find a better lie next time. https://t.co/LIQWD07TQd

The chronology of slogans in the video sent by Khalid matches with the Facebook video we analysed. Additionally several other people present at the spot took to Twitter dismissing claims that Anti-Hindu slogans were raised.

I was these last night. I can confirm that not a soul said this shit. The cops were all around. Is everyone associated with the government in some way a compulsive liar? https://t.co/XkraiDyrOl

The Mumbai police was in fact all around us, and maybe they need to look into wilful misinformation and an attempt to provoke violence by you, sir. Not a soul said 'Hinduo se Aazadi' and you are lying. Here are photos of the police from past night: https://t.co/LekcpRAhQ0 pic.twitter.com/WgQyBzbIBk

BOOM contacted Jairaj Singh, Deputy Resident Editor of Mumbai Mirror who was present at the location on Sunday evening. "I was there last night to cover the protests, where I heard Umar Khalid speak and raise slogans. I did not find any statement made against Hindus as being alleged," said Singh to BOOM.