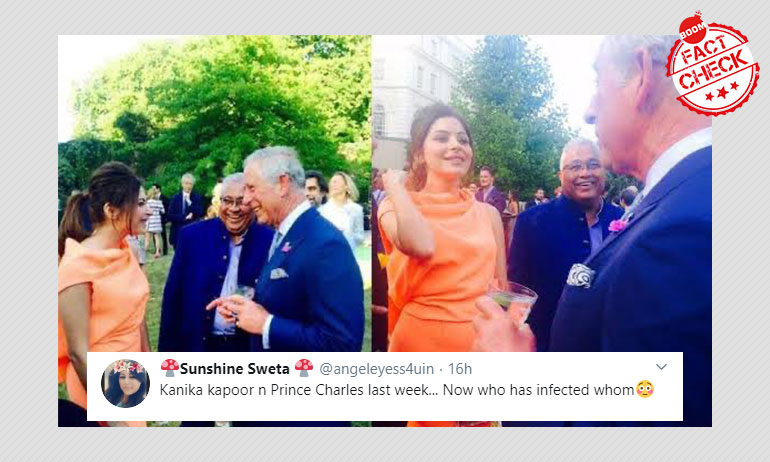 Soon after news of Prince Charles testing positive for Coronavirus broke, photographs of him with Bollywood singer Kanika Kapoor started doing the rounds with claims that the latter transmitted the virus to the British royal.

The image shows Prince of Wales interacting with Kanika Kapoor. Netizens shared the image with speculation that the royal infected himself after the brief rendezvous with the singer. Kapoor had tested positive of COVID-19 on March 20.

Another photograph of Prince Charles shaking hands with Kapoor are also doing the rounds with claims that they shook hands, and that is how the former got infected.

The image is viral on Whatsapp as well.

According to reports, Prince Charles displayed mild symptoms of COVID-19 after testing positive. A spokesperson from the Clarence House announced that the royal is "otherwise in good health." He has been isolating with with the Duchess of Cornwall, Camilla, at Balmoral. A Clarence House statement read, "It is not possible to ascertain from whom the prince caught the virus owing to the high number of engagements he carried out in his public role during recent weeks."

BOOM ran a reverse image search and found that the photo of Kapoor interacting with Prince Charles is not recent but from 2015, when the singer met the royals at the Elephant Family charity event, Travels to my Elephants. The event was hosted by Prince Charles and Camilla, the Duchess of Cornwall in United Kingdom.

The second image, where Kapoor can be seen shaking hands with Prince Charles, was taken in 2018. According to reports, Kapoor was in London for the 10th-anniversary celebration of the British Asian Trust. The event was hosted by Prince Charles. An ambassador of that Trust, she was the only Indian artist to have performed at Buckingham Palace.