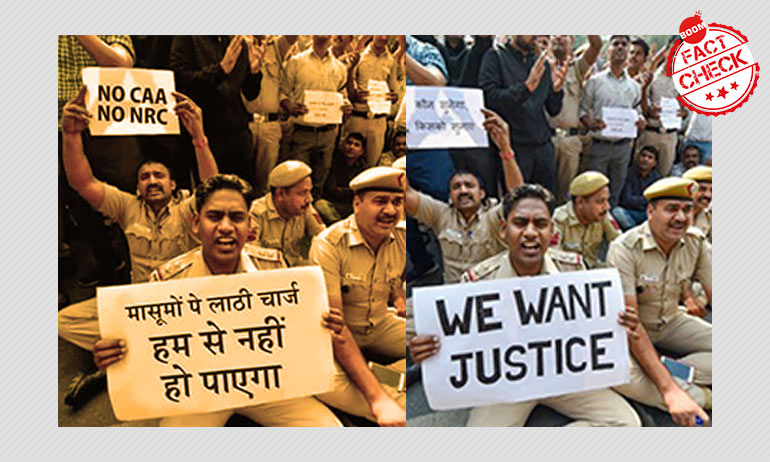 It is the second morphed image shared to falsely claim that police have joined civilians in protest against the Act. The fake image comes at a time when police forces in several states are on edge trying to contain protests against the CAA and NRC (National Register of Citizens). So far 17 people have died in the protests, most of which have been out of clashes with police.

The image shows police personnel holding three different posters 1 -'No CAA, No NRC', 'We Oppose NRC and CAA' and a sign in Hindi that translates to 'the police will not lathi charge innocents'.

All three posters are fake and have been digitally altered from the original image.

﻿A closer examination of the image shows that the posters have frayed edges indicating it has been digitally morphed.

﻿A reverse image search of the image shows the original photo is from November 5, 2019 when police personnel marched to the Delhi police headquarters at ITO as a mark of protest over their leaderships handling of incidents of policemen being assaulted during clashes with lawyers.

On November 2, 2019, a major clash broke out inside the Tis Hazari court premises between Delhi Police and lawyers, allegedly over a spat over parking. Both police officers and lawyers sustained serious injuries and several vehicles were damaged in clashes that shocked the entire country.

The original photo is a Press Trust Of India photo and has been used in an article by Scroll and other news websites.

The signs on the original photo say, 'we want justice' and posters in Hindi that translate to 'who will listen? who do we complain to?' and 'today it's the police, tomorrow?'.