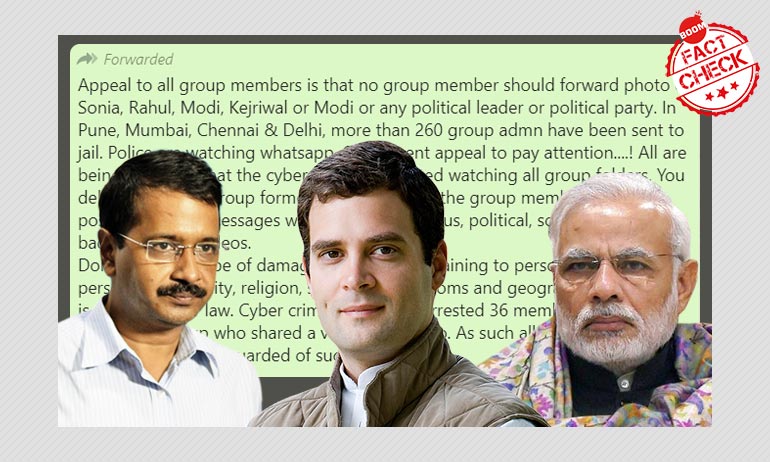 A text message has gone viral on social media, warning users especially WhatsApp admins of police action if their groups are found forwarding photographs of Rahul Gandhi, Arvind Kejriwal, or Prime Minister Narendra Modi. The misleading message claims that police officials are keeping track of WhatsApp groups and recommends group admins to either delete the group or remove the person who sends such a forward.

BOOM received this message on our WhatsApp helpline number (7700906111) enquiring about it.

Also Read: Jail For WhatsApp Group Admins? 5 Ways You Can Be A Smart Admin

This is not the first time such messages have gone viral. BOOM had previously debunked a similar message in July 2018, and found it misleading on multiple counts. The old message matches the viral message except the line, "In Pune, Mumbai, Chennai & Delhi, more than 260 group admin have been sent to jail," which has been added to the viral message.

"In Pune, Mumbai, Chennai & Delhi, more than 260 group admin have been sent to jail."

This sentence could be traced back to a website named Mitaanexpress.com dated December 2018, but it does not cite any source. We did not find any news reports that makes the claim that 260 WhatsApp group admins were arrested in the cities mentioned.

This is not possible as the platform is end to end encrypted unlike other social media platforms like Twitter, Facebook and Instagram where public posts can be examined. In July 2018, we had contacted the State Cyber Crime Branch of Maharashtra who had called the message fake and said that they cannot keep a watch on the information passed around on WhatsApp, especially groups due to encryption.

"An investigation committee is formed to track communal posts and it will be punished under section 44-58 or CPC by tracing the IP address."

The claims made about sections 44-58 under Civil Procedure Code (CPC) mentioned in the forward are incorrect as they are unrelated and does not deal with any activities on social media. BOOM had spoken to cyber security lawyer Apar Gupta back in 2018, who had confirmed the same.

BOOM had then asked Gupta if group admins can be held responsible for content, to which he had said that, "WhatsApp admins should not be held liable. These are groups of college alumni, friends, and family and not created with a criminal intent. The admins would not know what the members will post in future."

Have the Police arrested WhatsApp admins in the past?

In the past, group admins have been held liable for content posted on their group. For example, a 21-year-old Junaid Khan in Rajgarh district ,Madhya Pradesh was held behind bars for five months over a WhatsApp message forwarded by somebody else, reported The Times Of India on July 23, 2018.

He was part of a WhatsApp group in which the admin, Irfan, had posted an objectionable forward. Some locals filed a complaint at Talen police station and a case was registered against Irfan and the "admin".

Police had then stated that Junaid was the WhatsApp group administrator when the case came to their notice, however his family member had contested it.

In another case, a WhatsApp group admin was arrested in Jharkhand's Chatra district for reportedly posting provocative comments and video on the social media group according to the police reported Press Trust of India on March 15, 2019.

Ranjit Kumar Ram was arrested and sent to judicial custody for 14 days after a provocative video and message was posted in the group, according to the police.

What can group admins do to avoid such situations?

Admins or even group members can report hate speech or other objectionable content to their nearest police station. However under section 39 of the CRPC, there is no such obligation. Thus, the police has no power as per law to arrest people for not reporting a hate speech that is put up on the group, say lawyers.