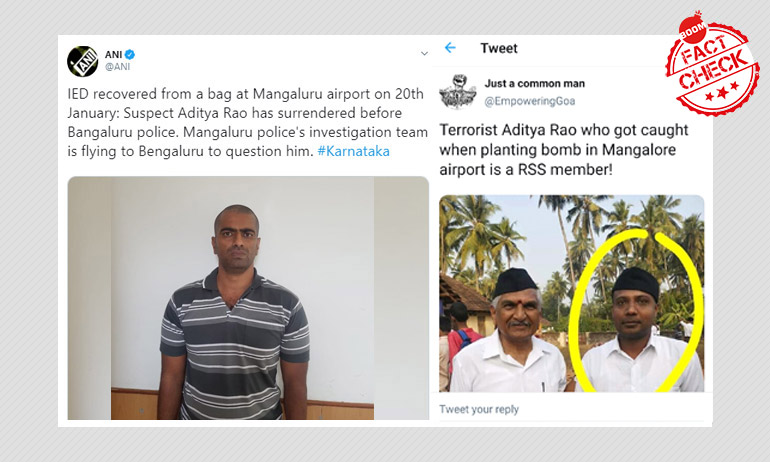 A photo of a businessman who is also a member of the Bharatiya Janata Party (BJP) has been shared with a false claim. The viral social media posts claim that the man in the photo is the suspect arrested for placing an explosive device at the Mangaluru airport. BOOM found that the viral photo is of Sandeep Lobo, an active member of RSS and BJP while the suspect (now in custody) is Aditya Rao, a habitual offender, arrested earlier for making hoax calls.

BOOM spoke to Mangaluru police who confirmed that they are two different people and also reached out to Lobo who explained that he has filed a police complaint against the fake posts. "I am not the person arrested by the police. My photo is being used because I am an active member of the BJP and the Rashtriya Swayamsevak Sangh (RSS)."

The fake posts started doing the rounds on Wednesday, after Rao surrendered to the police in Bangalore and claimed he was the one who placed the explosive device at the Mangaluru airport on Monday. Rao who is currently under the custody of Mangaluru police has been previously arrested for making hoax calls to the Bangalore international airport.

The fake viral posts show a photo of a man in the RSS uniform and some also show the same man posing with BJP MP Tejasvi Surya.

Aditya Rao who kept bomb in Mangalore airport was a RSS member and close to tejasvi Surya and Prabhakar bhat. Please share this to everyone. pic.twitter.com/8o6A9wFIaM

Mangalore Airport, Live Bomb found. And the terrorist too surrendered.

Terrorist Aditya Rao who got caught when planting bomb in Mangalore airport is a RSS member!

We have been saying this for years....

We looked through Lobo's Facebook profile and found that the viral photos including that of him posing with BJP MP Surya were taken from there. Lobo, also put out a statement on his account explaining that he was not the accused arrested for placing the bomb.

Lobo also shared another post from the BJP Dakshani Kannada's handle, which showed him filing a complaint with the police. The post said that Lobo had submitted a written a complaint to the Puttur police against the fake posts and the misuse of his photo. Lobo filed a complaint with member of the Puttur wing of the BJP. The post carries pictures of the complaint copy, which Lobo also sent to BOOM.

We further reached out to Lobo, who said that he first noticed the misleading posts on Facebook. "One of my friends tagged me on a post which had my picture and claimed that I had planted a bomb at the Mangaluru airport. I was shocked to read that. I further searched and found that my picture was everywhere, even on WhatsApp groups with people posting messages against me and RSS and BJP." Lobo told us that he in an active member of the RSS and also works with the BJP IT cell in the party's Dakshina Kannada wing.

We also contacted Mangaluru police and sent them the photo in the viral posts confirm the identity of the accused. A police official not wanting to be named said, "We have seen the viral posts and can confirm that the man in the viral photos is not the arrested accused. Initial investigation has not shown any politicial affiliations of the accused and he is also a repeat offender." The officer further added, "we suspect the accused did it out of spite. We are looking ascertaining his mental health."

IED recovered from a bag at Mangaluru airport on 20th January: Suspect Aditya Rao has surrendered before Bangaluru police. Mangaluru police's investigation team is flying to Bengaluru to question him. #Karnataka pic.twitter.com/BTMnBbzhxJ

The accused Aditya Rao is currently in custody with the Mangaluru police.

But the incident also resulted in other forms of misinformation. Mahesh Hegde, founder of fake news website Postcard, tweeted claiming 'Jihadis' are out to destroy Mangaluru. Hegde who has earlier been arrested for posting fake news of a communal nature, tweeted about the incident saying, "Days ago, Jihadis almost burnt Mangalore city. Now a live bomb has been detected in Mangalore International Airport. Bcoz of few traitors, Jihadis are getting more power. But if police take action against masterminds behind these, Politicians come to their rescue!"

Now a live bomb has been detected in Mangalore International Airport

Bcoz of few traitors, Jihadis are getting more power

But if police take action against masterminds behind these,
Politicians come to their rescue!

Replies in the tweet called out Hegde for his post. Hegde, a resident of Mangaluru has been called out in the past for posting communal and false information along with his website Postcard News also doing the same. BOOM has contacted Hegde for a comment about his tweet and the copy will be updated upon receiving a response.

Several news reports confirmed the name of the accused as Aditya Rao. The Mangaluru police said, "How is his religion important in this case? We cannot answer such a question."