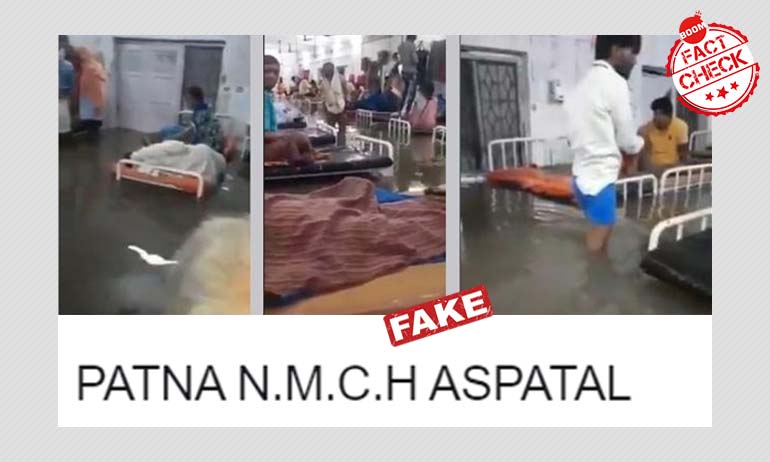 A 2019 video of a flooded ward in Bihar's Nalanda Medical College and Hospital is viral on social media with claims of it being the current situation at the hospital.

The hospital was the first one to be labelled as a dedicated COVID-19 hospital by the Nitish Kumar government in March. Bihar is currently grappling with increasing COVID-19 cases as well as devastating floods. The state has reported 57,024 cases of COVID-19 according to the Ministry of Health and Family Welfare. Close to 50 lakh people in 14 districts have been affected by the floods in the state which has reported 13 casualties.

In this 0:45 seconds video, one of the hospital rooms is flooded with murky rain water almost reaching the patient cots and the mattresses. People are seen wading through the knee-deep water. One of the patients is also heard talking about snakes sliding in the water. The video has returned with the claims that this is the state of the hospital in the month of July 2020.

Several posts on Facebook are circulating with this claim. One of them has amassed a million views. View the archive here.

Other Facebook posts have highlighted that this is the current state of the hospital in their captions. View the archive here.

Also Read:Image Of Hindu Deity Ram On Billboards In Times Square Is Photoshopped

Searching through social media , BOOM found this exact video posted on September 29,2019 by a Twitter user called Farrookh. In his tweet, he tagged many journalists to bring attention to the plight in Bihar.

This video was then picked up by UK based The Guardian which uploaded this video on its YouTube channel on September 30, 2019. Last year, over 100 people had died due to the floods in Bihar.

Indian news agency ANI shared the sad state of affairs in the Bihar hospital in another video on September 28, 2019 discussing the incessant rainfall and flooding in the hospital. The ICU, general wards, as well as the entrance to the hospital are seen to be flooded in the ANI video.

BOOM has previously debunked images of the hospital from 2018 that were also recently shared with the COVID-19 narrative. However, this year, there are no news outlets reporting flooding in the hospital, so far.